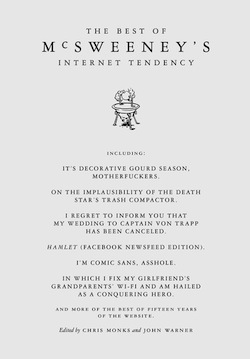 Back in 1998, the internet was young and wild and free. Along with listservs, pornography, and listservs dedicated to pornography, there was a website that ran all its articles in the same font and within abnormally narrow margins. This site was called McSweeney’s Internet Tendency, and many dozens of people read it. Now, fifteen years later, most of those readers have died, but the Tendency still exists, publishing, every day, quasi-humor writing in the same font within the same abnormally narrow margins. The site has no ads, and no revenue prospects, and thus, every year or so, we collect some of the site’s better material and attempt to trick readers into paying for a curated, glued-together version of what is available online for free. The Best of McSweeney’s Internet Tendency is the best and most brazen of such attempts.

Today we feature an interview with one of the book’s contributors, Colin Nissan. Nissan wrote one of the most-read articles in the history of the Tendency, “It’s Decorative Gourd Season, Motherfuckers.” We asked him a few questions about the origins of the story, his writing, and gourds in general.

The Best of McSweeney’s Internet Tendency will only be available for purchase through our store for the first several months of its release (preorder here!). And please don’t forget our novelty tie-in: the It’s Decorative Gourds Season, Motherfuckers mug. It’s perfect for holding your favorite seasonal beverage or old pens you never use but can’t bear to throw away.

NISSAN: I guess you could say the wheels were set in motion from an early age, growing up with a father who was a gourd farmer and a mother with a mouth like a sailor. Truthfully, I’ve always just really loved fall. It wasn’t completely clear to me exactly how much I loved it until I started writing this piece. It turned out I had some serious deadly autumn build-up.

McSWEENEY’S: So it was always gourds from the beginning? It wasn’t “Ornamental Indian Corn Season” or “Pumpkin Spice Latte Season”?

NISSAN: It really just came down to determining what seasonal object best encapsulated the true spirit of fall. That, and whatever sounded better with “motherfuckers” after it.

McSWEENEY’S: Did you have any idea that it would become such a seasonal phenomena?

NISSAN: Absolutely not. I’ll never fully understand why it connected in the way it did, and I’m still a little surprised when it resurfaces every year. I think it tapped into some closeted fall mania that lots of people secretly felt but were never truly comfortable expressing. It’s inspiring to see just how far the whole gourd pride movement has come since then.

McSWEENEY’S: Was there a particular moment when you realized just how big the response to it had been?

NISSAN: There were a few. I remember the day it came out and seeing Roger Ebert tweet it. I took that as a very strange sign that this thing had broader appeal than I had imagined. Plus, up until that point, Siskel had been more of a fan of my writing. Beyond that, the most rewarding and genuinely shocking indicator was the number of English teachers around the country who began emailing to tell they were using the piece as part of their curriculum. Sadly, I fear they’ve since been relieved of their positions.

McSWEENEY’S: Has “Gourds” affected your current writing in any way? Do you find yourself wondering if a new piece measures up?

NISSAN: At first it was a little confusing figuring out how to proceed with my other writing. I kept wondering if maybe I’d stumbled on some successful magic formula—like I was chasing a mythological swearing unicorn through the forest. But I quickly realized there was no formula. And also that unicorns didn’t exist. At a certain point, I just had to put the gourd piece in its own very strange category and stop comparing its response to other things I was writing. Because, clearly, I’d peaked.

McSWEENEY’S: A large part of what makes “Gourds” so funny is the language. Use of F-bombs in humor is sometimes seen as a lazy way to get a reaction from the audience, but here it just works. How do you fucking explain this?

NISSAN: Fudge if I know. It’s tricky because properly placed F-bombs really do have the power to work readers up into a lather, but they also have the power to make them think you’re a juvenile idiot with a terrible vocabulary. For whatever reason, the swearing worked in this case. I think part of it was the fact that despite the language, the voice in the piece was never really angry or negative, he was just incredibly excited. If he was angry, I actually think the swearing might have turned people off.

McSWEENEY’S: Have you thought of writing a sequel?

NISSAN: I have, but I can’t shake the nagging feeling that no matter what other expletive-laced seasonal ode I write, it will always be compared to the gourd piece—and I’m not really up for writing Teen Wolf Too right now, if you know what I mean. Of course, that’s not too say there isn’t a draft of, “Spring Has Sprung, Dickheads” somewhere on my computer.

McSWEENEY’S: Do you think plain old gourds have a complex because they aren’t decorative?

NISSAN: I honestly don’t know how they couldn’t. Coming to terms with being inedible is probably difficult enough, I can’t even imagine what goes through their heads when they realize they aren’t even interesting enough to make into a cornucopia. The whole thing just makes me sad.

McSWEENEY’S: How many decorative gourds do you have in your home right now?

NISSAN: Only a few in my home, but I actually live inside a very large gourd. Not sure if that counts.