As Amy huddled on the floor in the lounge, she watched the gunman James approach, move past, then turn away as he followed the path of the horseshoe bar. When he reached the far wall, “I saw him standing, and he was looking over to the corner where you all were. I saw him lift up his gun. I remembered seeing you sitting back there earlier and just being, like, ‘Oh my god, who else is gonna be harmed tonight?” she said to me. (At the time, I was crouched into a dead end with four other women. The bar fully obscured us from Amy’s sightline.) “I didn’t know who he was shooting at. I was thinking, if he could shoot his girlfriend, then he could shoot anyone else. Then my brain was like, ‘Nope, nope, nope. He can shoot me right here in the bar, and I’m all crouched down. I’m just waiting to get shot, and this makes no sense. I need to get the fuck up. Get the fuck up. He can shoot me when I’m running out, but I’m not gonna wait here.’” 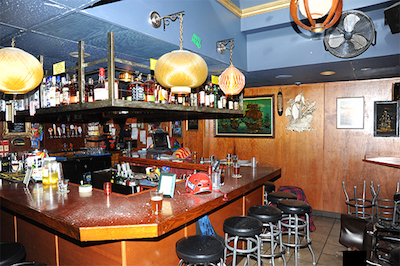 Amy ran from the lounge, through the dining area, out the emergency exit, and onto the street, which was lined with parked vehicles. Somewhere along the way, she heard a second gunshot. “I thought he was gonna kill me. I thought maybe he would come outside, I had no idea. I slid and hid under somebody’s Jeep. A white Jeep.1 I didn’t want him to find me there,” she said. “The ground was so cold, with all the wet leaves and shit. I was trying to calm myself and get my fingers to stop shaking so I could call 911. I didn’t want someone to drive off and run me over. Every time anybody walked down the street, I would be like, ‘Don’t step in the car, keep on fucking moving.’”

Amy was wearing a knee-length black-and-coral striped knit skirt, plain black leggings, a plain black top, a heathered pink hoodie, and fashionable running shoes. In the months after the shooting, these items would seem contaminated. “I love the pieces separately, but I couldn’t wear them all at once, because it reminded me of lying on my belly underneath the car in the cold weather, and the feeling of the dirty wet leaves on my skin. A year and a half later, I was throwing some clothes on in my place, and that’s what I ended up wearing. I had to stay in my apartment an extra ten minutes, just to psych myself up to wear the outfit again. But I was able to do it,” she said. “Those sneakers got filthy when I hid under the car. I could never get them looking clean again after that. I threw them away, and that felt better. They were my favorite sneakers. Wearing them just stopped feeling comfortable.”

Back to the night of the shooting. As Amy stationed herself outside, the cops arrived, and James was killed soon after. “I remember seeing the lights of the police cars and hearing the sirens. And the sounds of all the shots. I can’t tell you how many I heard. He got a punishment of death, which was weird, but it felt resolved. It was like, ‘OK. He is dead. I feel OK he is dead,’” said Amy. “There was a thing going down with him, and that was his reaction — that he had to come and do the harm that he came and did. That’s insanity. And now, there was like this element of the universe meeting that.”

I ask Amy whether she trusted the cops. “I’ve got some serious shit with the police, when it comes to brutality and all that shit,” she said. “But I know there are good cops. My mother was a cop in Boston for 32 years, and she was a good cop. She didn’t talk a ton about her work. It was just really cool. I remember her doing a lot to support the officers she worked with,” said Amy. As for the Twilight situation, Amy felt the police “did what they were supposed to do. They showed up so fast, and I’m grateful they stopped anyone else from getting hurt,” she said. (A couple months later, “there were all these cops in the ER at work one night, and I saw the cop who had to take James’s life. I wanted to say something — to thank him. But I couldn’t go up to him, couldn’t speak. I didn’t have the words,” she said.)

Amy eventually emerged from beneath the Jeep, then she gathered with a group of witnesses just outside the bar while the police took statements. The wait was long, and she made some important calls. “I was trying to get in touch with my mother. It was late in Seattle, then it was really late in Boston. I tried my brother too. But then I was like, ‘What the fuck can either of these two people do right now? Why am I burdening them with this shit?’” she said, and gave that up quickly. “I needed to call work. In my head I was like, ‘I’m just gonna get cleaned up, then I’m gonna go in and do my shift.’ We had a security line we recorded, and I didn’t want this to be a topic of conversation with my coworkers, so I called the backline. I got one of my dearest friends at the job. He was dispatching that night. In my head, I thought I was doing OK. But when I heard his voice, I started bawling and screaming. He was just super, super sweet. He was like, ‘What’s going on, baby? What’s going on?’ He transferred me to my supervisor. I was hysterical. I was telling her about Greg. I was saying I never got a chance to tell Greg how much he meant to me. A month and a half later, she gave me a ride home from work, and she asked me how he was doing. I had no memory of our conversation.”

We return to the Twilight Exit. While Amy and the witnesses waited outside, a city bus arrived to transport everyone to the police station downtown. “I can’t even connect everything. Sometimes it feels like little floating pieces. Some things feel like they happened all right together. I remember the lights in the bus made me feel like I was in the hospital. I remember I’d separated from Christian, and I was thinking he was dead until he got on the bus. When I saw him, I hugged him with everything I had left. I don’t even remember what time I got to the police station. I remember feeling like it was taking forever, and I wanted to go home.2 I called my boyfriend at the time. I was like, ‘I need you to come pick me up.’ I don’t know, I thought he could scoop me up, and I could go home and feel safe, but he was super weird about it. He was like, ‘Oh. I’ve got this thing in the morning. I can’t come and get you.’ He was aiming to work at this other hospital, and I think he had a job interview the next day, but I was like, ‘Are you fucking serious?’”3

Amy can’t remember how she got home4 that night, but Christian was with, somehow. He lived close by. “I’d left my purse and my keys in the bar, so I had to get in touch with my landlord. She was, like, the biggest slumlord in Seattle. She told me that the basement was open, that she kept it open at all times, and somewhere in it she’d hidden an old tin can, and it held the spare set of keys to every apartment. When she told me that, I was like, ‘Are you for real.’ Christian stood at the foot of the stairs while I looked for the can. It was like a horror movie basement. It was cluttered and gross, there were spiderwebs. I found the keys. Otherwise, I would’ve had to sleep on my little back porch,” she said.

Once Christian was sure Amy had gotten in safely, he gave a cordial goodbye and headed out.5 Alone in her apartment, “I was a fucking wreck. I felt cried out. When I fell asleep that night, it was just, like, total exhaustion. My boss gave me the week off. I can’t even remember leaving the house for a couple days. The next day, I had a friend over. She stayed with me, we watched some bad movies on VHS. I was in my pajamas. We had champagne and orange juice, and cashews, and bananas. I hate bananas, but I ate one for the potassium or the protein or whatever. I remember bawling a lot. All I could think about was Greg,”6 she said. “The Twilight was my favorite bar in the entire world. It was the first place in Seattle where I felt absolutely at home. After the shooting, my sense of home felt really shattered. Maybe that’s what it’s like when something like that happens in your own house.”

1 The Jeep belonged to Raven, a karaoke regular. He’d driven in with Christie and Kristin about fifteen minutes prior.

2 Darrel brought more details. He remembered spotting Amy in the waiting room of the police station, and though the two hadn’t formally met, he recognized her as a karaoke regular. “That gal was a really good singer,” he said. “She looked really upset. I went back to where she was sitting, and I said, ‘You’re a great singer, and it’s gonna be fine.’”

3 As far as their relationship, “that was essentially the end. I didn’t hear from him for a week, and I didn’t see him again until I tracked him down, after I got mandated into O.T. I came back to where he was working, and I was like, ‘You’re a worthless piece of shit. Have a wonderful day,’” said Amy.

4 It’s worth noting that Amy lived within walking distance of the Twilight Exit. “The entire time I lived in Seattle, I lived in the Central District, and it always had this weird bad rap,” she said. “I’d never had any issues with the neighborhood. I’d always be out roaming around, and I’d never felt threatened. I don’t know if it was a like a false sense of security. After the shooting, people would say, like, ‘Come on, what did you expect? It’s the Central District.’ It felt like they were referencing a very explicit racial component. But to me, it was like, this could’ve happened any place in the city, no matter how black the population.”

5 The night’s agenda had been unduly heavy. The next time Amy saw Christian, he was alone and quietly reading in a bar. “The awkwardness was palpable. I think we reminded each other too much of that night,” she said. They didn’t hang out again.