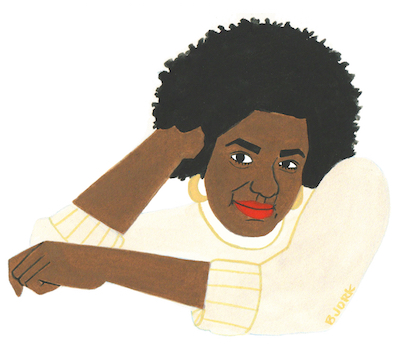 When Amy was in her late 20s and living in Seattle, she worked for a time as an emergency-room security guard at Harborview Medical Center. “I can’t believe I did that job. I was good at it, but it didn’t mean that it felt good,” she said. “We got into some gnarly stuff. When you think of hospital security, you see someone sitting behind a desk looking at a camera, sitting on their ass. That was just not the fucking job. A lot of my coworkers were former military or aspiring cops. We’d get a call, and it’d be a nurse or doctor, telling us someone—usually it was a man—was being super combative, and it was time to restrain him,” said Amy, who is 5’5” with an average build. “You wouldn’t always know the reason that person was acting that way. There were weird dynamics. The nurses got hurt the most, because they were usually the first in contact, and the majority of them were women,” she said. “I had to be calm when things were going south really quickly. A big thing was earning the respect of my colleagues. I had to prove to the guys that I’m someone to rely upon in a fight. That was the hardest thing, giving off that coolness. Like, pretending you’re not afraid when some big dude is in your face is threatening to kick your ass. Calling for backup so you don’t get hurt. Trying to protect other staff from getting harmed,” she said.

“It was a crazy, crazy job, but it was really practical for me, in a way. I needed the work, and it had all these great benefits,” said Amy. She’d found the opening due to Harborview’s affiliation with the University of Washington, where she’d wished to enroll. “If you’re interested in childbirth-education, UW is like a mecca. I never ended up going there, but I’d been trying to get into their system for the sake of tuition reimbursements. I’d applied to so many jobs, I’d kinda forgotten about them all. When I got the call-back, it was like, ‘Of all the fucking things, this is gonna be the one?’” she said.

This was over three years ago, and while Amy no longer does security work, her dreams have stayed consistent. On the phone with me today, Amy mentions she eventually left Seattle and returned to Boston, where she’s from, and now she’s a medical assistant at an obstetrics-and-gynaecology practice. “It’s kind of an incremental job. I’m not attending birth. That’s a little bit sad, but I’ll get there,” she says. Before this, trying stuff out, Amy picked up work as a doula. “Think of it like this: the midwife or an obstetrician is below the waist, and the doula is above the waist, helping to manage pain and using comfort measures, like massage,” she says. She assisted with five births in this capacity. The experiences were “momentous,” and they gelled her larger goals. “I want to be a certified nurse midwife so I can deliver babies and provide excellent cultural, confident, and compassionate care,” she says. Much of this ideology stems from a desire to protect women from what Amy perceives as harsh practices in our standardized medical systems. Amy recalls a conversation she’d initiated with her mother, as an example. “I’d asked about her birthing experience, and what she described sounded so terrible. She’d had to get an episiotomy. That’s when they cut the entrance to your vagina at the bottom. It’s preemptive—for when you’re going to tear. But cutting in a straight line goes against the nature of a tear. Tears don’t go in a straight line, because the muscle and the tissue aren’t laid out in a straight line. So whenever you cut like that, you’re not gonna heal as well,” she says. Amy believes there were other options, but “the doctor told my mom, ‘That’s what has to happen, and that’ll make it easier, and you’ll get sewn back up,’ and she agreed,” says Amy. “The doctors don’t explain it, and people don’t have a ton of information, so they go with the flow.”

Amy has jarring stories about other maternity procedures, but we set them aside to begin our talk about the night she witnessed a shooting at the Twilight Exit. As mentioned, Amy was employed as a security guard in an emergency room. “I was scheduled to cover the night shift, which was always insanity. Earlier I’d had crazy insomnia, so I’d gone to see Ghostbusters II at Central Cinema. I was gonna go home and take a power nap before I went in to work. But then I thought, ‘I am super awake, and I never get to go to karaoke on Sundays,’ so I rode my bike to the Twilight. I planned to just ride up to Harborview after, in time for my shift. It started at 11,” she said. In the lounge, Amy picked a stool along the bar. “I sat right in the center. Whitney was to my left. I’d never seen her before, but I remember her because she smelled like a whole lotta pot. It was hilarious. She was this tiny little thing. A bartender and I were giggling about how stoned she was,” said Amy. “Christian was to my right. That was the first night I met him. He’s so friendly and cute and interesting and smart. I’m just gonna say it, I was flirting hard. I was acting super engaged, and I had my body turned to him.”

Amy didn’t notice the man, James, as he approached Whitney at the bar. “I remember hearing raised voices behind me. The guy was saying something about, ‘My dog. You set me up.’ It was just so aggressive, the way he was talking to her. He was just, like, in her face. He seemed so much bigger than she was. I don’t know if he grabbed her or not. I was like, ‘No, no, no. This is not going down. This is not gonna be ok. This is not gonna fly while I’m sitting right here.’ My brain went into what I do at work. I went shooting up. I was like, ‘Is there a problem here?’ I stood right in front of her. I was puffing up, I was doing what I do. I got in between them, then Greg came over and he said to me, like, ‘Oh, it’s ok. Don’t worry about it.’” As Greg gathered James and steered him away, “I remember looking at Greg and giving him direct eye contact and giving, like, a weird head nod. I was still standing as he walked James out,” she said. Right after, Amy attempted to check in with Whitney. “I just remember being like, ‘So what was that about?’ and she was like, ‘I have absolutely no idea who that was. I’ve never seen him.’ That didn’t sit right. I didn’t believe her. The argument was so intense. Why the hell would he act that way to a stranger? And why would she lie about it?” said Amy.

The exchange still haunts Amy, “especially whenever I’d think about their fucking baby at home. There was a fucking baby at home, by itself. Like: What!” she said. “I think in general, it made me much warier of people and their intentions. Now I listen to my gut, and if it feels like something is off, then I’m not giving the benefit of the doubt,” she said. In the months after the shooting, Amy would struggle with her complicated reaction to Whitney. “I definitely identify as a feminist, but I was angry with her a long time, even for as much as she’d gone through. All I could think was, ‘You could’ve just fucking said what went down, but you couldn’t implicate yourself in doing wrong. You could’ve taken responsibility, but you were being a fucking coward. You brought hell into a space, and you didn’t let anyone know who coulda, like, tried to help,’” said Amy. “I know it’s all just misplaced anger, but it’s true.”

Back to the bar. Amy turned away from Whitney, shook off the uneasiness, and continued her pursuit of Christian, “but I got zero game,” she said. “Later I think he said he had a girlfriend, and I was like, ‘Oh, OK.’ It was cool. I was kinda like, ‘I’m not gonna feel bad about this, or feel like I got rejected,’” she said. Amy put in a karaoke request, and though she can’t remember what song she picked, her collection of favorites include Nu Shooz’s “I Can’t Wait,” Franz Ferdinand’s “Take Me Out,” and Fleetwood Mac’s “Silver Springs.” Twenty minutes passed uneventfully, until James fired his gun at Greg in the alleyway just outside the bar’s entrance.“I was just like, ‘What the fuck. That is so weird. Why would I be hearing that sound?’ I didn’t know what it was. It didn’t register. And then Natalie came in, and she looked freaked out of her fucking mind. She looked horrified. From the point of her being like, ‘Everyone get the fuck down,’ I just read her body language. I was just like, ‘Oh my fucking god.’ The feeling was unreal,” said Amy.

When Amy realized the shooter was James, “my first thought was, ‘He’s gonna remember me interfering. He’s gonna remember me getting in his face, and he’s gonna shoot me. I need to hide.’ I got up from my chair and started to walk towards the door. Everything just got weird and slow. Things got soupy. I wasn’t being logical. I wasn’t thinking ahead. I was literally standing right in the middle of the bar, and then I cowered under a wall, under this little ledge where people set their drinks. Where I chose to hide made no sense. I was, like, super hiding in plain sight,” she said. (Her behavior recalls a passage from David Cullen’s Columbine, describing the surviving students and staff as they were discovered. Many were crouching and “plainly visible under cafeteria tables.”)

“I had my phone on me, and I’d started dialing 911, but I stopped. I thought if he saw me trying to make a call, he’d shoot me,” she said. As James approached Amy on his way to the lounge, “I was crouched, so I couldn’t see his face. I could only see his legs and his arms and the gun. I remember smelling the gun powder. It was so sharp and strong. I was like, ‘This is really fucking happening. This is the due. He’s gonna remember me being Billy Bad Ass. He’s gonna shoot me in my fucking face.’ I had this really weird response to that. I got this stupid smile on my face. It was almost like when you feel the giggles are coming on.”