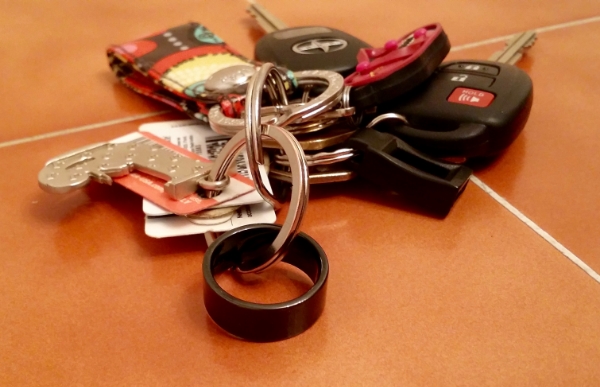 We were married in 2011. Less than a year later, David lost the original band while swimming in the Atlantic Ocean during a summer trip. We immediately went to a shop a few minutes from the beach and bought a stainless steel replacement.

The following year, while visiting David’s parents in California, we threw the second ring into the Pacific Ocean as a symbolic balancing gesture and replaced it with this one, a black ceramic ring.

Over the past year, David lost a lot of weight, and this ring no longer fit him, so he had to get yet another one — his fourth. He suggested that I put the third one on a necklace, but I decided to put it on my key ring, so it would always be with me. Few people know he’s had so many rings, so it’s kind of an inside joke. When I’m by myself and missing him and our daughter, I can slip it over my finger and think of them.

It’s also a spare in case he loses his fourth one!