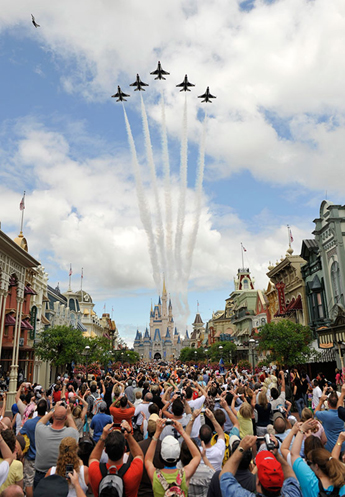 So, this photo leapt out at me from the pages of the New York Times the other day, an air-show flyover at Disney World, the crowd ranged in rapt ecstasy, not unlike the massed swarm at some Aztec sun-worship festival, 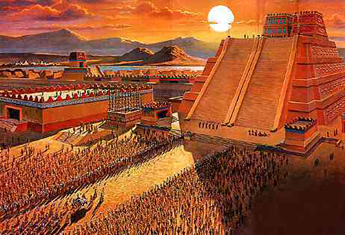 which in turn got me to recalling the crowds ranged in St. Peter’s Square, back in April 2005, at the time of the funeral of Pope John Paul II. 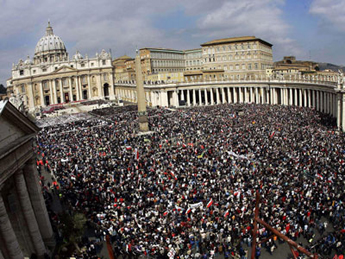 Although, come to think of it, there was something else about the slew of images that emerged from that latter event that may more fully account for this specific trill of associations. Not so much the rapt massiveness of the crowd but rather the behavior of so many of the individuals in these (Disney World flyover; Vatican funeral) and so many other such contemporary crowds—how a lot of people nowadays just seem incapable of experiencing things directly, how everybody has immediate recourse to the mediation of digital photography, a tendency, granted, rendered all the more peculiar in the context of that Vatican processional, 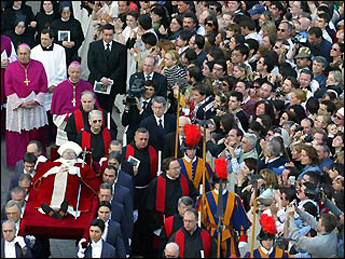 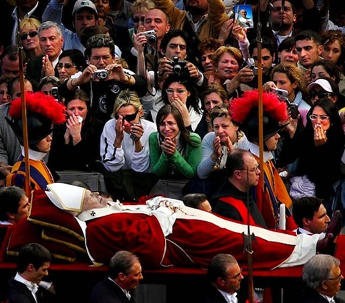 with its throngs of worshippers craning desperately forward, literally inches away from the body of this representative of Christ on earth, in what was surely, for many of them, one of the defining moments of their spiritual lives, and almost every single one of them gazing not at the holy spectacle unfolding right there before them but rather into the miniature simulacrum of that epiphany in the viewfinders poised above their heads …

Which in turn puts me in mind of the last paragraphs from my own forthcoming book of conversations with the artist Robert Irwin (an expanded and updated edition of my 1982 book, Seeing Is Forgetting the Name of the Thing One Sees). How at one point recently the now 80-year-old artist was talking about the fact that he didn’t expect to live

to see the realization of the sort of world his own art has been aspiring toward, that such a realization may indeed well still be several generations off. What, I now asked him, did he have in mind? Was it (I was suddenly in a tweaking mood, wanting to lance the mood of somber sobriety that had strangely overtaken us) a question, for instance, of not yet having sufficient computer power, such that artists in the future, properly endowed with the requisite terabytes, might be able to infuse visors with ecstasies of virtuality barely even dreamed of …?

“Of course not!” Bob erupted. (I’d managed to provoke exactly the rise I was hoping for.) “The point is to get people to peel those visors off their faces, to remove the goggles, to abandon the screens. Those screens whose very purpose is to screen the actual world out. Who cares about virtuality when there’s all this reality—this incredible, inexhaustible, insatiable, astonishing reality—present all around!”

Now, I am not unaware of the paradoxes involved in citing this of all passages, with its utopian aspirations toward a world of unmediated presence, in the middle of a contest veritably steeped in the worshipful celebration of images upon images ranged across screens upon screens. Nor am I oblivious to the way in which Irwin’s entire life project, captured in that 1982 book’s title—this imperative that we stop free-associating like crazy and instead attend (tongue-tied and gobsmacked) to the singular wonder of the object immediately before us—likewise runs entirely counter to the ethos of this contest (and the more recent book that inspired it). Still …