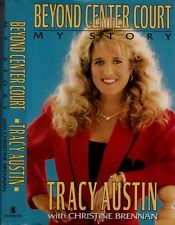 Under Review:
Beyond Center Court: My Story
by Tracy Austin with Christine Brennan
(1992, William Morrow and Company, 224 pages)

Also considered:
“How Tracy Austin Broke My Heart”
by David Foster Wallace; essay;
as published in Consider the Lobster
(2007, Back Bay Books, 343 pages)

It has been proposed in recent years that David Foster Wallace, when writing as an essayist, was unable to resist infusing the non-fictive world with elements from his hyper, vast, fictive imagination. That, in pursuit of the desired comic (cosmic?) effect, Foster Wallace would guiltlessly exaggerate the events that transpired in front of his journalistic eyes so that the essays may hit their appropriate feverish apex. A week on a cruise ship, or a day at the fair, simply could not be so hilarious and revealing of the human condition.

I have now read Tracy Austin’s biography, Beyond Center Court, and also David Foster Wallace’s review of said book, “How Tracy Austin Broke My Heart,” and I can confidently report that, within this essay at least, Foster Wallace could only be found guilty of understating how unrelentingly bizarre the landscape of Tracy Austin’s psyche appears to be.

Tracy Austin, a mid-adolescent tennis professional in the late seventies, was toddling about well-kept Southern California tennis clubs on the daily basically from diapers. Despite being immersed for life in what is indisputably a sport played by and for the upper classes, Austin tries to convince the reader that her family was in fact poor, because they tended to purchase powdered milk, and only ate bacon on special occasions. Foster Wallace writes, in response to this unconvincing factoid:

Stuff like this seems way out of touch with reality until we realize that the kind of reality the author’s chosen to be in touch with here is not just un- but anti-real.

What Foster Wallace does not mention in his review is that, a mere page before Austin talks about powdered milk, she drops this incredible snippet:

At age sixteen, we [the Austin children] each got our own car, so we’d drive separately [to the tennis club]. At one point, there were five Volkswagens in the family.

So, yes, “anti-real” is actually the perfect word to keep in the back of the noggin as one works the long, long slog through Austin’s thin tome. Foster Wallace mentions that Austin dedicates an entire chapter to name-dropping celebrities she has chatted with. Not only is this true (and excruciating to read), but Foster Wallace doesn’t even mention Austin’s chapter-length recitation of the bloom and demise of each and every one of her romantic relationships.

Not only does Austin go on a date with a man who stalked her from airport to hotel lobby, but that episode actually made the cut as she sat down to write her memoirs. Here are three unrelated gems from the boyfriends’ saga that are beautiful examples of Austin’s anti-real way of moving through the world:

It is interesting to note, however, that high school boys start asking you out after you’ve won your first Porsche.

He was the perfect guy. If there had been anything wrong with him, it would have been easy to let him go. But he was perfect.

Next was Greg Winfield, a model, actor, and part-time philosopher whom I dated for two or three months.

Austin’s inability to understand basic finances is a recurring and devastating theme in both Foster Wallace’s essay and Beyond Center Court itself. As Foster Wallace accurately describes, a creepy older man at Austin’s home tennis club uses the prepubescent Austin’s unlikely skill to hustle winning bets against other grown adult men. The creepy man collects his own earnings off of Austin’s tennis prowess and buys Austin gifts like jewelry, which in actuality was probably a whole lot creepier than even Austin’s unwitting description.

Within the span of a single page, Austin mentions that she collected $189,500 in earnings as a sophomore in high school, but was restricted by her father to a $1/week allowance. And then on the next page, Austin says, of that same chapter in her life: “I bought my mom a Rolex watch on one occasion and a full-length mink on another.”

There are similarly insane passages on just about every page of Beyond Center Court, and it would take a book-length exploration and certified psychoanalysts to truly plumb the depths of this ridiculous alternate dimension.

Foster Wallace’s interest in Tracy Austin starts from a genuine place: as a teenager in rural Illinois, Foster Wallace played above average but not remarkable junior tennis. And he could go home from his own tennis matches and watch the same-aged Austin on TV, dominating top-ranked international women’s competition. Realizing that he and Austin were barely even playing the same sport, so disparate were their respective skill levels, Foster Wallace writes:

She was a genius and I was not. How must it have felt? I had some serious questions to ask of her. I wanted, very much, her side of it.

By the time Foster Wallace had gone off to college and prodigiously revved up his writing career, Austin was finished as a tennis player, due to a combination of injuries, and freak accidents (on the brink of comeback, she is hospitalized after getting T-boned by a driver who ran a red light). In the early nineties – when Beyond Center Court came out, and when Infinite Jest was being furiously drafted – Foster Wallace found himself in the bizarre position of being able to articulate Austin’s briefly transcendent career better than Austin could herself. As a tennis enthusiast, Foster Wallace remained permanently agog at Austin’s world-class skills, his own semi-serious forays into tennis instructing him just how impossible it is to achieve professional-level tennis, never mind top-shelf professional-level tennis. As a writer, Foster Wallace can run circles around Austin – just as she could run circles around Foster Wallace on the tennis court – and there is an underlying sense in Foster Wallace’s review that this truth makes for a strange state of affairs indeed.

And so Foster Wallace’s review gloriously expands from the confines of Austin’s insane book, and meditates on what separates professional athletes from those of us watching them splayed on the couch, hands digging in a Ruffles bag. Foster Wallace decides that it is not so much that these athletes are such refined physical specimens. Most importantly, great athletes are able to regularly access fluid states of mental focus that the more anxious among us have perhaps never experienced at any point in time:

The real, many-veiled answer to the question of just what goes through a great player’s mind as he stands at the center of hostile crowd-noise and lines up the free throw that will decide the game might well be: nothing at all.

It may well be that we spectators, who are not divinely gifted as athletes, are the only ones able truly to see, articulate, and animate the experience of the gift we are denied. And that those who receive and act out the gift of athletic genius must, perforce, be blind and dumb about it – and not because blindness and dumbness are the price of the gift, but because they are its essence.

No doubt there are exceptions here – athletes that really can communicate the full feeling of performing on a bright stage – but those exceptions are rare enough that they really just prove the rule.

Even for the devoted sports fan, the post-game interview with the athlete still literally dripping sweat from their competitive conquest – how much more inside access could one get?! – is usually a supremely boring affair. What was just a thrilling victory is reduced to a lukewarm porridge-bowl of platitudes that inspires that most unlikely of actions: emphatically turning the TV off.

How interesting then, that so many athletes who so rarely hold our attention for those thirty-second spans then decide to write an entire book about these same sporting experiences. One would expect nothing other than unmitigated disaster if I, on the strength of my newfound experience reviewing Self-Help Books by Professional Athletes, negotiated myself a roster spot on even a minor league professional sports team. How else would one expect things to go, then, when a person boldly enters the industry of the written word on the basis of their ability to hit/throw/catch a ball? Why such vast numbers of professional athletes take time out of their astoundingly packed schedules to write books, and such bad books, remains a total mystery to me, even – especially – after I’ve just read so many of them.

That so many athletes decide add a strong moral dimension to their writing – telling the reader how life itself should be lived – mystifies me in even deeper ways. (Although here, at least, Tracy Austin escapes blame — she can’t yak about any subject other than the brutally mundane details of her own life.) What have these people done that has qualified them to stand behind a pulpit, to preach their own system of morals and values? The possessors of truly good lives in professional sports may be a very, very different group of people than the wildly successful people in professional sports. The wildly successful ones, of course, are the only ones able to secure book deals.

And so here it is: the sub-sub-genre of Self-Help Books by Professional Athletes. I must confess that, even as your dedicated reviewer, I skimmed through some serious portions of some of these books, eager to just reach the back cover already. I feel that I learned more, by example, about narcissism and other breeds of self-focused neurosis than I actually learned about improving my life.

Each of the athletes I’ve reviewed live daily lives of dedication, focus, and sacrifice that I, as a civilian, can hardly comprehend. Although the ultimate goal of their lives’ work may seem silly – winning games – I think it is worthwhile to admire them for their example of pursuing, wholeheartedly, total expertise in one fascinating corner of the world. These people, however, are not authors, a fact that no amount of ghostwriting seems to be able to change, an apparent truism that has yet to deter professional athletes from constantly trying to write books. It was a lot easier to admire them before I cracked the spine open and started to read.

McSweeney’s is now a nonprofit and we would greatly appreciate your help. Click the button to donate. Thank you!