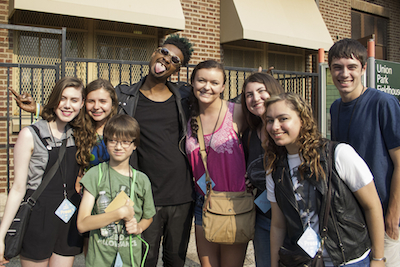 Our crack team of aspiring high school-aged music journalists—for this interview, that included Cristina Cass, Tricia Crimmins, David Kennedy, Kalina Gac, Caley Griebenow, Lucie McKnight and Eli Tecktiel—met with Detroit rapper Danny Brown backstage right before he lit up the stage on Saturday night. These creative writing students channeled their musical knowledge and interviewing skills during the following on-the-spot Q&A with the gritty and gregarious MC, who unleashed a few deep, cackling laughs during the exchange.

DANNY BROWN: What would I put in my Ben & Jerry’s flavor? Damn that’s kinda tight? I guess it would be vanilla and kiwi.

BROWN: I don’t know, I just like kiwi, and it’s like, I don’t find it that much, you know? I have a Filipina grandma and she liked kiwi a lot so I got it from her.

826 CHICAGO: What would you name the flavor then?

BROWN: I guess I would put a little caramel in there too, though, because I like caramel… but I don’t know, that’s a good question. I guess it would be “The Hybrid.”

826 CHICAGO: If you could make a collaboration song with any rapper living or dead, who would it be?

BROWN: I guess I would pick a dead one since that would be cooler. Mac Dre from Oakland, I like him a lot.

826 CHICAGO: I read that you grew up in Detroit, what do you think about Detroit? Does it influence your music?

BROWN: The fact was there was nothing to do in Detroit, so I had no choice but to stay inside. It was better to just stay out of trouble and stay inside and make music. It was something to do for fun, it was a hobby and now I get paid to do my hobby. That’s the American dream, right?

826 CHICAGO: Who was your favorite artist when you were first making music?

BROWN: First it was Nas. I always wanted to rap like Nas. As I got older, it changed as it started being about songwriting.

826 CHICAGO: What do you demand backstage before a show?

BROWN: I like sparkling water, like Perrier. I like to keep a lot of fruit because I don’t eat that much fruit like I’m supposed to, so I figure if I have fruit backstage and I get hungry and there’s nothing else to eat, it’s good to force myself to be healthy. Celery, almonds, and stuff that’ll kill you, like cigarettes and liquor, but we’ll keep that out. But for the most part fruit, celery, almonds, Perrier.

826 CHICAGO: If you could travel back in time to meet your 18-year-old self, what would you tell him?

826 CHICAGO: Who do you make music for, yourself or your fans?

BROWN: Myself at first, but then I started making money off it, so at the end of the day then I guess it’s a little bit of both, you know? I make music for myself but I make it for people to enjoy it because if it was just for me, it would be some depressing-type stuff.

826 CHICAGO: Do you have any crazy fan stories?

BROWN: I guess not too much, because I don’t party or hang out that much. I usually go and do shows and go back to my hotel room and play videogames. So I guess the craziest stories are people just stalking outside my hotel room. I might go out to smoke a cigarette and have people bum rushing me for pictures but that pretty much it. But that’s cool, it comes with the territory.

826 CHICAGO: Do you like playing inside or outside better?

BROWN: Inside. Because if it rains then what? I’ve played in the rain a lot and I don’t like playing in the rain, so I’d rather play indoors.

826 CHICAGO: Your songs often have a narrative, how much of that is autobiographical?

BROWN: I’d say 75%. Sometimes I exaggerate stuff for entertainment purposes because I like to make people laugh, but for the most part 75%.

BROWN: Writing because it’s the beginning stages. I’ll write a song and I’ll sing it to myself for a year and think they’ll go crazy for this! Then two years later, I’ll perform it for the crowd and they go crazy and I think, I was right! It’s like a fulfilling feeling, a weird feeling but it’s tight.

826 CHICAGO: Do you have a favorite venue?

BROWN: I like playing in London, I love it out there, the fans are more there for the music. In America a lot of the time you’ll do stuff because its cool. You’ll come because your friends are there, maybe some girl’s there, but overseas in London, they only go for the music and I like that

826 CHICAGO: If you were deserted on an island, what three things would you want?

BROWN: Water, Wi-Fi, and a laptop, and I’m gonna get an Uber to come pick me up! Uber a boat to me, you know?

826 CHICAGO: What’s the coolest thing you’ve ever seen at a live show?

BROWN: I’ve been to a lot of live shows man. I guess the coolest thing would be the chance to open up for Eminem and being around Eminem. I grew up in Detroit, so I looked up to him a lot. Being able to see him was a big deal to me.