Derrick Rose’s ACL and the Deficit: How a Torn Ligament Impacts the Federal Budget 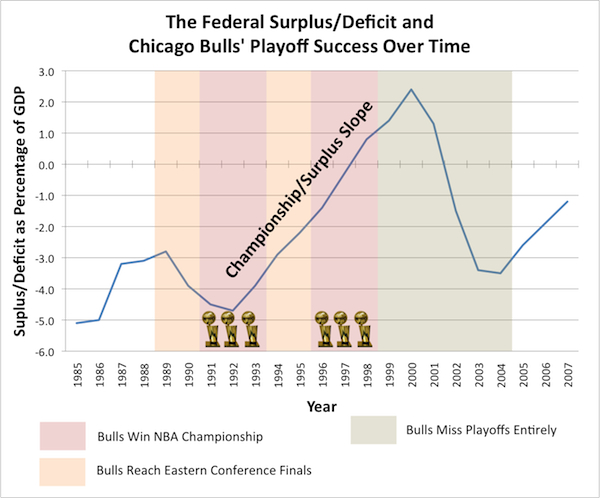 As Derrick Rose’s ACL tore asunder, instantly ending his 2012 N.B.A. playoff campaign, Bulls fans and deficit hawks alike fell into deep mourning over the lost opportunity to: 1) win an N.B.A. championship and 2) balance the federal budget. The crushing gravity of the moment was illustrated by Rose’s pained grimace as he writhed on the floor clutching the only left knee on the planet capable of bringing another Larry O’Brien Championship Trophy to Chicago while simultaneously bringing down the cost of America’s federal expenses.

Before that dark Saturday, both the N.B.A. Finals and the United States’ sizeable public debt had been an intense part of the national discussion. The usual arguments were rehashed: can the Bulls get past LeBron James and the Heat? What is a bigger strain on the budget, entitlements or regressive tax cuts? Though the former question would be answered over the course of the playoffs, the latter doesn’t have the benefit of such a concrete conclusion. And because of the fractured nature of American politics, the discussion continues to be debated along party lines: for Republicans, entitlements are the chief contributor to the deficit; for Democrats, it’s low-taxes for the wealthy and high defense-related spending that’s the problem. While these arguments are valid to a small degree, both sides have missed the key factor as to why the federal budget is so hard to balance: the Chicago Bulls haven’t won an N.B.A. championship in a while.

Since World War II, the United States has undergone only one sustained, multi-year climb from deficit to surplus. This period occurred during the 1990s when the American G.D.P. increased for nearly ten years straight. What do we have to thank for this prolonged period of budgetary sanity? Or, more accurately, who do we have to thank? His name is Michael Jeffrey Jordan.

Just before the1990s, the economy was sputtering along between recessions, and the Chicago Bulls were unable to advance past the Detroit Pistons in the N.B.A. playoffs. Despite Jordan winning the Most Valuable Player award in 1988, the Bulls were unable to push their way out of the conference semifinals. These early exits from the playoffs had no positive impact on the budget, and annual federal deficits hovered around 3% of the U.S. G.D.P.

But Jordan was just getting started.

In 1989, the Bulls finally reached the Eastern Conference Finals. The deficit, though still increasing, reached an inflection point. By 1991, the Bulls were N.B.A. champions and the federal budget had begun its rapid ascent out of the red and into the black. By 1998, the Bulls had won their sixth championship, and the United States was running a surplus of 1.4% of the U.S. G.D.P., the largest in over forty years. Many economists credit then Chairman of the Federal Reserve Alan Greenspan for the boom, but remind me again how many times he was named N.B.A. Finals M.V.P.? Because Jordan was N.B.A. Finals M.V.P. six times.

Unfortunately, not even Michael Jordan could influence the budget in perpetuity. After M.J. retired for the second time in 1999, the Bulls began their arduous rebuilding phase, and the federal surplus gave way to deficit once more. Some blame recession and war for the budget imbalance during this period, but that argument disregards the overwhelming fact that the Bulls missed six straight playoffs between 1999 and 2004. No budget can survive that level of disappointment. The Bulls’ middling performance between 2005 and 2007 did nothing to improve the situation.

And then, like manna from heaven, the Chicago Bulls drafted Derrick Martell Rose.

Last year, Rose won the regular season M.V.P. and led the Bulls to the Eastern Conference Finals where they lost to the Miami Heat. In a more stable economy, this level of success might have been enough to meaningfully impact the budget. But you’d be hard-pressed to call this a stable economy. Truth is, the only thing that can get the federal budget back on track is a Chicago Bulls championship.

Before that awful Game 1 disaster, a Bulls championship in 2012 seemed attainable. While Rose’s anterior cruciate ligament functioned properly, the Las Vegas odds were only around 4/1 against the Bulls winning it all. But after the injury? The odds shot up to 12/1 against. What chance does that leave for the U.S. budget to approach something near sustainable? Not good.

So forget 2012. With Rose out, Bulls fans and deficit hawks will be best served by Rip Van Winkling it and waking up around December when Derrick will likely be playing basketball again. The truly optimistic among us will still hold out hope. After all, backup C.J. Watson has had a good year. Third stringer John Lucas III played a number of highlight games as well. But can these two men finish what Rose started by bringing a championship back to Chicago and a federal surplus back to America?

For the sake of our nation’s long-term financial outlook, I sure hope so.