Did you know Luther Vandross’s middle name was Ronzoni? I didn’t. His mother was apparently a big Ronzoni pasta eater during the pregnancy. She put the name in the middle of Luther’s when he was born.

I had just arrived to the Smithsonian for a research fellowship, rolling into town shortly after Ben Stiller had plugged his movie Night at the Museum: Battle of the Smithsonian. The day before, R, an archivist in the museum’s behind-the-scene archives center, gave a seminar talk to his colleagues about “Luther Vandross and the American Song Book.” He began his talk with the middle name trivia question. You learn so much at museums. I’m ready if E! True Hollywood Story calls me for a consult.

They have nineteen museums at the Smithsonian. Another new fact for me. Several of them have landscape images from the 1800s, which is why I’m here. A month ago in my sustainable agriculture and environmental history class, I got absorbed with the French artist Millet’s The Gleaners, an 1857 portrait of three peasant women picking up the leftover wheat in an already harvested field, gleaning, that is. I thought Millet’s portrait was, to use official art-speak, pretty nice looking. An image of the land from the 1800s, but a working landscape, not the more common and still stunning wilderness mountainscapes one can find with a Hudson River School google. Is nature where we live and work or where we don’t? French art society did not take well to Millet’s image − putting peasants in the foreground smacked a little too much of praise for the lower class, too close to that Socialist rabble afoot. People working in nature diminish it, they seemed to suggest, so let’s understand: there are those who are supposed to be there and those who are not.

Many of the museums are properly placed around the National Mall. The Museum of American History − my home base − finds the Washington Monument west, to its right, the Capitol over there to the left. Walking to my office from the Metro stop that pops up right there in the middle of the Mall, two women were explaining to their what-sounded-like Greek mother that the grass wasn’t always so haggard but that the Park Service was still recovering from those tens of thousands that trampled it down watching Obama’s Inaugural speech. That doesn’t sound quite right to me, I remember it always being haggard from prior visits, but I’m new so I just walk past trying to act like a local who’s supposed to be here.

The Air and Space Museum is across the Mall, and the Natural History Museum, where the dinosaurs are, is next door to the left. Those are the two I remember actually enjoying from childhood visits on 100+ -degree days with my parents. They only brought my pig-tailed sister and me here when it was intolerably hot, as I recall, teasing us with quick peeks at dinosaurs and rockets, before carting us off to art museums. I take it my parents thought nine-year-olds preferred to look slowly and longingly at art with lilted gazes, rather than T-Rex’s or Apollo lunar modules. I think of this because I’m heading up to the American Art Gallery next week to check out those old landscapes. I don’t want to tell my parents because they’ll think they were right to take us there a quarter century ago. In July. When it was 104-degrees. And, oh, the ice cream line was “just too long, honey.”

Meanwhile, I’m hanging out backstage with archivists and curators, looking at ads and pamphlets and labels about food and fields from the 1800s − these too have images showing different kinds of working landscapes. Getting to the Archive Center has me wading through “tourists” out there with guidebooks and cameras and strollers and grandparents. By my estimate, though, the great majority appear to be hordes and hordes of squirrelly, untrustworthy middle-school kids in batches of identical T-shirts (easily identifiable by teachers and chaperones, I take it). “Revere Junior High − Go Riders!” “Middle Plains Middle School − Freedom Isn’t Free!” Tourists. Are they supposed to be here or not? I learn that the ever-surly archivists don’t think so − you’re either an insider, in the know, or you’re passing through, gawking with no concern for proper protocols of place and unaware that you shouldn’t impede us locals.

After a time of looking at those old ads and labels I come across, what’s this?, a thick folder in a large box with “Ronzoni” penciled on it. It catches my attention only for Luther Vandross’s sake. Serendipitous? I pick it up and show R, who smiles and gives a light chuckle. “Oh, right right…” he says. They’re pasta box labels from the 1910s, preserved remarkably well. I find a crisp, brightly colored one with a sharp red border, fine yellow and blue lettering in a stately font − “Macaroni” from Ronzoni − placed atop the label’s central and well-rendered image, a golden hued harvested field.

Poor Luther Vandross, who died at 54 in 2005. Did you know he worked with Manilow, Streisand, Bacharach? Bette Midler? He did.

The Macaroni label is sitting there as I very importantly pound out notes on my laptop. Then I pause and look closer, double-check, peer in, and allow that first dawn of awareness to wash over my face as I recognize the image. It’s The Gleaners, reproduced right there for the sale of Macaroni, the poor immigrant’s pasta. 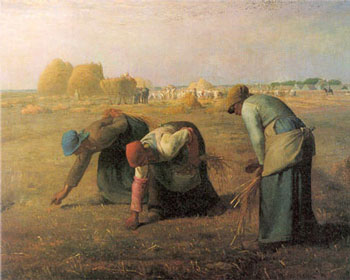