It would make little sense to add Part Five to a three-year-old four-part series except that it took me three years to find the thing I’m talking about here in Part Five.

As it were, in 2009, on the door of a fifth-floor office in the Smithsonian’s National Museum of American History was a cartoon. A near-120-year-old political cartoon. It showed a three-headed hydra, a snake, charging a farmer back on his heels who tries to fend it off with a bayoneted rifle, the thick multi-headed snake egged on by a bunch of Robber Baron-looking industrialists. One neck says oleomargarine, one says cotton-seed-oil, one says glucose. Those were three controversial new manufactured foods in the nineteenth century. They were substitutes or contaminants; the cartoon’s artist August Berghaus fashioned them as adulterants, as cheats. The trunk of the hydra says “Fraud.” It’s right there. Underneath the image it said “from 1890.” There was nothing all too remarkable in this. I asked to make a copy and then went and made a copy. Then I had the copy in my files. 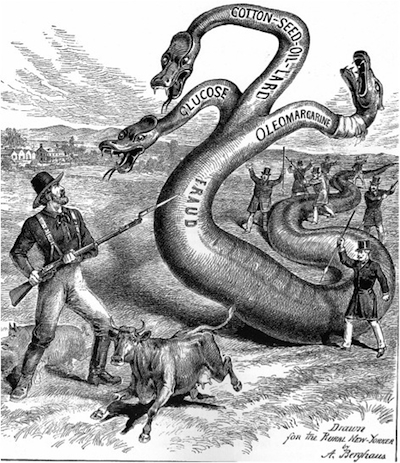 In a book about food adulteration, still in the works—because yes, it takes forever and a year to write one of these things, these histories, especially when you move from one job to another, which is one life to another, and all the while teach and grade and in parallel make a home and try to sell the old house (also still incomplete) and go to soccer and karate practices and pick up the Indian take-out and what not—in that book, this cartoon was becoming more and more interesting.

After the Smithsonian stint, I wanted to find the original. Then I could see what it was like as published. I could figure out if there was interesting text around it, if it was prominent or buried, if it was large or small. And so on.

This didn’t have to be a big deal.

So I’m looking for the Rural New-Yorker, 1890. But if you, like me, try to find it in the Library of Congress or WorldCat, you find a bunch of Rural New-Yorkers, many of them changing names over the years. And since you, like me, can’t go to every library that has every version of what could be the paper you want, you just don’t do that. You don’t. This realization accounted for a number of half-hearted search attempts for a good two years.

Along the way, I found other details in a book from a stamp collector who collected not postage stamps, no, that’s too quirky. This guy collected margarine tax stamps. They used to tax margarine (fake) to keep the price in league with butter (real). Oleomargarine—it’s original official name, just ask your Midwestern grandparents—was one of the adulterants I’ve been studying. That meant I had two reasons to like Mr. Stamps: for his margarine info and as a cartoon source. His book confirmed it was “1890.” Then I need only find some place that had that volume.

The Wisconsin Historical Society had it. Of course they would, ever the dairy state, those staunch butter defenders. Their catalog listing had the specific image too, also noting “from 1890.” But I wasn’t going to Wisconsin just for that. Nice try, Cheeseheads.

Luckily, my move from one state to another (you’ve seen this story before) put me only an hour-ish from Manhattan and the New York Public Library. They had several things called the Rural New-Yorker. One of them, by the dates, looked about right. The catalog said it was formerly Moore’s Rural New Yorker, it acted like the hyphen didn’t matter, it said it merged with American Agriculturalist, it said there were scattered holdings of scattered volumes, short on full runs of many years, but it all seemed promising.

The NYPL doesn’t keep this stuff right there at 42nd St. They say call ahead, it’s off-site. I call ahead. They say do it electronically. I put in a request ahead of time. They say give them a week. I give them two.

I plan my Fall Break for a number of things at the library and tack this venture to the end. I get there, do the other work, and then, time’s up, they haven’t delivered the Rural New-Yorker. I had to leave.

Back home, an automated email tells me it arrived that very afternoon, after I’d left. No need to draw this out, I resolved to go back the next week and take a picture of the page and be done with it. I would.

Except I couldn’t go back the next week.

So. I made a back-up plan, calling a friend, J—, in the city who, she said, could indeed go to 42nd St. on my behalf. I forwarded her my automated NYPL confirmation note, gave her my temporary library card number, bored her with the reasons why I wanted it (see above), and sat back to wait from afar.

J— wrote the next week. Bad news followed by not good news. She went to the Library, but they were reluctant to hand over the volume. She pleaded and cajoled and still they resisted; she showed them the request details again; she avoided my suggestion to play the cleavage card; and then, eventually, eventually they relented.

An old Scottish librarian carried the book for her, I’m told, instructing her to handle the pages with care. She leafed through those pages, with debris, torn little corners, and book dust of a century and a quarter falling all over the table and on her feet.

“But,” she tells me, disappointment dripping from her Calibri-fonted note, “I’m so sorry, there was no three-headed hydra. It wasn’t there.”

Did this mean I had the wrong year or did it mean the NYPL’s incomplete Volume just happened to be missing that specific page?

Newly re-motivated to wind up this hunt, I went back to WorldCat and Google and the LOC to re-search and re-try hyphenations with and without and, oh hell, it dawned on me, there it was again, I finally realized Penn State had copies of the Rural New-Yorker too, which I’d known before but never cared about. Except now here I was in Pennsylvania. The Self-Same State.

I submitted a request through interlibrary loan. The librarian replied to say Penn State asked, “Is it okay if we send the hardbound volumes?” I’m almost certain you’re not supposed to send 120-year-old archival holdings through the mail. That Scottish librarian sure as hell wouldn’t. But I’m not here to judge.

I kept googling the image info, though why, why? Like there were others looking for the original and they posted the results on-line, just to prove they beat me to it?

But it’s crazy how much we google over and over again, isn’t it? It got me back to the Wisconsin Historical Society where, screw it, I wrote them an email laying out my case, that they claimed to have the image, that it was in their records as a stand alone item, that they also had bound volumes of the original, according to their catalog, and that something was wrong, that I didn’t think it was 1890 after all.

I was impatient. Two days later I called the WHS straight up, to which they said, “Are you the guy that emailed?” Yes. “We’re getting to that, it’s on our list.” I elaborated my case. They said, “We get it,” and I hear some quick click clack tapping and they acknowledge their source for the 1890 attribution was from the stamp collector I’d found. But they’ll “investigate further.”

Alas, I’ve got emails out, phone calls under my belt, a friend hunkered over deteriorating volumes on 42nd Street with a craggy Scotsman, an interlibrary loan librarian working the case, hardbound volumes (probably inappropriately) sent my way, calls on hold, return queries to that first cartoon-posting Smithsonian historian, and still no three-headed hydra.

I’m trying to make myself feel better, like you do when you realize you’re spending way too much time on something largely inconsequential, but you’ve dug this deep and why back out now even if nobody would ever know if you found the original because who else in the entire world could possibly care? Fellini comes to mind, that line in 8 ½ where he lays it all out, “I thought I had something simple to say…” and this is supposed to make me feel better, as if it’s a noble cause, as if I shouldn’t be yet more embarrassed for thinking Fellini is someone to quote in the same paragraph as the failing quest for a sketchy political cartoon. Why not call me Ishmael? Or no, it’s windmills, I’m tilting at windmills.

And then, finally, a note appears at the top of the inbox. This one from the WHS’s Assistant Reference Archivist. John. He tells me this, god bless him: “I found it.” He had to leave his desk, his floor, his building, walk across the WHS’s grounds to another building (he told me), dig elbow-deep into their stacks, pull out several volumes, thunk them down on big tables, flip through page by page (I’m guessing), until, there it was, there it was.

I asked my librarian to fast-track Penn State’s 1887 volume 46, which she did, and which put the actual original on my desk within the week. In that intervening time I’d replied to Assistant Reference Archivist John to tell him that while I don’t use the word hero very often, he, my virtual Dairy Heritage friend, was a True American Hero.

He replied to say that if it helped round out his character, it was raining pretty hard when he trekked over to the other library.

I started to bend between matters epic and ordinary, on how, for my own sake, I had to build this triviality into something grand so I wasn’t sullen for having spent such mental energy considering this a problem. Then I accepted that when these are your problems, the provenance of three-headed hydra cartoons, life is pretty good. Then I accepted that three years go by, (now don’t they?), where soccer and teaching and karate fill the space that fork-tongued serpents shouldn’t.

Then I figured, well, end of story.