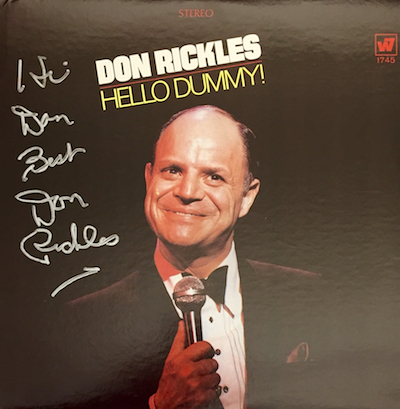 Comedy is sometimes perceived as an aggressive art form. A full-contact sport. One might therefore assume that the alpha-practitioners of the craft are mean-spirited, take-no-prisoners motherfuckers. But in my experience, comedians are most often deeply soulful individuals who are skilled at cutting without drawing blood. Or at least without leaving a permanent scar. And that, in a nutshell, is why I believe Don Rickles is so beloved. We the audience can see through to his true self. The story of how I got Rickles’ classic comedy album Hello Dummy signed is one of my favorites. Mostly because it is a tale of tremendous kindness. (Spoiler alert: if you are the kind of person who insists on believing that big-time wrestling is real and don’t want your illusions shattered, stop reading now.)

I formed my opinion of Don Rickles before I really knew his comic persona. You see, over the years as a kid in Los Angeles, I attended school with the children of many celebrities. It’s one of the unique aspects of growing up in an industry town that just always seemed normal to me. So when I saw those famous people at school plays, swim meets and holiday concerts, they were out of costume and context. Carol Burnett and Joan Rivers were moms like my mom. Bob Newhart and Don Rickles were dads like my dad. But shortly after my time in elementary school with Don’s daughter Mindy, I attended a benefit in Las Vegas with my parents where he performed. He was fierce and ferocious and brutally funny. After the show, I went up to say hello and immediately the façade of the man onstage dropped, and he transformed back into the smiling, genuine, effusive guy I knew. He embraced me and excitedly called over his wife. “Barbara, look! It’s skinny Danny!” Mr. Warmth indeed.

But this story isn’t about Don Rickles. It’s actually about Jimmy Kimmel. Like Rickles, Kimmel is known for his quick, biting wit. Whether it’s as Ben Stein’s caustic sidekick or as the co-host and co-creator of that typhoon of testosterone The Man Show or, most prominently, as the host of Jimmy Kimmel Live on ABC for over a decade, Jimmy often dares the audience to laugh at his delightful deviousness. He is a master prankster who loves to torment friends and family alike. Sometimes on his show, sometimes just for fun. His YouTube challenge to parents across America wherein he elicits videos from viewers telling their children that they’ve eaten all of their Halloween candy has become a wonderfully sadistic annual tradition. Yet somehow, Jimmy manages to glide along the edge without crossing over into actual cruelty. And I think it has to do with the fact that we can tell, at his core, he’s a good guy.

Jimmy and I have been friends for 20 years. I first met Jimmy when he was a local radio personality in LA and I was in my very first TV development job. He was doing a promotional appearance for his radio station at the Macy’s store in the Beverly Center where my mom worked. As luck would have it, I was visiting my mom that day and she asked if I had ever heard of “Jimmy the Sports Guy” from KROQ. I told her that I listened to him on the Kevin and Bean morning show all the time and thought he was hilarious. With that, she took me over and introduced me.

Right away, Jimmy and I hit it off. We went to lunch and Jimmy told me that he really wanted to get into TV. I promised him that the very next project I could hire him for, I would. Within weeks, I brought Jimmy onto something I had in development and although that show didn’t go anywhere, it did lead to him getting hired for Win Ben Stein’s Money. And through the years, we’ve remained great friends.

Jimmy is not only the hardest working person I know, he’s also one of the most generous. Our birthdays are only six days apart and for many years we would celebrate together, invariably with him insisting on picking up the check. And it’s not just me. He’s like that with everyone in his immediate sphere. As a result, I am always a little self-conscious about asking him for anything. But after I moved away from LA, I did ask him if he wouldn’t mind doing me one specific favor. Don Rickles was becoming a fairly frequent guest on JKL and it was clear that there was real affectionate relationship developing between them. Jimmy reveled in having Don hurl invective at him, laughing deeply and appreciatively at every scowl and insult. I mentioned to Jimmy that I had never gotten Rickles to sign my copy of Hello Dummy. Without hesitation, Jimmy said he’d take care of it and I shipped the LP to him. A few days before Don was scheduled to make his next appearance on the show, I fired off an email reminder to Jimmy. He quickly replied that he was on it. No problem. That he was happy to do it. Consider it done.

On the occasion of my next trip out to LA, I stopped by to see Jimmy in his office at the El Capitan Theater. As soon I walked in, he proudly handed me the signed LP. Then, a few minutes later, Jimmy’s assistant pulled me aside and said, “Don’t tell Jimmy I told you, but he actually lost your album.” I didn’t understand. I was holding my album. Then his assistant explained. When Jimmy realized he lost it, he didn’t want to disappoint me, so he went online, found another pristine copy and had it shipped priority to his office in time to have it for Don to sign for me. I never told Jimmy that I found out what he did for me. But I’m guessing now that I’ve written this, word will get back to him. Sorry Jimmy, but you’re busted.