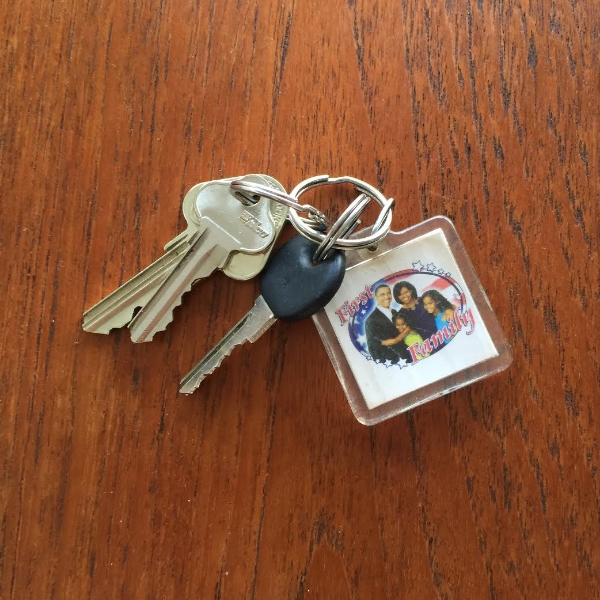 The 2008 Democratic primaries were a huge talking point for me and my friends in Sydney, Australia. The prospect of America having its first African-American or female president was truly exciting. At the time, we were young and pushing boundaries, exploring feminism, politics, and art. We felt like something was going to change both in Australia and in America, and that we were at the vanguard.

Soon after that, one of my friends went over to the States for a three-month law internship in Texas. She brought back a key ring with a medallion featuring a portrait of the Obama family. It was fun, mainly because we don’t get the same theatrics with our political campaigns in Australia. You would never see our upcoming Prime Minister’s family on a key ring. It epitomized the contradictions in American culture that we Australians find so fascinating, and was a good symbol of that exciting time.

About three years later, I thought I had lost my keys. After going key-less for four days and just about giving up hope, I found them in the pocket of a jacket. I was jumping up and down and tried to explain to my boyfriend that I didn’t care that much about the keys themselves but was so glad that I had my “First Family” back. He didn’t get it; we didn’t last very long as a couple.

I’m no longer in contact with my friend who gave me the key ring, and the “hope” that Obama ushered in has now subsided, but I’ve kept the Obama family on my key ring. Sometimes I take a longer glance at the portrait and think, “What a peculiar thing to have.” But most of the time I just look at it like it’s become part of my body. Like staring down at your feet.