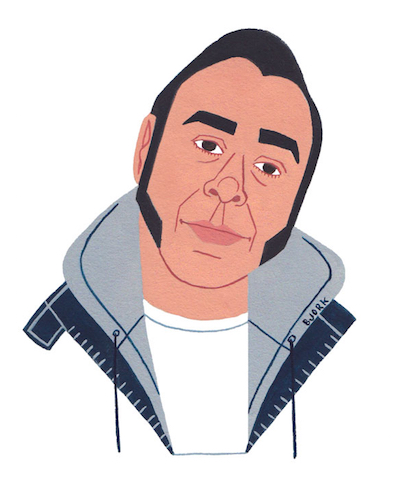 Greg’s on his way to my apartment. We’re going to talk about the time he got shot and nearly bled to death in an alleyway. I’m so nervous about doing this interview, I feel pukey. The role demands many tricky balances. For instance, I don’t want to be too somber, because I’ll seem pretentious. Yet I don’t want to seem too casual, because I’ll look like an asshole. I want to get lots of facts, but I don’t want to come off as clinical. I want to connect with him, yet I don’t want to act like I can fully understand what he went through. I want him to be comfortable, but I don’t want to try so hard to make him comfortable that I’m straining. There’s plenty of other stuff, and I know I’m overthinking it, but I can’t stop. I try being still for a while, taking deep breaths, and thinking mystical thoughts. It’s not working, so I spring up and zip-zap around, all jagged and electrical. I head to the bathroom and pee. I don’t really need to, but it gives me an immediate, goal-driven activity I can easily accomplish, so this helps.

Greg arrives. We hug in my doorway, and I chill right out like I always do whenever whatever The Giant Impossible Thing finally starts happening. Greg’s wearing a plain black-t-shirt and a plain black hoodie and plain dark jeans. His hair is slicked into a semi-pompadour, giving him a retro look. He’s 6’3” and 250 pounds, an even blend of height and brawn and puppy fat. Greg’s build reminds me of the guys I grew up with in the Midwest — the farm boys who’d get up at 5:00 to do chores before school, then show up to football practice wearing steel-toe boots because it was the only pair of shoes they owned.

Greg has never been a cowhand, as it turns out. It’s not a common gig for people in the Seattle area. I forget that sometimes. I bring him a glass of water, and we shoot the shit a little. I really like him. He’s been over here before. My apartment is small, but it’s quiet and clean. We sit at the kitchen table, which is green. So is the couch, the cupboard, the lamp, the shelf, the chair. Everything is a shade of green.

I’m set up already, so we start in. I ask him about his job at the Twilight Exit. When he began, Greg was in his late 20s. “I’d just gotten out of construction. I was tired of it,” he said. The official title was “Door Guy/ID-Checker,” but he was expected to bus tables as well. The position didn’t require a ton of combat training. “It’s not like Vegas, where you’re hired muscle. If somebody got out of control I was supposed to do everything I could to get them out peacefully, and if they refused, it’d be in police’s hands from there,” he said.

On the night of the shooting, Greg had been working there almost a year. The other bouncer Joe was scheduled, but he had a date, so he asked Greg to fill in. Greg didn’t mind picking up the shift. I’d come to the bar early to meet a girlfriend, and I wanted to get us good seats. Greg probably checked my license, though I don’t remember it. Back then, he was still a stranger to me.

Greg remembers Whitney’s arrival. So do I. When she came inside, “she barged in and ran straight into the bathroom. That’s generally irritating if you’re the door guy because you don’t want random people dashing in. There was also something about the way she was carrying herself that was off-putting. It was weird. She seemed really pissed off,” he says.

Whitney sat near me at the horseshoe bar, and I had a clear diagonal view of her. She got a pint of beer and talked quietly on a cellphone. James arrived shortly after to confront her. He got right in her face and was saying, “You left the door unlocked. They took all my stuff. They broke my TV.” Whitney never got off the phone. She didn’t acknowledge him. She wouldn’t look at him.

“James blew into the place like a storm,” said Greg. “He was screaming and acting all tough. But he didn’t put up a fight when I stepped between him and his girlfriend. Our chests were touching or whatever, but he never got violent with me. I didn’t have to pull him off her. I didn’t see him touch her. I led him pretty easily to the door. I went after him outside because I wanted to talk, but he took off right away.”

“I was trying to figure out what was going on,” said Greg. He approached Whitney for answers, but “all she said was, ‘I don’t know him. He’s just a crazy person.’ I’d seen her with him before, so I knew she was lying. I asked her to call a taxi. I wanted to kick her out, but at the time it made more sense to get him out now, and she could leave after, so she wasn’t in danger.”

“Do you think you should’ve handled things differently?” I ask.

“Not really,” said Greg. “Any security guy who’s worth half a damn is going consider these factors when dealing with a domestic violence case. You don’t want to throw a woman to the wolves. Though now it’s definitely our policy that when people are fighting, it doesn’t matter who they are or what happened. You need to get everybody out, regardless of gender.”

The conflict was bizarre, but it was over fast and not particularly alarming. Fifteen, maybe twenty minutes went by. Karaoke was beginning, and customers were arriving steadily. Greg checked IDs and picked his song for later, Queen’s “Crazy Little Thing Called Love.”

Greg went outside to have a cigarette and stood before the main entrance, which is in the alleyway. “I saw James come around the corner,” said Greg. “I thought he was just coming back to be an asshole and puff up. I started saying ‘You know you can’t come in tonight,’ but before I could finish, he pulled a gun out of his waistband, cocked the hammer, pointed it at my face, and told me to get the fuck out of his way.” 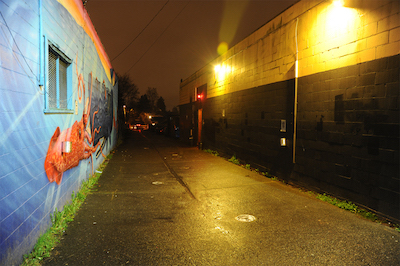