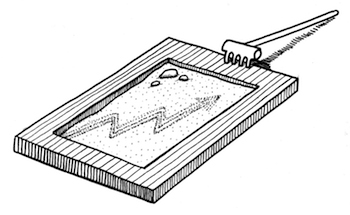 It’s that time again: my annual CEO newsletter. It’s been an incredible twelve months for Grosberg. As you know, a year ago we were on the mat: sales down across the board, costs rising, imminent lay-offs. But that’s all over now. Today I write to thank you for a year of your hard work, and to tell you that the real force behind our turnaround has been the miniature Zen rock garden I keep on my desk.

Last Christmas my Secret Santa must have purchased my gift from the Sharper Image catalog in a moment of purest inspiration. For when I first tore open my little bag of sand and poured it into my shallow plastic tray and placed the first of my little plastic pebbles I began to understand what centuries of Buddhist monks and Samurai lords had felt. I began to find in my heart the strength to guide Grosberg back to strength, and victory.

From the little booklet that came in the box, I learned about karesansui, the noble and ancient Japanese practice of positioning pebbles, rocks, sand, moss, and grasses in symbolic arrangements of natural formations, particularly mountains and oceans, typically in the back garden of a temple or palace. Karesansui was once the purview of Japanese royalty. It has since become available to every business executive and general enthusiast of loose sand in the workplace—in my opinion, it is perhaps the greatest gift of American-Japanese cultural exchange, and not solely because sushi is fundamentally uncivilized and disgusting.

Before I had karesansui in my life, I never knew how much I needed it. I’d emerge from a quarterly sales meeting ready to put my first through a wall. But I feel a deep power and tranquility with this tiny wooden rake in my hand, dragging the sand in concentric circles, rarely reversing direction—and only then for great symbolic effect.

Sometimes the stones represent the islands of Japan. Sometimes Shinto temples. Sometimes the strategic locations of distribution centers in the Mid-Atlantic. Sometimes, if I meditate deeply, a pebble appears to be a raft off the coast of Hokkaido. I see a vision—a huge tsunami approaches on the horizon. And then a great crane swoops down from the heavens, carrying the pebble to safety. In this vision the tsunami of course represents increased inventory costs, and the crane is Troy Anderson, a supply chain consultant who advises us on JIT inventory techniques.

Yes, we’ve faced trying times—that attempt at a leveraged buy-out by our biggest competitor, Nielson Tin and Pewter, or my accidental use of an oscillating desk fan, which sprayed the crests of my most serene creations down onto the low-pile carpeting. But like the great mountains of Nippon, we have managed to persist through the highest waves. Other executives occupy their hands and minds with miniature pool tables, Derek Jeter bobbleheads, those clacky perpetual motion balls set-ups. But their spirits will not be satisfied. At the end of a long day, they reach from their keyboards to push a red novelty promotional button from Staples. “That was easy,” the button says. But was it easy, in the end?

Achievements like our recent spike in production and sales will always elude those lonely men and women. Alone they face a typhoon of endless frustration punctuated only by insufficient desk novelty pleasures: the slight breeze of a tiny golf putt or the small empty swish of a tiny basketball hoop. But I cannot weep for them. I can only drag my rake all the more calmly toward the south, or the north. I may curve gently to the northwest—whichever way the wind of our triumph is blowing.

And so we look to the coming year, which will bring new challenges and perhaps a sixth pebble. Grosberg supply will be clever as a kitsune, wise as Omoikane, and strong as the great peak Fuji. All I wish for is peace and clarity, and perhaps one of those miniature bonsai trees. 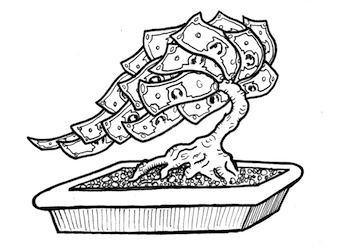