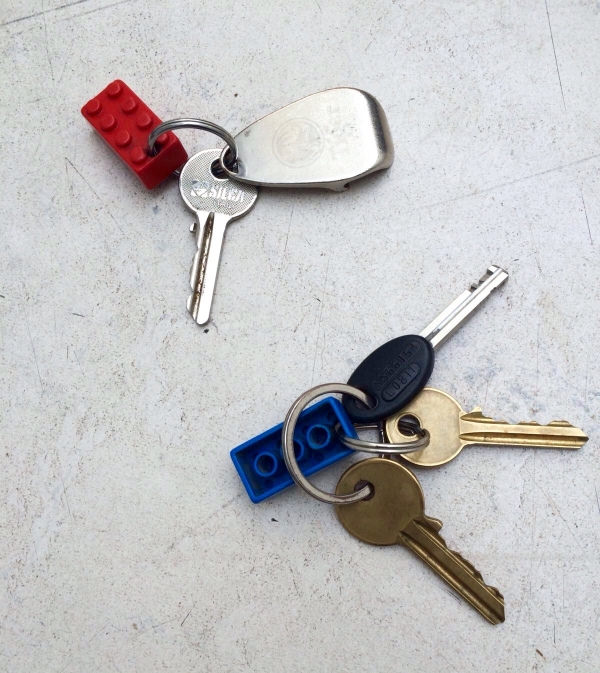 Soon after I finished at university, I left the city to take an engineering job and live alone in a small rural town. Around that time I purchased a medium-sized car. This had the advantage of getting me home on a Friday afternoon two hours earlier than the bus could, the disadvantage of adding some significant bulk to the already unwieldy tangle of keys I carried around in my jeans, and the unintended effect of forcing me to spend 10% of my weekend time alone on the road, reflecting on the disparity between how I had imagined my career would be and how it had turned out.

One Saturday I was back at my parents’ home in the city. I found my old bucket of Lego and chose two standard bricks — one red, one blue, both so perfect. Then, feeling exactly as I had always hoped my engineering job would make me feel, I used my father’s drill to make holes in them and put each one on a separate key ring.

I took my big tangle of keys out of my pocket and divided it in half: one set for the city, the other for the country. The Lego bricks served as brightly colored reminders that my life had effectively been split in two. It remained that way for a good two years, while I grew ever more disillusioned and eager to escape. But at least my keys were better organized.

I quit that job last year, sold the car, and left to go traveling. Now I’m on the other side of the world, learning Spanish, growing a beard, and hiking up volcanoes. Both sets of keys now sit on the bookshelf in the bedroom where I grew up (my mother photographed them for this essay), and a series of hotel room key cards and hostel dorm room locker keys have taken their place in my jeans pocket.

Did my small, spontaneous act of Lego creativity lead directly to the position in which I now find myself, unemployed and delighted with life? Maybe that’s a stretch of the imagination. But isn’t that what Lego is for stretching one’s imagination?