Miami’s Preeminent Cheerleader Magnet:
A Review of Next Question by Drew Rosenhaus 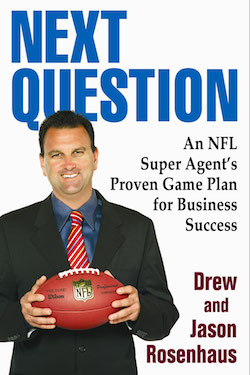 So, even though his book is getting reviewed in this space, Drew Rosenhaus isn’t actually an athlete. Instead, he is history’s most powerful and luxuriously bankrolled NFL agent.

See, right there, with the words “NFL agent,” you thought about Jerry Maguire Tom Cruise’s cornball ‘90s movie wherein he achieves karma-derived success by being a tender sweetheart towards both his underdog client and the fairer sex.

One must abandon all that bullshit schlock when entering the seedy world of Drew Rosenhaus. Banish that gooey sentiment out the back of your mind, because Next Question deliriously revels in every testosterone-y, hair-gelled Miami bro cliché you’ve ever encountered on television. For starters: Drew’s spiritual guiding light is a karate teacher named Young Soo Do, who mostly teaches Drew to bust concrete slabs with his bare hands.

The following passage serves as a too-accurate representation of Next Question’s general tone:

To make a long story short, because I dated a [Miami] Dolphin cheerleader or two, the Dolphin cheerleader director instituted a rule that the cheerleaders could not date agents. Of course our names were not specifically cited in the rules, but what other agents were they going to date?

The “our” in that passage refers to both Drew and his younger brother/business associate/dutiful number cruncher, Jason. Jason would eventually marry Cassandra, a Dolphin cheerleader. (“I guess we can overlook a minor rule infraction here and there.”) A photo section in the center of the book shows Jason puffing his chest out in front of a ten-foot poster of Cassandra that had been glued to the front of American Airlines Arena, showing her rustling up some spirit for her new employer, the Miami Heat. The real Cassandra is nowhere in sight; Jason is content and proud to portray himself giving a teenager’s gleeful giggle over the sight of dem big boobies, beaming like a Safari hunter over the piece of tanned and bedazzled game he managed to bag. It’s all very gross.

The actual subtitle of Next Question is An NFL Super Agent’s Proven Game Plan for Business Success. A more accurate subtitle would be “An NFL Super Agent’s Astoundingly Detailed Recollections of Most of the Contract Negotiations He’s Participated In.” Aspirants hoping to glean practical pointers on how to not just survive, but thrive in the heated crucible of a negotiation in which tens of millions of dollars are on the table will be supremely underwhelmed. The frequently cited “Next Question” method of deal-making refers to a soap-operatic press conference Drew delivered—in the front lawn of his client Terrell Owens’ house, a player whose megalomania dwarfed even his Hall of Fame talent—in which his answer to each new pointed query from the assembled media was a terse, “Next question.” I don’t know what the lesson here is even supposed to be (being rude is often helpful in the business world?), and Drew doesn’t really bother totally explaining it, in favor of delivering about 40 brutally slow pages that detail each new correspondence in negotiating Owens’ next contract.

In the years since its 2008 publication, the Next Question ethos has been directly and publically undermined by… well, by Drew Rosenhaus. In 2011 Rosenhaus gave an interview on Dan LeBatard is Highly Questionable, ESPN’s lighthearted daytime talk show that features sportswriter LeBatard gabbing alongside his gentle-souled retiree dad on a set designed to look like a chintzy kitchen. The interview ultimately ended up in a detailed discussion about Rosenhaus’ first breakup, endured at age 13 (the LeBatards have no agenda save fun). More importantly, the interview began, rather confusingly, like this:

LeBatard: What would you go back and do over? I give you a do-over, Drew. Something you’d go back in your career, and you’d like to have another shot at it.

Rosenhaus: If I could do it all over again, I probably wouldn’t have done that “Next Question” press conference [laughing] with Terrell Owens. You know I probably would have said, “Hey Terrell, go out and make your statement, and let’s just leave it alone.” Instead I tried to, uh, do right by my client, field questions by the Philadelphia media, and it was a disaster [more laughing]. I wasn’t proud of saying “Next question, next question, next question.” I’d prefer to have that one, uh, erased from the memory banks.

So, the very same moment is both the apex and gutter of Rosenhaus’ career—the answer varies depending on which day you ask him. It’s the first thing about his decades in the NFL that he’d like you to remember and also the one moment he’d like you to forget all about. Your guess is as good as mine here.

Rosenhaus’ bizarrely selective memory is hardly a one-time incident. Tales that he tells about his own life are rife with gaping plot holes and internal inconsistencies. As a narrator, his bumbling naiveté is so confounding that, when coupled with the incongruent fact of his perpetual business success, I have to believe that Rosenhaus approached book-writing as he probably approaches a negotiation: as a shark who maddeningly won’t put all his cards on the table.

For instance, here is the complete description of Drew’s first direct exposure to NFL players:

Living in Florida, it was only natural for our dad to become a Dolphins fan and for us as well. In the early 1980s, my dad had become friends with some of the players, including tight end Joe Rose, who is now a very successful sports-talk radio and TV personality in South Florida. Joe and some of the other players often came over to our house on Tuesday nights for a home-cooked meal.

Oh, yeah, you know what that’s like, just comin’ home from high school and chewin’ the fat with some of the NFL players who are hanging out in your dining room. Where is the getting psyched out of your mind that you got to hang out with football players, where is the bragging at school the next day, the promised fealty for life to the Miami Dolphins for producing such an amazing experience? The fact that Drew doesn’t find this quantum evolution from (a) rooting for the local team to (b) yakkin’ with them over a plate of meat loaf at all remarkable or worthy of the briefest explanation, well, it makes the story pretty unbelievable. But then this has to be real, doesn’t it? There’s no reason for Rosenhaus to tell straight-up lies about his childhood in his own book, and if he did there’s no way he would get away with it, right? Right?

Another decidedly queer story that Rosenhaus proudly tells—in both Next Question and in the LeBatard interview—is from the 2003 draft, which he watched with a client of his, running back Willis McGahee (who still carries on in the NFL a decade later). Worried that the first round would drift by without any teams selecting McGahee, Rosenhaus proceeded to set in motion what he considers one of the highlights of his whole career: using his own cell phone, he dialed McGahee’s cell phone, and they had a conversation, sitting side-by-side but also on their phones.

Here is why that is supposed to be a highlight of an entire professional life: Rosenhaus believed that teams who were watching draft coverage would see the live footage on ESPN of McGahee on the phone and, believing that it was another team on the phone trying to corral McGahee, would immediately draft him. Now, yes, the Buffalo Bills used their first-round pick to select McGahee immediately after this li’l ruse, but first, a bit more about how the NFL Draft works.

Each of the 32 NFL teams employ scouts whose job is to do nothing but scour the nation’s large and small college teams, endlessly searching for the (on average) seven players a year out of the thousands available that their organization will invest their money and their future in. On the days of the draft, each team also sets up what is euphemistically (but also seriously) called a War Room: a massive conference room or amphitheater teeming with scouts, executives, coaches, and other staff, each armed with an arsenal of monitors and phones. It takes this entire beehive of technology, expertise, and financial investment in order to ultimately just dial a phone and give the person on the other side the name of another person. The frightfully layered chess games and chess-games-within-chess-games and trades that do and ultimately don’t happen during the draft are responsible, far more than any other event, for the competitive state of today’s NFL (whatever that state may be). Drew Rosenhaus knows all of this.

If there are teams out there whose entire drafting strategy can be tossed out upon witnessing a single prospect simply talking on a cell phone… they deserve all the losses that are coming their way. And there will be many losses. There’s no way the Bills drafted McGahee just because they were in a Rosenhaus-instigated tizzy—picking McGahee secured another link in their ever-growing chain of successful running backs, one of the few perennial strengths of that oft-beleaguered team.

So but even though Drew Rosenhaus is a completely disorienting author, read between the lines and every so often you’ll see oh so bright glimmers of how truly great an agent he is. All of the peripheral clues seem to corroborate the notion that Rosenhaus in running an unsavory network of snake oil distribution. But in one sense there’s hardly a more brazenly honest profession than sports agency. In every negotiation he’s ever been a part of, he’s fought for the largest salary possible for his client—this is the one job that his client hired him to do—while the NFL team on the other side fought for the lowest possible salary (either out of cheapness or, hopefully, from a shrewd blueprint to fit as much talent as possible on the roster). Every motive—the only motive—of both sides is inherently naked before the meeting even starts.

No team is ever technically beholden to do any business with Rosenhaus, a pesky freelancer zipping around a land of corporate giants. But not only do they take the meeting with him, they also agree to sign his clients to contracts far, far exceeding expected market value. There’s not a single thing disreputable about wrenching as much money as possible from a team’s coffers—in one interpretation there’s even something a little Robin Hood about it—Rosenhaus simply outworked everybody else in questing to find the league’s very uppermost limit in how much they value Player X. I have no idea how he does it, whether through slick charm or dogged persistence or with a boost from Jason’s statistical analysis—and, yeah, this book would have been a great place to find out—but somehow Drew Rosenhaus always does it, always finds a way to get the deal done.