Natalie was actually the first to call the cops, not Ryder. One afternoon, I meet Natalie at a neighboring bar where she bartends in addition to The Twilight Exit. I wait until she finishes her shift, and then we sit at a wooden booth to talk. Natalie’s in her late 20s and has vivid eyeshadow and wavy black hair, with a chunk of bangs dyed candy green. I don’t know her super well, but she’s always come off as cool and fun. She gives off the vibe of someone you’d want to stay up with all night, playing Ping-Pong in your neighbor’s basement.

Natalie had seen James and Whitney together in the evening before the shooting. “I was bartending,” she said. “I work a double on Sundays, so I’d started at five. They had their baby in the bar with them. They were with an older child too, and an adult couple. They all eventually left, and none of it was memorable. I just know they didn’t look like they were having any arguments or problems about anything.”

Whitney returned by herself about an hour later. “I was at the bar ‘til the shift-change. Starting at nine, I bar back. If it’s not busy enough for me to be on the floor, I take a break,” said Natalie. “That night wasn’t busy, so I was on break, sitting at the bar. That’s when Whitney came in. She seemed distraught. She asked if she could use my charger because her phone wouldn’t turn on, so I let her borrow my charger and my phone,” Natalie said. This sounds like an awkward position for Natalie to be in, but it wasn’t. “I didn’t mind. I kind of knew her and James as regulars, and I’d watched their baby for my other job at the YMCA,” she said.

Whitney sat on a stool at the bar and spoke quietly on the cell. “From where I was, I could hear pieces of her conversation,” said Natalie. “I assumed she was talking to her mother or maybe a close friend. She was venting. I heard her say James was going crazy and they were fighting. She was saying, ‘Yeah, he flipped out. I don’t know what I’m gonna do. I’m trying to think.’ She’d made a couple more calls, asking friends to come get her, and then I heard her call a cab. I’m pretty sure she’d talked to James too. She told him where she was and said ‘Yeah, you can come down here.’”

Not long after, James showed up and approached Whitney. “He was like, ‘You need to get out of here, we need to go home.’ She didn’t want to. They got into a bit of a scuffle. She was like, ‘Get off me.’ She was struggling to get back onto her stool. I guess he pulled her hair. He was trying to snatch her ponytail and cave-man her out of the bar,” said Natalie.

(My memory of this interaction is a little different than Natalie’s version, but I’ll get to that description later.)

“I jumped up and so did a couple other customers. Greg separated Whitney and James and walked him outside. Whitney stayed where she was. She was saying she didn’t know who James was, that she’d never seen him before, that he was a crazy person. I just sat there listening to it all. I was like, ‘I’ll stay out of it, I’ll let her tell her story.’ But at the same time I was thinking, ‘Are you out of your mind as well? Because you know that I know you guys are together. I know you guys have a kid. Exactly what are you trying to pull?’”

“That was the second or third altercation they’d had in the bar, and it was unacceptable. I couldn’t have them keep coming in and fighting like that. When Greg came back inside, I told him and my other coworker, ‘I am done. I am washing my hands.’ At that point, we all agreed we were gonna 86 them. The plan was, Greg was going to talk to James, and I was going to deal with Whitney. I thought it’d be better if I waited to bring it up to her until she was leaving.”

Things quickly returned to normal. “I stayed seated at the bar and maybe fifteen or twenty minutes passed. Then I got up to have a cigarette, because I still wasn’t needed for work. I didn’t think anything of it. I opened the front door, then I saw James outside, trying to get into the bar. Greg said over his shoulder, ‘Go call 911 right now,’ and he kind of shoved me. I shut the door, and I turned around, and as I was moving towards the house phone, I heard the gun go off.”

“I grabbed the phone and dialed 911. I screamed out to everyone, something like, ‘Get the fuck out, he just shot Greg!’ I saw James enter the bar. He had the gun in his hand, there was smoke coming off. I could smell it. That’s the most vivid memory I have, the smell of gunpowder. And blood. It smelled like blood.

(If this sounds like an exaggeration, it’s not. In large volumes, blood emits a powerful metallic odor, and Greg had already spilled several pints.)

Phone in hand, Natalie grabbed her other coworker from the bar, then ran back through the kitchen and got Jake, the house cook, before rushing to the patio.

“There was another person who somehow ended up with us too. Maybe the gunshots were happening right as he was coming out of the bathroom. He was some random customer. A white guy in his early 20s. He wore fairy wings and lots of glitter. I think there was some weird birthday party going on. I’m pretty sure he was on Ecstasy. He was just so far removed. He shot past Jake, and then he was, like, bouncing around the kitchen. When we got to the patio, he tried a couple times to jump over the fence, but it was too tall, and he couldn’t make it,” said Natalie.

In a separate interview, Jake said basically the same thing. “He seemed kind of high, the dude with us. Or he might’ve just been really, really freaked out. He had fairy wings on. He wore glasses. I think he’d gotten caught between the shooter and the kitchen. He really wanted to jump over the patio’s fence.”

The back patio at the Twilight has lots of slatted wood and haphazard sea-themed decor, and a sturdy fence fully encases the perimeter. While there are no obvious exits, a closet-sized storage space tucked into a corner offered a little protection. The “hidey-hole,” as Natalie calls it, is secured by a wooden gate that latches shut. As they closed themselves inside, “the four of us were hugging — my two coworkers and the fairy dude,” said Natalie. “I was down in the middle of it. We were trying to be really quiet. We knew I needed to be on the phone, but we didn’t know what was going on. I heard a gunshot, and I thought James was shooting up the bar. Everyone was trying to muffle my voice and the sound of the operator. I was trying to talk. I was trying not to cry. Jake was literally holding me up. He had his arms around my shoulders. He was squeezing me really tight. I was shaking so bad I could barely stand up.” 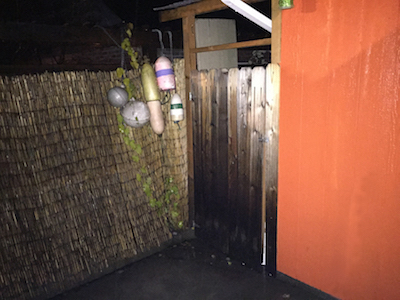