While international attention has shifted recently to the carnage in Syria and North Korean President Kim Jong-un’s belligerent declarations of a forthcoming nuclear holocaust, the Iranian regime has gotten a hall pass from the international news media, who seem hell bent on ignoring this catastrophe-in-waiting in favor of running White House propaganda ensuring us that we will all be fine if we simply brainwash every 4-year-old in America with a socialist preschool education.

The land of Iran is a mysterious, sand-shrouded hell stuffed with the shrieking sounds of the bazaar and the babble of whatever language it is that they speak there.1 While it is nearly impossible to penetrate the byzantine layers of booby traps and sorcerers guarding their borders to observe these devil people in person, we asked an APMAG artist create a rendering of what we’re fairly certain a typical Iranian citizen looks like: 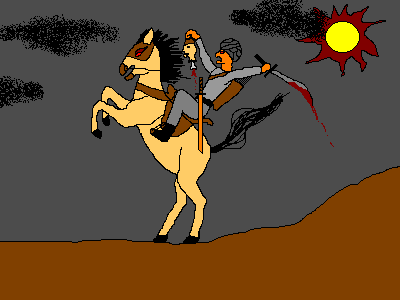 Probably the closest we have ever come to an authentic glimpse inside this Medieval hellhole is the 1992 Walt Disney movie Aladdin, which is set in a place that very likely could be Iran, portraying it as an iniquitous pit of thieving, scheming sultans and genies, driven past the brink of insanity with greed, lust and a thirst for power. As the cast of characters rampages from town to town, mutilating and killing every innocent they encounter, the audience captures glimpses of a corrupt and dysfunctional culture poisoned by the infinite depravities of Islam, where people are beheaded simply for smiling or asking for the time.2

That this menacing population is poised to invade the United States is all but certain. And forget, for a moment, that nation’s rapidly evolving nuclear capabilities. Imagine 10,000 warriors on camel-back, charging up from the deserts of our arch-enemy Mexico,3 pillaging our towns and cities; or, an equally large brigade, charging down from the Canadian tundra aboard their flying carpets, scimitars raised, death calls rattling from their throats; or, perhaps this: a million ornate antique bottles, sitting in a million American homes, suddenly activated with a snap of the fingers from the Iranian Death Machine, and a million genies spring out, obliterating our landscape in mere minutes. While this may sound like fantastical delusions, just take a look at this recent Iranian invasion plan of the United States seized by secret agents working deep undercover in Tehran: 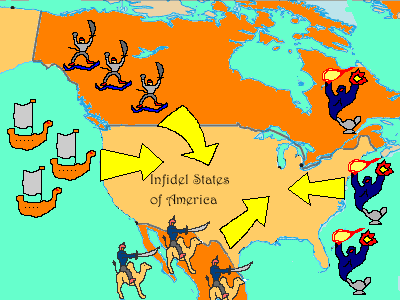 But even setting aside this invasion plan, reasons for a preemptive strike against this towering smokestack of evil are hardly scarce. Aside from the clear and imminent threat posed by Iran’s military might, one need only note that nation’s odd-sounding language, peculiar manner of dress, state promotion of an un-American religion, and proximity to Iraq and Afghanistan to conclude that this is a nation that threatens America’s very existence. Those who doubt the existential threat posed to America from these cultural differences should spend a moment studying this soup recipe that fell out of the pocket of an Iranian tourist visiting Boston recently: 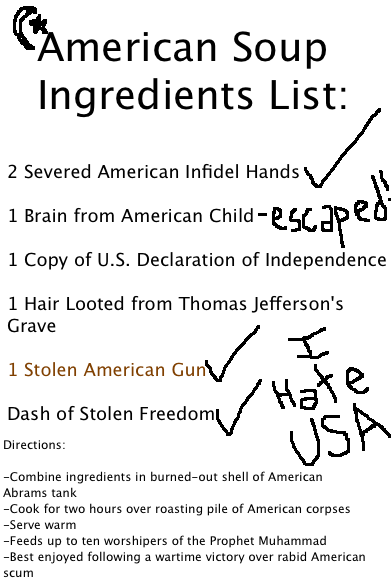 So far, the Obama administration’s reaction to this imminent threat has been a predictable mixture of rehashed pacifist mumbo-jumbo, appeasement, and hallow sanctions. In fact, only the heroic efforts of the Republican-dominated House of Representatives have saved the U.S. from a full-scale capitulation to Iran’s every megalomaniacal demand. Just take a look at these articles of surrender that a terrified President Obama had drawn up when he heard that Iranian President Mahmoud Ahmadinejad was coming to New York late last year for the UN Assembly: 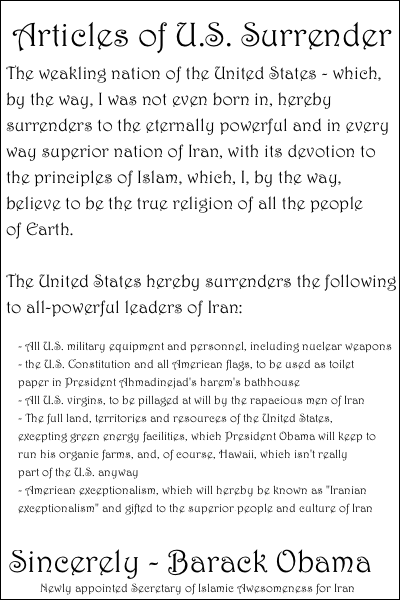 This is clearly unacceptable, and an alarmed House silently killed this cowardly act of surrender in committee. However, we must not let our cowed leader dictate the manner of U.S. action. It is our duty to expunge this menace from the surface of the Earth, paving their way to Hell one Tomahawk missile at a time. Just as we drove communism from the planet with our demolition of the Vietnamese imperialists and saved the world from its inexorable transformation into a forest of mushroom clouds by declaring war on the formidable military machine that was Saddam Hussein’s Iraq, the United States Armed Forces will attack and defeat evil at its core, with no possible ill side effects that any reasonable person could name.

APMAG proposes a full-scale military assault, Operation Fuck up Some Muslims, to be carried out in the following stages:

Stage 1: Create a Perimeter Around Iran

Make no mistake, it is us or them in a ruthless game of survival, and the United States must not allow itself to be bulldozed into oblivion by an unrelenting beast bent on our destruction. The freedom not just of America, but of the world may well be at stake.

2 This is a loose description of what may or may not have actually been the plot, characters or settings of the Walt Disney animated version of Aladdin, which the author of this paper has not actually ever seen.

3 While we are technically at peace with Mexico, it is APMAG’s long-standing position that the 10 million illegals they have sent across our southern border over the past two decades are the vanguard in a massive assault force intent on subjugating the United States in retaliation for their losses in the Mexican-American War

4 Let’s be honest, with a population somewhere north of 180 million, Pakistan would be an enormous pain in the ass to invade if we had not yet conquered Iran. There is little doubt, however, that this nuclear-armed state would prompt U.S. ire if given enough time.

5 A “strategic point” will be considered any area with a population of more than one person per square mile.

6 These pilgrims will be randomly selected from a pool of Republican voters in right-leaning states.