No one was surprised last month when the liberal la-la land known as Detroit finally collapsed, victim of decades of Democratic mismanagement, union overreach, bloated government, and high taxes. As the crack-addicted, dying industrial relic reels into bankruptcy court in an attempt to excuse itself from $18.5 billion in debt, it is worth peering into the APMAG crystal ball to see what future awaits this once-great harbor of capitalism and industry.

We will get no useful suggestions from Democrats, of course, who are far too busy pinning the city’s decline on everything from globalization to racism to our failure to tax oxygen. Such delusions can be discarded with a glance over this page from a recent Detroit budget, which shows the misplaced priorities of a city hurdling toward catastrophe: 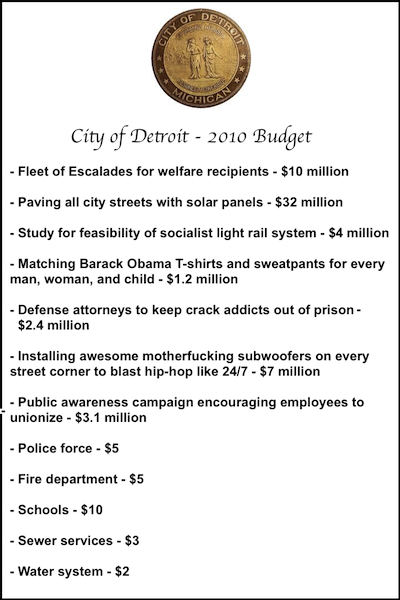 The city’s disintegration should barely rate as news for Democrats, who have made the principal catalysts for its downfall the central tenants of their party plank for decades. Just take a look at this never-distributed 1980 Jimmy Carter campaign poster that APMAG researchers recently discovered in his archives: 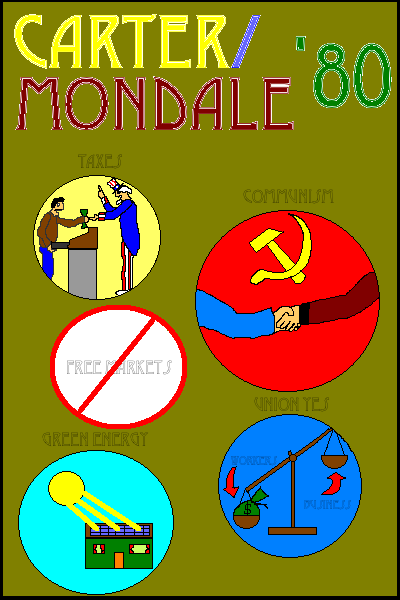 Enough. While Detroit’s state-appointed emergency manager, Kevyn Orr, has proposed several excellent conservative solutions for righting the sinking city, including privatization of essential city services and dismissing overpaid union employees, those are solutions for some of the more intact liberal bastions, such as Chicago or New York, to consider. What Detroit needs is not a renovation but a demolition, to be excused from the United States map like the learning-disabled student is expelled from a classroom for disrupting his smarter classmates.

This deconstruction would of course require a mass relocation of the city’s remaining 700,000 residents. It should not be difficult to compel them to leave. No one wants to live in Detroit anyway. The weather is lousy. Crime rates are stratospheric. There are too many black people. As the vast majority of the city’s residents are crack-addicted arsonists whose only redeeming characteristic is their fondness for handguns, they can be relocated to prisons or to welfare-loving socialist redoubts in New England.

With Michigan cleared of 700,000 Obamaphiles, the state and its 16 electoral votes should at long last revert to the Republican column in national elections. More importantly, however, is that 138 square miles of prime real estate will suddenly be available for redevelopment. APMAG is pleased to offer a tantalizing menu of options for the Detroit of the future:

Option 1 – Repurpose the city as a military training ground. Rather than simply razing Detroit’s tens of thousands of decrepit buildings, the streetscape could be repurposed into a full-scale urban warfare training ground for the U.S. military. Not only would training exercises conducted in such a setting help prepare our soldiers for the long-overdue invasion of Syria, but the vast military presence along the Detroit River would act as a bulwark against the Canadian socialists.

Option 2 – Establish a special Milton Friedman Memorial Economic Development Zone. Rather than continue the mass outsourcing of manufacturing jobs to impoverished Southeast Asian morons who can’t even speak English, we could rope off a large swath of Detroit that will operate under a set of business-friendly policies, reigniting the industrial spirit of the Midwest. Michigan of course already has the basic framework for such an economic arrangement in place, having ratified a worker-friendly Right to Work law earlier this year. Additional steps would include exorcising all OSHA and EPA regulations, installing a maximum wage, and importing a large number of low-wage workers from Southeast Asia. These workers can immediately begin work building an armada of these X-52 Rolling Death Wheels, a prototype of which can be seen in the photo below taken at a training facility in New Mexico: 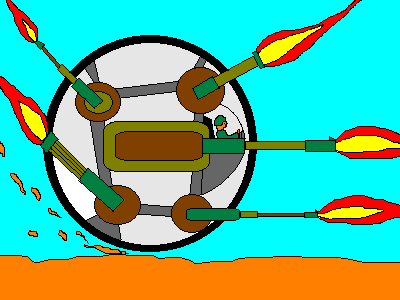 Option 4 – Build Landmine World. In the unlikely event that Michigan’s Republican-dominated state government fails to approve building permits for such an extravagant construction project as Motown World, we can present them with a less-intrusive alternative: Landmine World. The desperate need for this vital project can hardly be overstated. In short, there is not nearly enough demand for landmines in Southeast Michigan to keep the landmine factory that we will build in the Milton Friedman Memorial Economic Development Zone running anywhere near capacity. Plus, everybody loves landmines: they deter terrorist attacks, keep meddlesome forest creatures out of your garden, and provide dexterity-building obstacle courses for youth, who love nothing more than dashing through a field of these exploding miracles for sport.

Option 5 – Establish a holding area for illegals awaiting deportation. With Detroit cleared of its entitlement-mad masses, we can at long last build much-needed holding pens for the illegal riffraff awaiting deportation. Rather than cluttering up our supermarket lines with their shopping carts full of Goya beans, these felons will be sequestered in this special area, where they can put their experience hanging drywall and pouring concrete to use building Motown World.

While none of these options is perfect, any combination of them would be preferable to the decaying industrial graveyard that Detroit has become. Hopefully some serious-minded friend of Detroit will soon emerge to restore glory to this once proud emblem of Midwestern industrial might.