How the Chicago Cubs
Can Reelect Obama 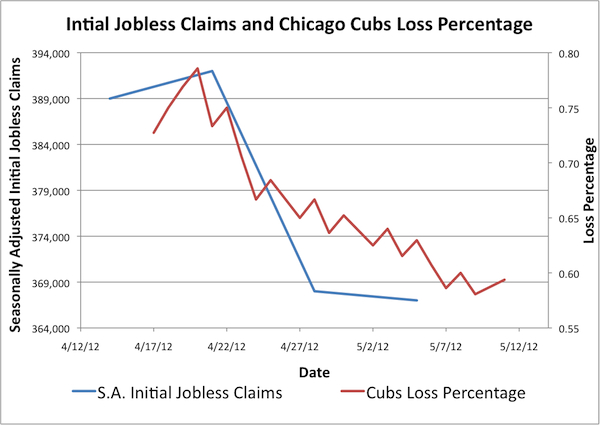 Just as nobody expects the national employment numbers to be particularly good this year, nobody expects the Chicago Cubs to be particularly good either. Americans/Chicago sports fans do, however, expect improvement in both employment opportunities and on-field performance in order to rationalize their optimism for a brighter future. For the un-or-underemployed, hope for a more robust labor market rests upon the shoulders of either incumbent President Barack Obama or his challenger Mitt Romney. For Cubs fans, wunderkind first-year President of Baseball Operations Theo Epstein carries that burden. Fortunately for Epstein, he appears to have the full support and confidence of his constituency. Neither Obama nor Romney enjoy that same luxury, and the winner of the 2012 Presidential election will therefore likely be determined by how the employment situation unfolds over the coming months; If the rate at which people file for unemployment drops between now and November, Obama will likely occupy the White House for another four years. If not, Mitt Romney will be taking over the lease. So what can Obama do to help Americans keep their jobs and subsequently keep his own? At this point in time, not much. Obama’s reelection hopes are now subject to the whims of the economy and, perhaps more distressingly, to the Chicago Cubs. In fact, Obama’s best hope for reelection is the Cubs’ timely climb up the National League Central Standings.

2011 was not a good year for either the Chicago Cubs or America’s unemployed. Still, as the ball club ever so slightly improved over the course of last season, so did the national employment numbers. For example, on June 4th, 2011, the Cubs loss percentage hovered around its season high of 60%. On that same day, the Department of Labor released a report showing that the seasonally adjusted number of initial jobless claims rose 1.43% from where it was at the beginning of the year—not a positive sign of recovery. However, by September 24th, the Cubs had reduced their loss percentage to 56% and the BOL released a report showing new jobless claims had reversed direction, dropping 6.2% relative to the beginning of the year.

Now, it’s not as if anybody was ecstatic with the overall employment picture or the Cubs’ season; the national unemployment rate was still a ghastly 8.5% at the end of 2011 and the Cubs finished a head-shakingly awful twenty games under .500. But in the world of politics and baseball, where you are incites less passion than the direction you’re headed, and the improvements made by the team and economy were cause for cautious optimism.

The good news for the Obama campaign is that this trend of the Cubs’ shrinking loss percentage resulting in fewer jobless claims has carried over into 2012. While the Cubs started the season in woeful fashion, suffering two separate six-game losing streaks, their performance has slowly crept into the realm of near-respectability, and it is now feasible the Cubs will finish outside of the NL Central basement.

More specifically, the Cubs strong(ish) play en route to a 7-6 record during the month of May caused initial jobless claims to drop from 388,000 during the week of April 14th to 367,000 during the week of May 5th. And with the Cubs six games under .500, there’s still plenty of room for improvement in both loss percentage and jobless claims. If the Cubs can string together a few more of these winning months, they will be able to credit themselves with keeping Obama in the White House.

While President Obama is a diehard Chicago White Sox fan, it would behoove him to cheer for the Cubs this summer. Indeed, Obama’s campaign manager Jim Messina will likely be glued to WGN, hoping Cubs manager Dale Sveum can find a reliable, healthy closer and beleaguered slugger Alfonso Soriano can remember how to hit. If the Cubs need some extra motivation, perhaps Messina can schedule a campaign stop at Wrigley Field, giving Obama the opportunity to sing to the crowd during the seventh inning stretch. The trip to the North Side would be well worth the campaign team’s effort as the better the Cubs play, the better Obama’s chances are of retaining the Presidency.