If you are a CEO in America today, one would think you have it pretty good. Your scrappiness and fortitude have driven you to the very top of the income scale, where you earn, on average, more than 500 times the average worker. While the liberal media machine relentlessly attempts to characterize you as a nefarious capitalist robber baron stealing from the ranks of the proletariat, you know that you earn more because you deserve to earn more, because you work harder than everyone else and always have, ever since your father sent you to Yale because someone in the admissions office at Harvard had an agenda against you. Now that you have achieved the apex of your professional life, you pride yourself on being a job creator, rabidly focused on creating jobs your every waking moment.

This toil has brought rewards: you likely own several homes, drive an imported Italian sports car and possibly an airplane, and have a sprawling staff to do everything from raise your children to choose your wardrobe to select which factory you will relocate to Indochina (or Indonesia or whatever that country is called) next. You are likely part of the five percent of Americans who control 72 percent of the nation’s wealth. So grateful are you for free markets and America, and so vast is your disposable income, that you would not be uncomfortable purchasing several sets of this patriotic gold-plated dinnerware depicting an eagle nobly spreading its wings before an American flag as it thwarts a dynamite-wielding terrorist evil-doer: 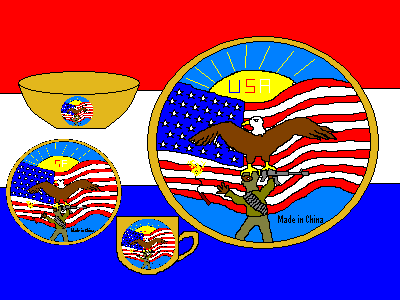 You would of course toss these plates in the garbage after each meal, because 1) reusing dishes is for poor people, and, 2) recycling them would make you some sort of urban hipster crybaby wannabe, and everyone hates those people.

Yet, for all its advantages, life as a CEO—or as a head fund manager or venture capitalist or bond trader—has pitfalls unique to American life. As maligned as this group of devoted capitalists has become over the past few years, it is this top 10 percent of Americans who pay 90 percent of federal income taxes.

That’s right: a mere 10 percent of the most patriotic and hardest-working Americans are annually frittering their hard-earned dollars away on roads, border security and food stamps for the 90 percent of shoe-shiners and ditch-diggers beneath them. Meanwhile, the bottom 47 percent—yes, the same 47 percent who excoriated whoever that fellow was who ran against Comrade Obama last year in the presidential election—of workers paid little or nothing in income taxes.

This must change. Nowhere in the United States Constitution does it state that we founded this country as an enormous charity for jobless losers and drug addicts. Yet, we have become a titanic redistribution machine, which requires that a minority of its hardest-working and most-productive citizens support the freeloading bottom-feeders. For a graphic illustration of the inequity of this system, just take a look at this depiction of a yacht attempting to tow the welfare-addicted city of Chicago around Lake Michigan:

The problems with such an iniquitous system are myriad. The priorities of the real tax payers—the elimination of labor laws, a reformed tax code, personal Major League Baseball teams for anyone who earns more than $1 billion per year—go ignored, while the excesses of the weeping poor—public schools, clean tap water, classification of everyone as a minority—are thrust to the front of the legislative agenda. And then there is the stupendous loss of economic activity as dollars are rerouted from high income-earners’ bank accounts and into the federal treasury. For just one example of this ongoing economic catastrophe, take a look at the excess inventory at this Los Angeles-area helicopter store: 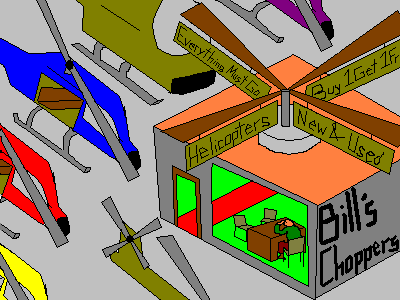 The store owner, who barely cleared nine figures on his 2012 income taxes even after writing off the new fusion food cafeteria he built for his stable of prize-winning Arabian racehorses, informs APMAG that sales were down so much that he was uncertain whether he would be able to afford to maintain the 900-acre orchid farm that he bought for his daughter’s 16th birthday.

Enough. For far too long, the 90 percent have stolen from the one percent, looting their money vaults to build their roads, fund their unemployment, staff their police departments, and subsidize their liberal radio networks. If the job creators at the top of the tax bracket are ever to focus on the very serious work of fixing our economy, they need help in a partial overhaul of our byzantine tax code. APMAG hereby proposes the Job Creators Tax Credit of 2013, a multifaceted overhaul of the tax code comprising the following components:

1) Rather than forcing the job creators to pay unevenly toward the Federal treasury, each person would contribute an equal amount. Some cynics will no doubt disparage this as a regressive tax, but we prefer the term “income-adjusted public domain contribution.” This would be a universal requirement, so that those free-riders previously deemed too old or young to work would have to find a way to earn their contribution.

2) For every job that a job creator created, they would take “ownership” of that job, meaning that they would be entitled to all earnings generated from that job, after that person has paid their contribution to the Treasury. This is of course entirely logical: had the job creator not created the job, the income would not exist, therefore the income generated from the creation of this job is the job creator’s creation, and is therefore the property of the job creator, who could then invest the money immediately into creating more jobs, which is of course exactly what he1 would do. With job creators creating jobs at an explosive rate, the United States should reach full employment in very short order. The limp-wristed save-the-whales crowd would likely disparage this system as some sort of “slavery,” which is of course complete nonsense—unlike its pre-industrial antecedent of the same name, these modern titans of commerce would be under no obligation to provide these barely-skilled masses with food and housing.

3) Credits could also be earned for each of the following: installing a personal squash court, buying more than one vacation home, purchasing a new airplane, or converting a wing of your house into a salt-water aquarium. Many of the proposed available credits are spelled out on this draft of IRS Form 1%, which APMAG has drawn up to present to the IRS: 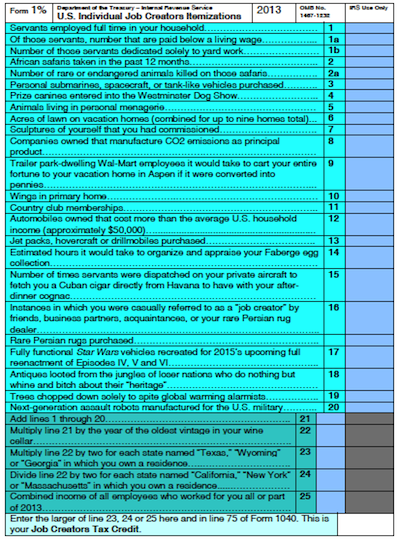 This tax credit would of course unleash an economic tsunami that could have been equaled only by APMAG’s Titanic Tanks Tax Act.2 Rather than blowing their income on admission tickets to demolition derbies and malt liquor, the freeloading 90 percent would at long last make a fair contribution to their society while redirecting their income to the place that it would do the most good—the hands of job creators.

1 In the unlikely event that the job creator was a woman, the income would of course become the property of the woman’s husband. This safeguard would ensure that the income was invested directly back into job creation, rather than wasted on cosmetics and subscriptions to O magazine.

2 The Titanic Tanks Tax Act of 1995 would have introduced a check box on all U.S. 1040 forms offering Americans the option of donating $3,000 to build an unstoppable military machine capable of conquering the entire Earth in hours without fouling the countryside with nuclear waste. Unfortunately, this act never made it out of committee, probably because Congress had some urgent business approving regulations for seal feed or making sure every homeless child in Nairobi gets an Xbox in their Christmas stockings.