As children around the nation dust off their backpacks and head back to school, astute parents would be wise to monitor classroom materials to ensure none have been stamped with a hammer and sickle. That is because the headlong rush into socialism that was put on overdrive by Comrade Obama’s re-election last fall is gaining velocity with the steady implementation of the Common Core education standards.

For those of you too busy hiding your firearms from federal confiscation squads to pay attention, the Common Core can best be summarized as follows: if Obamacare, with all its attendant federal waste and tsunami of government cash, raped the No Child Left Behind Act, with its testing mandates and usurpation of local powers, the mutated and no-doubt crack-addicted offspring would look very much like the Common Core. Just take a look at one rejected cover design for the Common Core standards booklet, retrieved from a rubbish bin outside of a printing facility in Delaware, to see how rife with left-leaning symbolism this whole grand child-devouring experiment is:

Promoted by the far-left establishment as a common sense way to prepare young Americans to compete in the global economy, the Common Core is actually a toxic, top-down grab-bag of arbitrary math and reading standards that are simply a further step toward liberal utopians’ secular dream world, in which we all dine on organic cabbage and smoke hashish beneath a holiday tree, whatever the hell that is.

Whatever rhetoric liberals use to promote these so-called standards however, they are far from innocuous. Like every liberal policy from welfare to Section 8 housing vouchers to suffrage, they are tailored to appeal to very narrow special interest groups, and will suck up dump trucks full of federal cash with no benefit to the great majority of the population. To see proof that the Common Core is on just such a dysfunctional track, take a look at the photograph below of President Obama reviewing a final draft of the standards with a panel of gays, illegals, women and minorities at a secret bunker in Oregon: 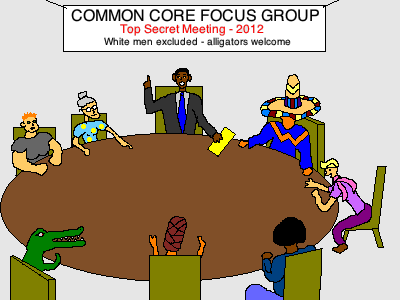 Just as Obamacare is set to devour our world-class healthcare system, the Common Core is sharpening its claws for a feast on our first-rate education system,1 starting, of course, by abrogating decision-making powers from local authorities and delivering them to a cabal of Washington bureaucrats. For those who think that this is conspiracy-theory hyperbole from some right-wing nut-job, just check out the photograph below of a squad of specially trained, genetically enhanced2 grizzly bears tossing a Colorado school board administrator into the back of a garbage truck:

As with all liberal policies, the Common Core standards emphasize the superfluous and the inane while ignoring any practical solutions to the educational and cultural crises devouring our nation’s soul. Fully one half of the standards, for example, is dedicated to mathematics. Have these idiots never heard of a calculator? Math is an outmoded and overrated practice, as necessary in this modern world as a course on catapult construction or steamship maintenance. Another half of the standards is dedicated to the English language arts, an absurd waste of resources when you consider that even 5-year-old American children who are not the offspring of welfare-addicted illegals can speak the language fluently.

If we are going to dismiss the federalist values at the core of our republic to implement some Soviet-style education system, we could at least emphasis those topics that will best prepare our children for the challenging global economic landscape that they will face. APMAG hereby proposes the APMAG Common Core, an educational foundation built upon the four essential skills that any student must master to have a realistic hope of succeeding in the 21st century: Jesusology, warfare and fighting techniques, free-market economics, and patriotism.

1. Jesusology: Taught in tandem with textbooks from our friends at the highly respected Jesus Institute for Science, courses in Jesusology would emphasis Jesus’ primary role in every key development in our nation’s history, from writing our Constitution to winning World War II to (mostly) keeping black people in their place. Jesusology courses encourage the development of Jesus-based solutions to problems such as healthcare, global warming, poverty, gay marriage, abortion and integrated schools. Where liberals spout predictable and ineffectual policy- and science-based solutions to these longstanding controversies, Jesusology clarifies that most problems can be solved if you simply pray really, really hard. Courses in Jesusology would be complemented by visual aides such as the poster below, which depicts a Washington State man shielding himself from an erupting volcano by praying that it will miss him (note that his children, too distracted by texting to pray, are incinerated by the volcano): 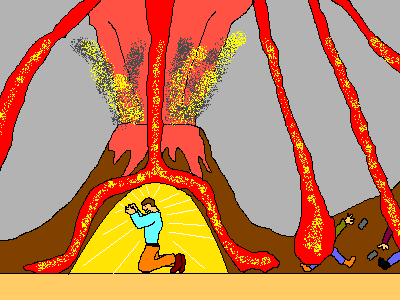 2. Warfare and fighting techniques: most high school graduates are staggeringly unequipped to fight in the large number of full-scale land invasions that will be necessary over the next several decades. Once President Ted Cruz ascends to the Oval Office in 2016, the United States will begin a series of long-overdue but entirely necessary invasions of hostile enemy nations such as China (too communist), Saudi Arabia (too Muslim), France (too French), and Puerto Rico (too many illegals too close to the U.S. border). The millions of soldiers that we will need to fight for our freedom will not need to know how to calculate the area of an isosceles triangle or recite some pansy woodsman’s ballad; they will need sound training in urban warfare, munitions, marksmanship, and hand-to-hand combat. Those who doubt the primacy of such skills in a 21st century workforce need only glance at the updated admissions application that none other than Harvard University will use starting with the 2014-15 academic year: 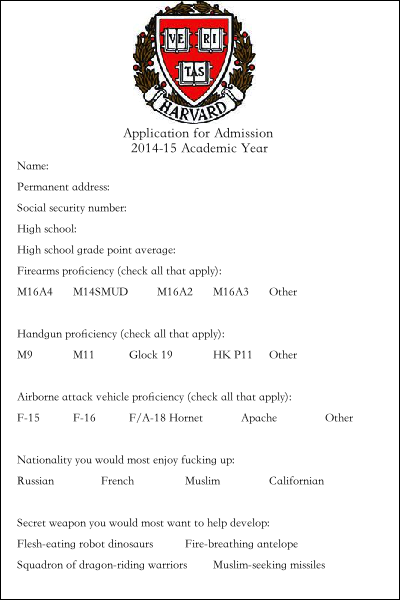 3. Free market economics: While it is true that most U.S. high schools offer some laughably rudimentary version of economics, most of them come nowhere near emphasizing the single most important tenant of modern conservative thought: Economics only works if business can do whatever it wants. The students of tomorrow must understand that onerous food inspection, worker safety, and consumer information regulations undermine the single most important element of a modern economy: investor profits. Only by clearly demonstrating that long-accepted tenants of the economic mainstream such as the minimum wage, 40-hour workweek, ability of workers to unionize, and banking regulations are actually insidious liberal plots to supplant our capitalist economy with a government-run system in which all corporate profits are redistributed to jobless pregnant teenage minorities to buy plasma televisions and iPads for their pit bulls, will we succeed in establishing an economy worthy of the United States. To get an idea of how powerful our economy would be should we convert to a true free-market system, take a look at this photograph of a bulldozer running over a seal while developing an oil field on the Alaskan tundra: 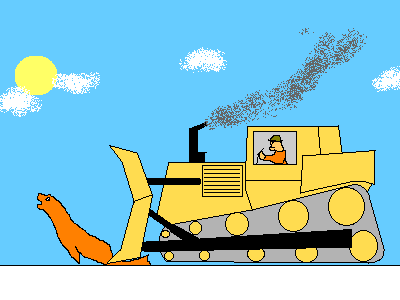 4. Patriotism: The principal problem of today’s schoolchildren, and today’s Americans in general, is that they are not nearly patriotic enough. The fact that we only salute the greatness of our nation twice over the course of a typical nine-inning baseball game – and maybe another cursory time or two if there happens to be a flyover of attack jets or a uniformed veteran in the stands – speaks to the abysmal regard with which most Americans hold their nation. To that end, opening each school day with the Pledge of Allegiance is simply not enough. Such pathetic tributes inspire evildoers the world over to conclude that we are a collapsing nation of weaklings who hate our own country. In order to ward off the nefarious plots that naturally emerge from promoting this mindset among our enemies, we must throw a massive forcefield of patriotism over our nation. We should mandate American flag-themed school uniforms, assign each student a bald eagle to train and care for, require that each student kill one illegal immigrant per school year,3 and hold invade-a-neighboring-classroom seminars to prepare these future patriots for the task of conquering and slaughtering hostile nations, such as Iran, North Korea and Canada. To understand the rewards of true patriotism, take a look at this recent shot of the gates of Heaven, where God has installed an express entrance lane for the most patriotic Americans: 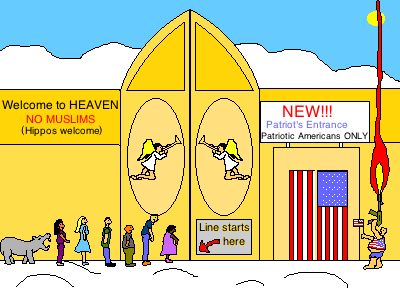 By requiring schools to construct curriculums around these four essentials, we will ensure that American children are prepared for the future while receiving an education consistent with the conservative values at the beating heart of our nation. Now that’s common sense.

2 APMAG has in fact known about Operation Kodiak, as the U.S. government’s top-secret initiative to replace human soldiers with an elite corps of grizzly bears is known, for decades. While hiking through a Rocky Mountain forest in the mid 1980s, APMAG’s founder inadvertently stumbled upon an entire platoon of these fearsome man-bears in the middle of their exercises. When these ferocious creatures spotted him, they began shouting in a strange language that sounded like Mexican, and charged toward him. He escaped only when he had the presence of mind to toss the full picnic basket that he had been carrying in the opposite direction, distracting the ravenous beasts just long enough that he could escape.

3 This no-nonsense solution to our immigration problem would have the dual benefit of slowly reducing our population of illegals to the point where we could initiate Project Garbanzo Bean, in which we track sales of garbanzo beans at supermarkets across the nation. By setting up death squads outside of the locations with the largest volumes of garbanzo bean sales, we could ambush and apprehend illegals as they head toward their turnip carts with their dinner supplies.