As the mass slaughters of unarmed citizens by madmen in Wisconsin and Colorado recently reminded us, our nation is facing a catastrophe of epic proportions. Simply put, there are not nearly enough guns in America. When a theater full of so-called Americans shows up to watch an imaginary superhero kick ass, prepared to live the creed of vigilantism vicariously but incapable of stopping crimes in progress, then clearly we have failed in honoring our Second Amendment obligations.

Meanwhile, a seemingly unrelated crisis is topping the levies of entitlement sanity in Washington. As Mitt Romney pointed out in his first debate with Heir Obama, the number of Americans on food stamps has increased from 32 million to 47 million under the current presidential regime. Given the force with which Mr. Romney was castigated for his earlier remark that 47 percent of Americans are beholden to government assistance, you would have thought that he had suggested outlawing brunch. In reality, this truth-teller was stating the obvious: the numbers of our citizens relying on government to pay their supermarket bills long ago spiraled out of control.

So, our problems are clear: too many food stamps, not enough guns. While these issues may seem unrelated to some, the visionaries at APMAG have drawn a clear line between the two, and hereby propose the Guns for Food Stamps Program. The premise is simple. Rather than distributing food stamps to millions of hearty, able-bodied Americans, they are simply given guns instead. They can then track, slaughter and prepare their own food. The basic cycle of Guns for Food Stamps is demonstrated in the diagram below:

The Guns for Food Stamps Program solves multiple problems simultaneously: 1) it spreads the joy of Second Amendment freedoms to ever-more Americans; 2) it rids the government of another burdensome entitlement and builds the sort of self-sufficiency at the heart of the American national character that is lacking in so many; 3) it liberates Americans from the oppression of meddlesome government food safety regulations; 4) it taps into America’s natural bounty; 5) it rids the landscape of vermin.

1. APMAG’s constitutional scholars have conducted extensive research that clears up common misconceptions about the Founding Fathers’ exact intent in their drafting of the Second Amendment. While many have interpreted the Bill of Rights to simply protect American’s right to bear arms, a close reading of the document reveals that it is much more far-reaching:

2. From the Pilgrims who landed at Plymouth Rock to the pioneers who pushed through the Oregon Trail to the Pacific Coast, the American people have shown an uncommon self-sufficiency, but this bedrock national attribute has been threatened by the preponderance of people relying on the government. Whereas government assistance was at one time sought only by those truly in need, this sense of honor has eroded like America’s global standing in the face of President Obama’s impotent foreign policy, and millions who are perfectly capable of providing for themselves have been rushing to the government with their palms spread wide. Simply see this recent photograph of people waiting in line outside of a food stamp distribution facility in Sacramento to verify that most Americans who use food stamps would do just fine without them:

Note: The wiseguy driving the chariot actually showed up to request food stamps for his unicorn.1

3. Part of the reason that food has grown too outrageously expensive for our poorest citizens is Congress’ relentless over-regulation of the industries that grow, process, package and ship our groceries. Where free market forces should and could dictate manufacturers’ actions and consumers’ choices, we are instead mired in a hodgepodge of unreadable ingredient labels,2 sky-high wage requirements for workers at every stage of food production, and meddlesome government inspectors beating down the farmhouse doors to make sure we read each cow a bedtime story before shutting the barn for the evening. One need only glance at this photo of a pig living in government-mandated, minimum-standard housing in Iowa to see how out of control our regulatory environment has become:

If citizens are given the means to simply slaughter their own food, we will also be empowering them to sidestep this onerous machinery of government interference.

4. Some hybrid-driving pansies will no doubt argue that there are simply not enough wild animals in the United States to sustainably feed the entire population of more than 300 million people. Nonsense. One need only see this recent3 photo of the endless herds of bison roaming the Great Plains to remember that our nation’s natural bounty is limitless: 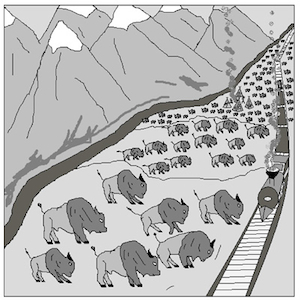 5. The American landscape is practically over-run with vermin, such as opossums, cottontail rabbits, whitetail deer and timberwolves. Yes, carrot-eating wuss people often include wolves on their list of “endangered species,” citing the “necessary role of apex predators in a properly functioning ecosystem.” But as any4 scientist will tell you, wolves are no more beneficent to our environment than falling meteorites. To understand the full destructive power of these vicious animals, ask a rancher how many of his livestock wolves have eaten in the past year, or, better yet, take a look at the surveillance footage below of a pack of gray wolves robbing a Wyoming bank: 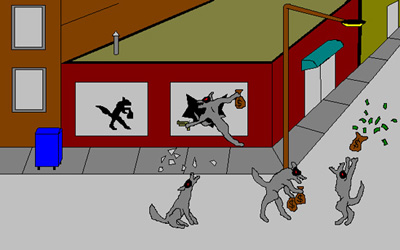 The myopic left-wing political establishment will likely ignore this proposal as they have dismissed APMAG’s past common-sense reaffirmations of Second Amendment freedoms such as the Affordable Handguns Act, our Tanks for Clunkers program, and the Aliens Versus Predators Prevention Act, which would have armed average citizens with an arsenal of anti-alien weaponry, because believe me that shit could happen for real and we better be prepared when it does.

The choice is clear: continue to simply hand out free food as though America were one vast all-you-can-eat buffet, or urge a return to our hardy, self-sufficient roots by giving all citizens the means to cleanse the woods of wild animals and put them on our dinner tables, where they belong.

1 The government granted his request.

2 And, honestly, who cares? If this stuff wasn’t safe, does anyone honestly believe it would be in our food to begin with?

3 While this photo was taken in 1871, that is relatively recent when considering that the Earth itself is nearly 6,000 years old.

4 No scientist will tell you this.