As you read this, “President” Obama and his Congressional cronies are busy piecing together an absurd far-left wish list of giveaways and capitulations disguised as comprehensive immigration reform. If Señor Obama has his way, a no-questions-asked free ride to citizenship for 11 million illegal felons will soon become the law of the land formerly known as the United States of America.

Do not be fooled. Packaged and sold to the American people as a pragmatic and necessary step to resolving our long-simmering debate over out-of-control illegal immigration, this bill is nothing more than a grand plot by a desperate group of Democrats to secure a permanent electoral majority, so they can run the Constitution through the paper shredder and impose their brand of imperialistic socialism upon the world.

Obama is building his bill on the irrational and long-disproven myth of immigrant benevolence, peddled by a left-wing media bent on ignoring the relentless decades-long crime spree that has left our border towns a veritable disaster area emptied completely of ancestral Americans1. While liberal apologists have been doing the Mexican hat dance around this killing spree, inventing2 statistics that claim illegal immigrants post crime rates lower than those of the U.S. population at large, anyone who has ever been in the room with an illegal immigrant knows that this is simply untrue. As a rule3, they lie, steal, assault, rape and kill anyone in their sights. Just take a look at this young Guatemalan man delivering a pizza to a home in suburban Atlanta last week: 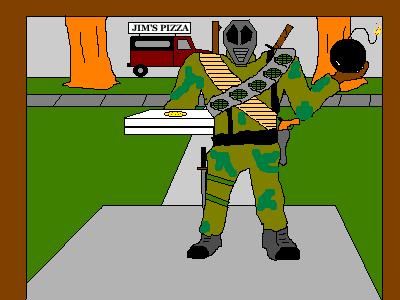 One of the most shameful elements of the liberals’ pro-immigrant apology tour has been their relentless drive to redefine the nature of crime itself, primarily by recasting the unforgivable felony of sneaking into our country as some sort of shoulder-shrugging misdemeanor, no more serious than jaywalking or banning minorities from voting. These haughty peddlers of immigrant aww-shucks-ism may be surprised to see this fragment of a stone tablet found recently in a Middle Eastern desert, which is thought to spell out the long-lost 11th Commandment: 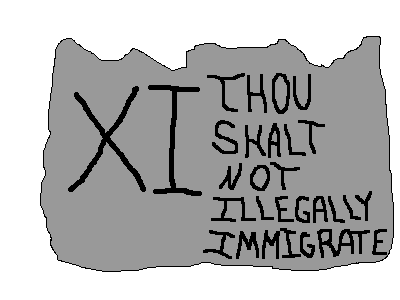 Those naïve enough to ignore the Lord’s commands and buy illegals’ sob story that they are victims of social and economic forces beyond their control, desperate to create a better life than they could have in the poverty-stricken pinto bean belt of Latin America, need only look at the photo below of a Mexican woman in Mississippi feasting on the corpse of her aborted fetus: 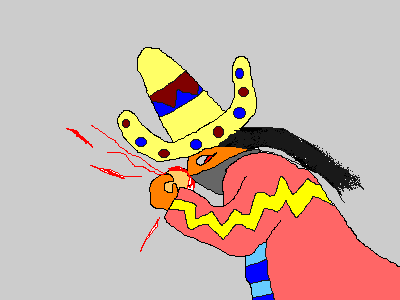 It does not help those of us in favor of rational immigration policy that the sentimental left has relentlessly romanticized the immigrant by dragging up some imaginary past, referring to the so-called “melting pot,” a fantasyland of diversity from which our ancestors collectively sprang. They point to the waves of German, Italian, Irish and Polish immigrants who poured through Ellis Island and, given time, assimilated across the vast plains and cities of America.

Rubbish. The truth is that, wherever those ancient Americans came from, they assimilated instantly as a matter of course. It is a well-known fact4 that anyone who could not achieve fluency in English by the time they reached the Atlantic seaboard was unceremoniously tossed into the ocean, which you can clearly see from this photo of an unfortunate Italian immigrant off the coast of South Carolina in 18955: 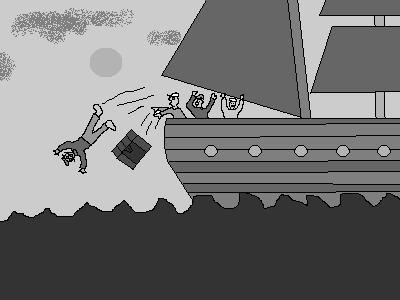 Yet liberals continue with the laughable assertion that these predominantly south-of-the-border illegals will similarly assimilate if given time. A quick skim of this text book cover, from a civics classroom at a predominantly immigrant school in South Texas, demonstrates that this outlaw culture has absolutely no intention of doing any such thing: 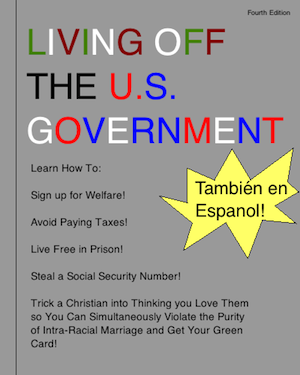 Finally, we come to the flimsiest left-wing fantasy yet: between amped-up enforcement from the Obama politburo and the advent of the Great Recession, with its concomitant hit on the service economy, the flow of illegals from south of the border has slowed significantly enough that we no longer need to make a blockade on further immigration a priority. Nonsense. Those of you who believe that illegal immigration has stalled can explain the photograph below, taken recently near the Arizona border, which shows what is clearly men dressed up in a horse costume waiting to enter the U.S. in a line of actual horses: 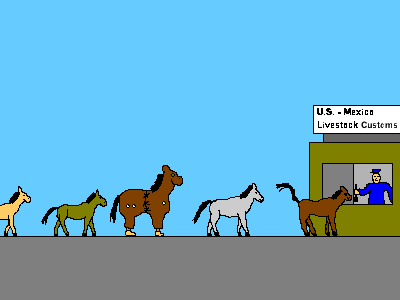 Enough. These hordes of human locusts are here to devour our every resource, from free education to jobs to the English language, invented here in America as a statement of independence against our original British oppressors.

There is a better way than capitulation to deal with this miscreant band of illiterate criminals, and it does not involve mass mailings of social security cards of complete abdication of our core principles. I present the APMAG Illegal Aliens Reduction Act of 2013. There are three principal sections of this bill: getting immigrants out, keeping immigrants out, and reclaiming America.

1. Getting immigrants out. Any reasonable immigration plan must begin with the non-negotiable declaration that all illegals have to go. Fortunately, we have at our disposal the most effective fighting machine in the history of the world to carry out this mission: the U.S. military.

With Obama’s criminal and premature declaration that the U.S. armed forces wind down the war in Afghanistan, our military readiness is set to suffer a severe collapse. Rather than letting our soldiers’ skills atrophy and our materiel rot, we must repurpose these weapons and personnel for a domestic eradication of illegals.

By declaring war on these snarling embodiments of Satan’s wet dreams, we can treat them like the war criminals that they basically are, and once they are dislodged from their prairie dog holes, we can route them through tribunals en route to their homes in Mexico. Those who we cannot pry from their bunkers will simply be eviscerated through a three-pronged attack involving fighter jets, intercontinental ballistic missiles and helicopter gunships.

2. Keeping immigrants out. While the Obama cartel has—somewhat miraculously, given its preoccupations with stealing our guns and destroying our economy—nearly doubled the dollars spent on border enforcement, immigrants are still pouring into our nation like liberal voters to a government health clinic. One need only take a look at this diagram picked up from a coyote’s satchel in the New Mexico desert last year, depicting a series of underground tunnels leading from Mexico directly into the kitchens of fast food restaurants around Nevada, to know that the criminal infrastructure of law-dodging freedom poachers is well established: 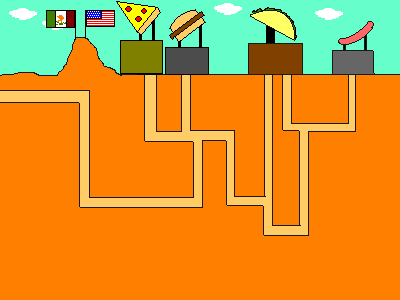 To stop the stream of illegals once and for all, APMAG proposes an unscaleable fortress-like wall, something on the order of the Great Wall of China, only way more fucking asskicking because it will be the Great Wall of Motherfucking America. Eschewing union labor and instead accessing a fleet of market-rate day-laborers6 via the barely regulated private sector, we will construct this barrier not just along the border states of California, Arizona, New Mexico and Texas, but also along our coastal borders and the long-problematic 49th and 45th parallels that we share with Canada. Those who don’t see the need for a stronger border to hold back our northern neighbors should take a look at this recent picture of a gay Canadian couple’s disgusting display of public affection while honeymooning in Idaho’s Sun Valley: 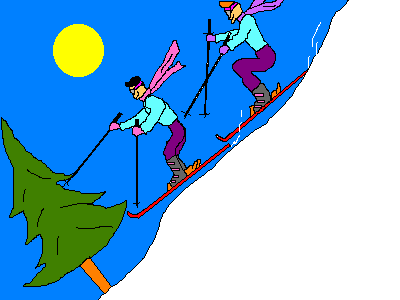 3. Reclaiming America. Once the illegals are gone back to their adobe Rivieras, we will have to focus on retaking America. That will mean, first of all, the purging of all south-of-the-border cultural imports, such as Taco Bell, Ricky Martin and Islam.

With illegals safely shipped back to their homelands, Americans could at long last focus on the urgent priorities of impeaching President Obama, further deregulating financial markets and expanding use of the death penalty. Given the slow landslide into liberal purgatory we have been undergoing since 2009, I wouldn’t count on it.

1 “Ancestral American” is here understood to mean those who emigrated from Western Europe between the 17th and 20th centuries.

2 “Inventing” is here understood to mean “analyzing data and producing a conclusion.”

3 “As a rule” is based primarily upon the opinions of writers of far-right anti-immigration blogs.

4 Again, “fact” means “statement most convenient to my current argument.”

5 Liberal worry-warts will be relieved to know that the Italian man survived, paddling to shore while clinging to his trunk. He of course went on to live the reckless and vile life one would expect of an illegal, organizing labor unions, exposing food safety violations at early canneries, and eating farm-raised, organic food.

6 These will probably be illegal immigrants.