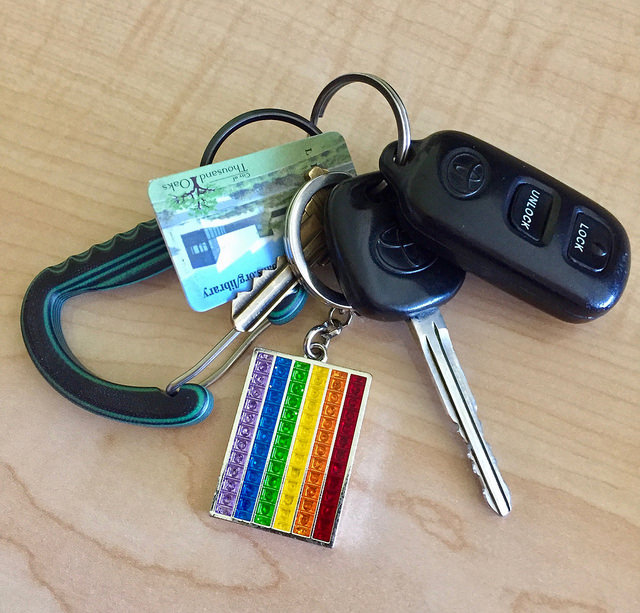 For years I had a pretty plain key ring. This was back when I still carried a purse, so it didn’t really matter what my keys looked like. No one ever saw them, and they floated around at the bottom of my bag, along with my pepper spray and loose pennies.

But this past winter, on my way back from visiting my grandparents for the holidays, I spotted this obnoxiously sparkly rainbow flag key tag at an LAX gift shop and for some reason was willing to lay down $9 plus tax to obtain it. I had heard somewhere that the self-respecting dykes of yore had taken pride in their key rings, and damn it, I was going to be one of them. It originally included a little metal plaque that read CALIFORNIA, which I removed with my teeth, because somehow that was more irritating than the fact that the entire thing was made of rhinestones and looked like its target audience was Perez Hilton.

I carry my keys on a carabiner now, so the rainbow flag clatters around at my hip all day. Although it’s painfully campy and often at odds with the look I try to cultivate, I enjoy how there’s now no mistaking who I am. I haven’t owned it long, but I think my flag’s going to stay with me for a while — or at the very least, until my carabiner wears out.