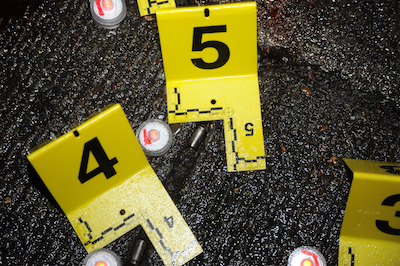 Bullet casings in the alley.

As we left off in Part 1, Ryder and I are in a coffee shop, and Ryder is describing the moment they called 911 from an alleyway outside The Twilight Exit. Ryder said the instant James’s gun went off, “I’d ducked around the corner. The phone was dialing, dialing, dialing. I heard a couple more shots inside. People were streaming out. I was trying to direct them, ushering them to the front entrance. Then I realized I was really exposed where I was standing, so I began backing towards the mini-market next door. All this was happening while I was waiting for the operator to pick up. When she answered, two cop cars came barreling down the road while I was on the phone with her. Their response time was shockingly fast. It absolutely floored me.”

Ryder watched from the store’s entrance as “the cops came running around the corner with their guns drawn and then filed into line. Seeing so many cops was definitely freaky. It was a trigger for me.”

“What was going on with you?” I said.

“I was honestly more worried about what the cops were doing than what James was doing. I’d seen his energy and his dynamics. I knew he was unsure and scared, and he wasn’t wanting to shoot up a bunch of victims. And also, I knew the cops didn’t know any of this, and things would probably get incredibly violent very quickly,” said Ryder.

Bracing for the police’s intervention stirred heavy feelings inside Ryder. “At the time, I was starting to come out from being emotionally stuck. For a couple years, I could barely socialize. Things had gone gray-green for a while,” they said. Ryder’s former work position required them to deal with tragedy every day, and this had become overwhelming. “My job was giving me a lot of trauma, so I’d left. A few months later, John T. Williams was shot.”

I know this name. I marched in a protest on John’s behalf. What happened to him was spectacularly upsetting. It was a huge story, and though it occurred back in 2010, I still feel John’s presence everywhere. Today even, as I was jogging through a park, I saw his picture on a flier taped to a telephone pole.

“John had been one of my clients,” continued Ryder. “I knew him really well for five years. I saw him every day. His room was across the hallway from my office. He’d always come out with a new carving. We’d share craft ideas. He was a story-telling mentor to me.”

I tell Ryder I’m sorry for their loss. My understanding of the case comes from Seattle Times and Seattle Post-Intelligencer articles. John had been crossing a street downtown while carrying a three-inch single-blade pocketknife and a scrap of wood when Officer Ian Birk of the Seattle Police Department (SPD) pulled up, emerged from his patrol car, and repeatedly demanded that John drop the knife. John didn’t respond, although the exchange took less than six seconds, and then Ian shot John four times. It was later revealed that John had hearing difficulties and struggled with chronic drinking problems. The pattern of John’s bullet wounds suggested he was beginning to turn towards Ian when Ian fired. John had been a seventh-generation First Nations woodcarver. He died on the sidewalk. His knife was later discovered folded into its closed position.

The story gets worse. Ian was put on paid administrative leave following the shooting. His testimony in the King County inquest contained inconsistencies. The Firearms Review Commission determined the shooting was unjustified, and soon after, Ian resigned from the police department. Other than that, nothing really happened to him. Prosecutors determined state law prevented them from charging Ian with murder or manslaughter charges. That’s because of how the law is written. It requires proof that Ian acted with malicious intent, and there’s really no way to prove what someone’s thinking. Also, a Department of Justice investigation had recently concluded that SPD had a pattern and practice of using unconstitutionally excessive force, so prosecutors were concerned Ian would cite the department’s inadequacies to boost his defense. “Basically, he would’ve been able to claim that he was trained to fear for his life when no real threat existed,” Seattle attorney Tim Ford told Mike Carter of the Seattle Times. The City of Seattle eventually paid John’s family a settlement of $1.5 million. Who knows what Ian’s doing now. Probably he’s living in exile somewhere. A basic search for him on social-media sites brought me no leads.

Back to the Twilight shooting. The night was cold and wet, and after all the witnesses had fled outside, the cops gathered us to wait inside a heated city bus before it carted us to the police station. “So many of the cops that night were white and stocky, with a black stocking cap and shaved head, just like Ian,” says Ryder. “I got on the bus, and it was like being stuck in a bus with seven Ian Birks. I had this automatic response. I couldn’t stop processing. I was noting the exits. I knew where everybody was at every moment. My adrenaline was spiking. I kept seeing Ian and Ian and Ian. ”

“I know I’d put myself in that situation by getting on the bus. But I felt obligated to give a report and speak to the official narrative. I could tell they were going to paint it into a Sandy-Hook scenario, and I wanted to do my part to stop that,” said Ryder.

The barista arrives at our table and presents us with a pair of gluten-free, vegan, organic, locally sourced cookies we can have for free because it’s the end of the day and they didn’t sell. I look at Ryder, and Ryder’s eyes sink into mine. For a moment, I consider Ryder, who is a fascinating stranger, and the only reason we’re together now is because I cold-called them after coming across their phone number in a police file.

“We’ve jumped ahead,” I said, after the barista had gone. “Let’s go back to the moment you’ve called 911. You’re by the store. You see the cops arrive and get into formation. What do you remember next?”

“Yeah. They’d gotten there so fast. I heard a tight cluster of shots. They gunned James down," said Ryder. "The police were an integral part of the violence that occurred. I was the first to call them, so I had a lot of guilt around that for a long time.”