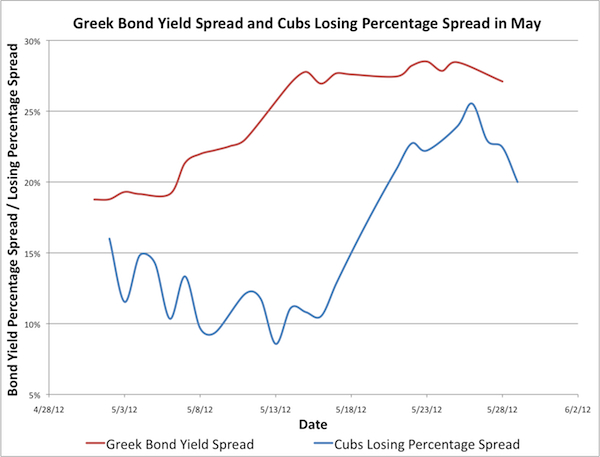 There’s a good chance Greece will exit the Eurozone. Spain too. And possibly Portugal. Also, maybe Italy. Clearly, these are not happy days for the embattled European monetary union. But while Greeks and Europeans fret over the fallout of dismantling the Euro, Chicago sports fans are at least as concerned over their own team’s precipitous fall from already modest heights. Though many in the media are reticent on the subject, the fact that the Cubs lost seventeen of twenty-six games in May and are the sad owners of a losing percentage that places them comfortably in the cellar of the NL Central is an unmistakable harbinger of bad baseball news. With this sort of record, the once laughably ridiculous doomsday scenario has suddenly become the terrifyingly plausible: the Chicago Cubs may exit the NL Central.

Unlike the Greeks, Cubs fans aren’t yet marching in the street demanding leadership changes. After all, first-year President of Baseball Operations Theo Epstein has hardly had a chance to right the careening ship that hasn’t had a cohesive bearing since Barack Obama was an ambitious Illinois senator and the Cubbies managed to get swept in the NLDS despite winning 97 regular season games. Like Obama, Epstein came into his position burdened by unreasonably lofty expectations, and if the Cubs experience anything less than a Cronenberg-esque metamorphosis from cupcake to juggernaut, his tenure will be seen as yet another disappointment for the pathologically hard-luck franchise. Thus far, fans have mostly curbed their animosity, but as the team’s losing percentage increases from bad to unspeakably bad, that goodwill is sure to shrink faster than Greek bank deposits; a radical change may be in order.

This radical change may look similar to what Greece is likely to experience over the coming weeks. As the country’s bond yield spread widens to an stomach-churningly high 29.96%, signaling the market’s utter lack of confidence in Greece’s prospects, the government will have an even more difficult time borrowing the money it needs to merely keep the lights on. Because Greece cannot print more Euros whenever it runs out of them, the country will be forced to abandon the currency and return to their own, the drachma. A cursory Google search for “Euro catastrophe” will fill you in on why many economists aren’t particularly excited about this possibility.

And what of the Cubs? Well, just as Greek bond yields have increased relative to the strong German bund, so too has the Cubs loss percentage increased relative to the NL Central division leading Cincinnati Reds. The Cubs losing percentage spread now stands at 20% and bears an uncanny resemblance to the trajectory of Greece’s bond yield spread. The chart above clearly shows the two indicators rising in tandem at a frightening velocity. The truth is, because both the Cubs and Greece are getting worse at such an aggressive rate, it will soon no longer make sense for either of them to honor their current affiliations.

There is but one option left: lest the Cubs continue this season and subsequent rebuilding years winning only a paltry number of games, the team must leave the NL Central now. Once your heart rate returns to a reasonable level, hear me out: the Cubs need new talent, and the process of acquiring new talent takes time. The club can either spend this time losing a prodigious number of games, or it can drop out of the NL Central and rebuild while maintaining a modicum of self-respect.

Fine, you say, but if not the NL Central, where would the Cubs play? Perhaps nowhere. As Cubs fans know, there’s always next year, and the team could simply sit out a couple seasons and attempt to return to the division whenever their talent pool reaches professional levels. Or perhaps the Cubs could even form a new division with other basement-dwelling teams such as the San Diego Padres and Minnesota Twins. In this new division, the Cubs would stand a chance of winning more than a third of their games and the reduced sense of shame would be a breath of fresh air for fans whose eyes have become accustomed to look for their team at the bottom of the standings. To ensure the Cubs never finish in last place, a middling minor league team may be allowed to join the division as long as they promise not to try very hard.

Leaving the Euro won’t make Greece any more popular with other Eurozone countries and, indeed, many Greeks. Likewise, leaving the NL Central won’t make the Cubs popular with just about anybody. However, facts are facts, and the facts are that the Cubs status in the NL Central will not significantly improve in the foreseeable future. The Cubs are a horrific fourteen games under .500 and eleven games out of first place in what can only charitably be called a ho-hum division. Hell, the Cubs are four games out of second-to-last place. So, sure, the Cubs could stay in the NL Central and continue their role as a win-factory for other division members. I’m sure the Reds and Cards won’t mind. But the prudent step for the Cubs is to do what Greece will end up doing: drop out and rebuild on their own terms.