I take a lot of photos while traveling, many of which are poorly composed and touristy, and sometimes, likely to the irritation of some, they are photographs of food, namely sandwiches and sandwich-type street foods. But no photo I have ever casually posted to Facebook causes quite the rage as this one: 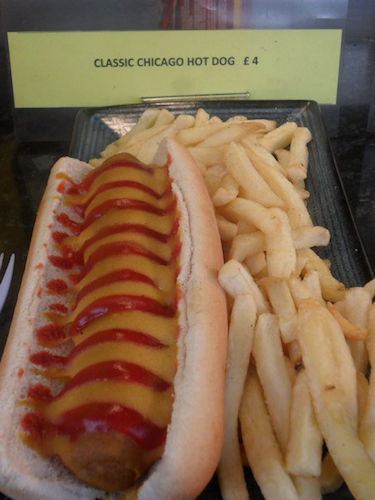 A food stand in London’s Camden Market was advertising “Chicago Hot Dogs,” which, as any self-respecting omnivorous Chicagoan will attest, must not, lest the world fall off its axis, come with ketchup. At one of the most famous tourist sausage-slinging shacks, the legendary Superdawg, the carhops who serve the food will not put ketchup on anything. They will bring it to you—oh, they will bring you that bottle of ketchup—but they will not anoint your Kosher beef link with sugary red paste, lest they lose all credibility. When Vienna Beef Senior VP Bob Schwartz wrote his Chicago hot dog travelogue, he called it Never Put Ketchup On A Hot Dog. Even President Obama has gone on the record in support of Chicago hot dog purists.

I’m not sure what the city ordinance is regarding ketchup, but I’ve maintained that those who put ketchup on a Chicago-style hot dog are met with one of a number of horrific, garish fates in the afterlife, among them a) sport pepper juice to the eyes, b) being forced to listen to Chicago’s “Look Away” on repeat for all eternity or c) having their eyes pried open, A Clockwork Orange-style, and forced to watch reruns of the Green Bay Packers’ victorious Super Bowl performances.

So this photo of this offending sausage, in its stripy blanket of ketchup and what is either mustard or a synthetic nacho cheese sauce (not really sure which), naturally sparked some vitriol, most notably from my friend Evan, a proud Windy City native who has dedicated far too much time and money since moving to Columbia, Missouri towards looking for sport peppers and celery salt (two fundamental ingredients to the “true” Chicago-style hot dog) (“FOR FUCK’S SAKE,” he wrote authoritatively, “THAT’S NOT EVEN A POPPYSEED BUN.”)

But I realized something: the civic disdain for the ketchup-slathered ‘dog is something I just grew up accepting, never really questioning its origin. Where did the ketchup-hate come from, did other sandwich-loving cities impose similar restrictions and what does it all mean for us? The first of these questions generates quite a few common answers from the smallest bit of internet prodding, ranging from the food-science defense (the ketchup’s over-sweetness drowns out the natural flavors of the sausage, whereas mustard complements them) to the more plainspoken (“Dude, ketchup is gross, bro”). There’s also the historical explanation: ketchup was not present in the original incarnation of the Maxwell Street vendors, so why mess with tradition?

Other great sandwich cities have their own debates regarding taboo sandwich ingredients. In Philadelphia, which Saveur recently named America’s Sandwich Capital, the cheesesteak is sacred. Although there don’t seem to be any absolutes in terms of what can and can’t go on a cheesesteak, some ingredients are up for debate. The one met with the most revulsion is mayonnaise, and fair enough. South Street Steaks in Maryland refuses to put mayonnaise on their cheesesteaks, but seeing as they’re outside of Philly, I’m not sure how much stake they have in the steak debate.

Primanti Brothers in Pittsburgh, arguably one of the greatest sandwich shops on the continent, has no absolute doctrines, but ordering french fries on the side instead of inside the big, meaty hull of the Primanti sandwich itself is, as is my understanding, generally frowned upon. As for New York, a sandwich epicenter in its own right, it seems as though there’s some sacred charter deep within the city vaults dictating the exact thickness for sliced pastrami.

Although often the rules are in place for the most effective possible enjoyment, the enjoyment of a sandwich or a sausage-bun-type situation should not be bogged down by doctrine. A Primanti Brothers gut bomb is best enjoyed, they say, with the fries inside; a Chicago dog with the sweetness of neon relish and the mustard and sports peppers slam-dances into your taste buds. But regardless of what the consensus is, it’s the discourse about taboo ingredients that is the important bit.

Ultimately, my friend’s rage upon seeing this photo is, in the larger scheme of things, overblown. The vendors in Camden Market know not what they do, and surely there are wiser uses of our ire. But I think I understand where it comes from. And for those of us who come from hometowns that instill us with swelling joy and occasional smug pride, well, it’s easy to jump to the defense of tradition, of whatever strict civic loyalties suggest is The Constant Way. I think—and might be very, very wrong on this—that Chicagoans mostly just enjoy the act of debating the hot dog issue and lambasting those misguided souls who reach for the Red Menace.

There are also the deeper currents: the Chicago hot dog has its roots in a time of economic depression, as a working-class staple, a way to create a banquet out of nothing, assembled by the skillful hands of Eastern European immigrants who have held its Kosher legacy. And other cities, too, have these same tropes: the rich family tale of arrival in America and thriving on reinvented recipes from the Old Country, the rise from neighborhood epicenter to city and national staple. The stories are every bit as wonderful as the sandwiches they produce, so it’s only natural some people get a little bit overprotective. It’s been said that smell is the strongest sense tied to long-term memory, but taste has got to be a close second.