Among the guns I own is a Ruger .22 rifle. It’s a fine machine with a wooden stock instead of resin, and because I’m a customizing enthusiast, it also has a factory made 25-round magazine that turns the little semi-automatic carbine into what can now be technically labeled an assault rifle.

This is a ludicrous definition. The rifle is just a lowly .22, one step up from a BB gun, and only a fool with a death wish would carry it into battle to lead an assault. But the gun still walks a fine line regarding the boundaries my wife has set for the firearms that can, and can’t be in our house.

She understands that we can’t just go to sleep at night pretending we live in a world where people receive hugs and flowers from strangers simply for smiling and having good manners. The monthly crime map in our local paper proves otherwise. With its green dots and blue stars and red triangles and yellow squares, we can see the concentrations of armed assaults, burglaries, car thefts, home invasions, rapes, robberies, and (thankfully infrequent) murders. And we live in a safe town.

No one in their right mind can watch these shapes on the map—these “insidious Attacks of small Parties of skulking Murderers” that Benjamin Franklin once described—advance each month and feel no instinctive inclinations toward self-preservation.

Sure, there are movies where the heroes, knowing that they’re about to be overrun and outnumbered by aliens, zombies, or mobs suddenly go all Zen and bow their heads, close their eyes, slow their breath, bravely accepting the inevitable with nobility and grace. Owning a home in the middle of a steadily encroaching crime zone is not like that. You prepare to defend the things you have and the people you love, or you move away and hope for better in the new location.

Most people can’t easily do the latter, so the former becomes the more feasible option.

But Jesus, not with a military rifle.

Honestly, if it comes down to needing to spray the house with .223 rounds because armies of invaders are attacking, then the war for defense of stuff and family is already lost. Armageddon has arrived and the four horsemen are racing across the sky on their ghostly steeds. Or, you live in Sarajevo or Rwanda during the horrors of an ethnic cleansing campaign. If that’s the case, then by all means take out as many of them as you can before they get you.

But if you’re a gundamentalist who lives in a subdivision called Whispering Meadows or Forest Glen, it’s time to get over the pathetic fantasies. You’re not Rambo or John McClane, and those three teenaged burglars in your garage aren’t the Afghan army or a band of Scandinavian terrorists. And if the first thing you reach for when you hear a window break is an AR and you shout like Tony Montana, “Say hello to my little friend!” remember before you start spraying bullets that only two sheets of half-inch drywall separate your bedroom from your children’s.

On the other hand, for gun owners who genuinely think that the AR has features that make it a superior hunting rifle, Remington makes a limited-capacity version to take into the woods. For those who think it’s great fun at the outdoor range, then by all means go and shoot fifty-cent rounds at targets. One 30-round magazine for $15. Six mags for $90. Easy on that trigger—it’s expensive!

But for politicians and NRA representatives fantasizing about a single mother with her babies in one arm and an AR in the other, shooting the big gun single-handedly while “fending off multiple attackers”? Way too many movies, not to mention some seriously warped fantasies of Amazon mamas packing heat.

It drives gundamentalists crazy to hear military rifles being discussed by public figures who don’t know what they’re saying. Rev. Jesse Jackson, for example, has weighed in on the matter with this: “Semi-automatic weapons are not just about gun control, they’re about national security. You know that these weapons can shoot down airplanes, they can blow up railroads. This is really a whole national security issue.”

In fairness to the minister, it’s true that military style semi-autos can be decked out in so many wicked-looking accessories that they sure do look as if they could bring down an airplane. But they can’t, unless we’re talking about a low-flying single engine civilian plane, or a plastic model of a Boeing hanging by a string from a tree branch.

The Armalite Rifle (AR) 15 is a semi-automatic version of the military’s fully automatic M16. One is clearly a military assault rifle and the other is clearly only a modern sporting rifle for civilians. And this explains why the two are clearly separate weapons, as shown by this book cover: 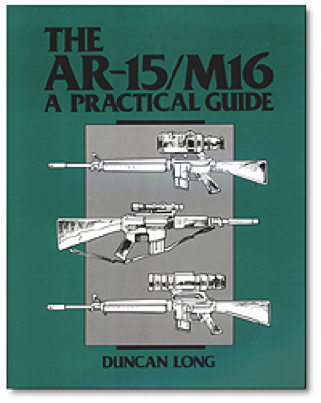 That slash between “AR-15” and “M16” reads to me as and/or. And for some reason, the word interchangeable comes to mind. But who wants to get all picky about small details like those?

Besides, I really have no dog in this fight. Never owned a military-style rifle, never wanted to have one, wouldn’t sacrifice my marriage to get one. At times, I confess, I’ve even leaned toward the “I like guns but not that gun, so I don’t care if that one goes away” attitude, which is groundless and unsupportable.

But checking myself for flawed arguments doesn’t mean that I automatically break out the credit card and start donating wild amounts of support to the NRA. It means that I turn to people whom I respect because they have the first-hand ethos to speak on the subject with authority. A longtime friend, an Army Major who has that authority by the Humvee-load after three tours in Iraq and who now trains those who provide military training overseas, puts it this way:

“AR-15s are for killers, for trained and lethal soldiers. The AR-15 is not a weapon for recreational use. Maybe to play with, at a tightly regulated gun range where you can rent them to be used and returned in the same afternoon, but otherwise that “AR for civilian use” shit is ridiculous. Too many people who own them lack the training to use them. And too many of those untrained people are obsessed with the AR and have the potential to become outlaws and vigilantes because of the obsession. I’m afraid to come back to the States!”

Even with that testimony, the last thing I would tell someone else is that they don’t need a certain kind of firearm. I’d have zero credibility, given that I don’t need a single one of mine. But military rifles are impractical, overpriced, overpowered, bankrupting to shoot and maintain, and visually terrifying to tens of millions of fellow citizens. Pretending that these five strikes are somehow desirable is just illogical, and leaves the owner with pretty much one defense:

I suppose civil wars have been waged for less than that.