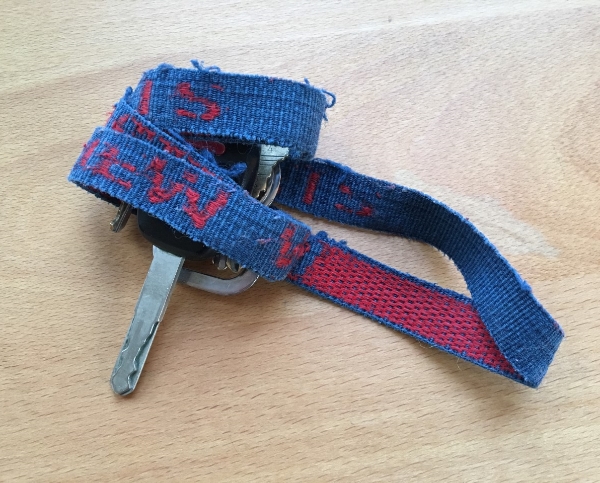 I am not sure how long I’ve had this lanyard attached to my keys, but it has to be at least 20 years. In fact, I cannot remember ever carrying keys without it.

When unfurled, it has text running along its length. The lettering, now tattered to the point of near-illegibility, reads “Westview Wildcats,” a reference to Westview High School in Beaverton, Oregon, where my grandmother was a math teacher for many years. She must have gotten it as a staff giveaway and then given it to me during one of her visits. She has since retired and moved to Florida. I showed the lanyard to her over this past Thanksgiving and she had no recollection of having given it to me.

The lanyard is a little over 16 inches long and about three-quarters of an inch wide. It has become pretty beaten up over the years. The texture of the frayed fabric is rough and worn in, like a good baseball glove. I usually wrap it around my keys, forming a gentle cocoon that keeps the keys secure in my pocket, inhibits movement or jangling, and prevents the sharp edges from scraping against my thigh.

Despite its increasingly tattered state, I cannot imagine replacing it. For one thing, I am too used to it. For another, I’ve grown sincerely fond of the lanyard — not in spite of its ugliness, but because of it. It has quietly and reliably weathered every storm, sustained its battle scars, and earned its place.