Nonetheless, I now speak in that tone, without affect or personal inflection. I use that tone to tell you, I’m mildly excited/happy about skateboarding being in the Olympics.

But, my views have been steadily evolving. I used to be cautiously optimistic about skateboarding being in the Olympics.

Here’s the bottom line, folks: I come from a generation of skaters that found in skating a refuge from conventional society, respite from an unhappy home life, a democratic activity open to all.

My fellow Americans, like many U.S. persons and non-residents, I have watched skateboarding gain unprecedented popularity with a mixture of shock and awe.

I firmly believe, at least for now, skateboarding is still a subculture that celebrates eccentricity, and the Olympics will not fundamentally change that fact.

Here’s a compelling personal narrative to illustrate that point. It doesn’t have a title. The most accurate title would be THE TIME I SAW JASON DILL, AND TALKED TO HIM.

If you know skating, this may sound like personal myth-making, or “name-dropping,” or utterly unearned pretension.

If you don’t know skating, you’ll find the previous disclaimer preposterous, and you’ll find it very easy to believe I had a very long conversation with veteran pro skater Jason Dill at a skateboarding contest, called Street League.

Street League, you should know, is put on by Rob Dyrdek.

Technically, Dyrdek and Dill — at that time — were teammates on an Ohio-based company called Alien Workshop.

Clumsy promotional materials for the gripping nonfiction narrative would inevitably feature a title like TEAM OF RIVALS: DILL, DYRDEK AND THE EPIC BATTLE FOR SKATEBOARDING’S RADICAL SOUL.

But there never was a formal argument between these two charismatics — let alone a fight — which makes dramatizing their stark differences difficult.

I shall swiftly delineate them, while glossing over so many subtleties, you would think I was being paid by the number of nuances I ignored, rather than by word-count.

Dyrdek — aside from Tony Hawk — is just about the most mainstream figure associated with skating, a global ambassador par excellence, an unabashed entrepreneur.

Dill, in contrast, aside from his truly influential skating, is quite the nonconformist.

He did a star turn as a long-term houseguest on The Osbournes, MTV’s reality television show, that documented Ozzy Osborne’s domestic life, and depicted Dill in all his glory.

Dyrdek has himself starred in several highly successful reality television programs: Rob and Big, The Fantasy Factory, and Ridiculousness.

Yet, one could credibly say: Dill and Dyrdek personify two sides of skateboarding’s eternal debate: “mainstream vs. core.”

That day at Street League was a case in point.

I saw Dill in the distance. He was sitting alone. Empty seats surrounded him.

Hours before the telecast that he would not be participating in, he’s wearing: a black V-neck t-shirt that says SUPREME at the plunging neckline’s point, skinny jeans, low-top Vans sans socks, sunglasses indoors.

Down below: a skater arrives at the arena with entourage in tow.

Dyrdek was holding court, down there.

Dill rested his chin in the heel of his hand, like the tableau triggers contemplation.

If you don’t mind, please also regard the seating arrangement in this scene as allegorical.

Dill is sitting on the periphery.

Dyrdek, down below, is sitting front and center — in medias res.

For argument’s sake — on this day — allow that it looked like there was more energy moving towards the mainstream.

Covering a Street League contest for a mainstream news outlet — as I was that day — is mildly anxiety provoking if you’re a tough guy/a “tough cookie”/“manly man”/taciturn on the outside, but inside, secretly mildly allergic to numerical data. (Street League Skateboarding, or SLS, features an intricate scoring system called ISX.) (BTW: You have one hour after the contest to turn in a detailed recap/synopsis.)

With that deadline looming large — with this particular workday happily marrying relatively manageable anxiety/sheer terror to cresting cortisol-levels/avoidance behavior(s) — I had to take a much-needed breather outside the VIP area, which had a commanding view of a parking lot.

There was Jason Dill — THE JASON DILL!!! — smoking a cigarette, sitting on the concrete steps.

Here’s the highly compelling sentence that is sure to star in many a successful Hollywood pitch meeting: He and I had a relatively long, thoughtful conversation.

It was quite clear, from that conversation, that pro skaters also face professional uncertainties. Mr. Dill was still an “endemic” media darling. (Thrasher magazine had recently featured him on the cover.) But a theme was: Where do you want to be in five years?

Mr. Dill had recently attended a party hosted by the iconic 80s pro-skater Natas Kaupas. And he said that Kaupas looked good. The guests looked good. And he’d made retirement — the afterlife — look good.

One detected not dread, but uncertainty.

The mood was FIN DE SIÈCLE! THE END OF AN ERA! LOST TIME!

What is even more intriguing about this discussion was that this was months before Mr. Dill quit his longtime sponsor to start his own board brand, Fucking Awesome.

I didn’t know that he was going to do that then. And, I believe, neither did Dill.

He certainly didn’t know that his pet project was going to become a singular phenomenon, that a company that specialized in outré graphics, was going to resonate with a whole new generation of self-styled “misfits” and “rebels” and “outsiders.”

That day it seemed like mainstream skating had won.

The truth is: Skating always had plenty of room for radically different visions.

In skating’s house, there are many mansions.

You should never let its surprise twists and turns surprise you. 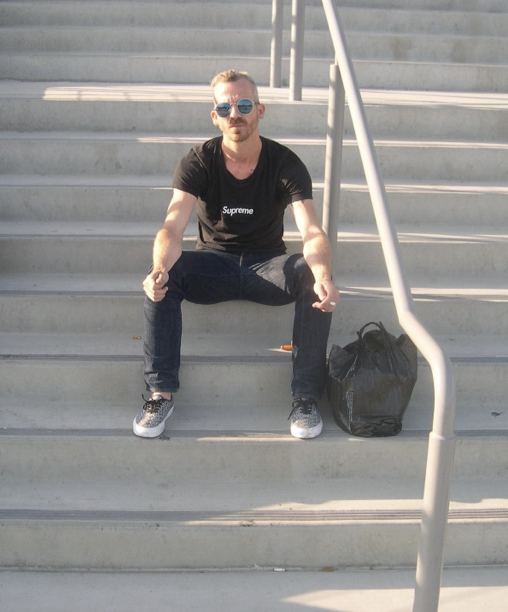 Now this story positively begs for a sentence emphasizing — overemphasizing — how Dill was poised to become a counterculture guru; calls for the subtle headlines one spies in the magazine aisle at CVS/Walgreen’s/Walmart:

THE RIDE OF HIS LIFE: HOW DID THIS MAN TURN AN INDUSTRY ON ITS HEAD?

HATERS GONNA HATE: HOW ONE MAN OVERCOME THE ODDS, SILENCED THE SKEPTICS, AND LAUNCHED THE HOTTEST/COOLEST COMPANY ON THE PLANET.

THE ODDFATHER: HOW THIS GUY MIGHT HAVE JUST REWRITTEN MARKETING 101…BY BREAKING EVERY RULE IN THE BOOK.

That chapter — in an already storied career — was in the near future, and no one knew it.

That day Mr. Dill basically talks about where he sees himself in five years.

That’s cold comfort on a hot day in SoCal.

Even those on pedestals can’t see that far into their own fates.

That said: He really lived up the legend.

When other skate industry players/media professionals showed up they said they’d known Dill had been in another skater’s car because he’d signed MARLON BRANDO on the dusty window with his fingertip. (Who does that?) (Thank goodness there are those that do!)

Fittingly, he ended the encounter on a theatrical note.

He stood at the top of the staircase and — framed against the sky — delivered a little extempore sermon.

God bless him, it was like he wanted to give the reporter something memorable.

“All the cool people are dead. The last cool person was Miles Davis. We live in a Hanna Montana-Odd Future-society. Don’t be nervous. You kill it,” he said.

And with that benediction — a blessing, by gosh — he vanished into the VIP section down below.