It’s a ritual as time-honored among teenagers as prom or ​drinking too much and​ crashing your parents’ ​Corolla into the window of a Mexican restaurant—glossy catalogs from colleges arriving by the dozen each spring. Aside from the faint odor of kiwi bubblegum vape smoke, Woodmont College’s catalog, Welcome to Woodmont, is superficially not unlike the others. But there’s no school quite like Woodmont College (no longer “university” due to a court order). And every page of its catalog is proof of this uniqueness, whether it’s ​t​outing the college’s low rate of scorpion infestation or celebrating its faculty’s various facial tattoos. The best part? You can order your own copy of Welcome to Woodmont and learn for yourself why U.S. News and World Report has hailed the school as “a singular educational experience for young people searching for neglect of the arts and aggression by townies.”

Comedy writers Mike Sacks and Jason Roeder are your guides to Woodmont College—its missteps, its glories, its unsupervised quicksand pits—and we’ll be sharing bonus content from this e-book all week long to help herald its publication.

A Woodmont College residence hall isn’t like any living situation you’ve been a part of—a little like home, a little like summer camp, a little like a doomed submarine that has struck a mine and has begun its final descent. That’s why you might be making some incorrect assumptions about what you should bring to campus. For example, you don’t need a microwave, as most Woodmont living spaces have at least one radiation “hot spot” that allows you to cook a burrito simply by holding it in the air. On the other hand, do pack a machete or reciprocating saw to cut through the thick roots that often burst through our dorm-room floors.

Here are some other items for your Woodmont checklist:

Noise-Canceling Headphones
With virtually no soundproofing in Woodmont residence halls, you’ll want a little cone of silence, particularly if you live directly above one of Woodmont’s poultry-processing facilities.

Artwork
Ninety-five percent of the wall space in your dorm room will be occupied by a series of irremovable portraits of founder Daniel Woodmont worriedly reading pamphlets about STIs. But you’ll still have four square inches to express yourself, which many students customize with a corner of a cool poster or a slice of a family photo.

Caffeine Pills
It’s no urban legend. At Woodmont, not only do students whose roommates die during the school year receive a 4.0 GPA, they’re also awarded custody of the corpse to then sell back to the family. We advise students to never, ever be the first one to fall asleep.

Condoms
Truth be told, while condoms may be obtained free at the Woodmont Health Center, most were sent to the college nearly thirty years ago as a promotional tie-in for the movie Super Mario Bros.

Three-Mile Extension Cord
At present, the Woodmont College microgrid provides only enough energy to power the spinning teacup ride in the Office of the Chancellor. That means you’ll need an extra-long cord to run from your dorm, down I-104 into town, and through the back door of dive bar The Tipsy Scab, whose owner (Woodmont ’87) has graciously agreed to allow Woodmont students to use one of its outlets when the Elvira pinball machine isn’t working.

Bed Sheets
You do not want to see what you’re sleeping on. Put the sheets on blindfolded or while wearing the darkest sunglasses you own.

Heavy Sweaters/Jackets
The winters at Woodmont are punishing, and once you evacuate for a fire drill, it’s often months before someone remembers to let you back in.

Computer
Most students prefer the convenience of their own device, though the Woodmont Computer Lab remains an option for those who understand that, due to malware, they’ll be sharing their assignments with Iran.

Cosmetics/Toiletries
The nearest drugstore is three ferry rides away.

Ferry
There are no ferries. 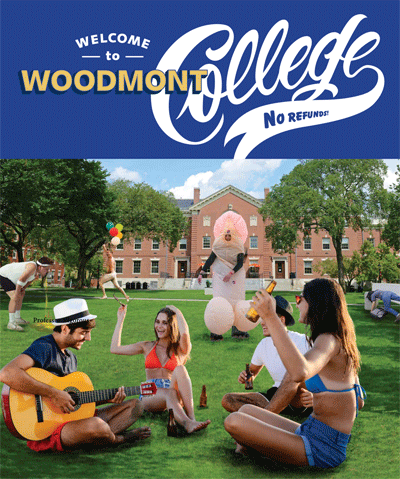