Helloooo CoffeeCon! Are you ready for this year’s keynote address??? Can I get a “COFFEE?”

No, I meant, can someone really bring me a coffee?

Ha-ha, just kidding. Just wanted to give a quick shout-out to our emcee, Mickey Delflorio. Mick, that “whatever happened to just ordering a freaking COFFEE?” bit gets me every year. You can catch Mickey on WNYW’s “Leave The News On Then LAUGH” next Saturday night at 4:50 am.

But let’s get down to beans-wax. [Squints at prompter] Sorry, “business.” I want to start you off with a little thought experiment.

Starbucks built its empire on the three-dollar iced coffee. Then we invented the term “cold brew” and had huge success with the four-dollar coffee. Then brunch places started selling cold brews with a brand name attached to them, and pushed it to five. And who can forget our keynote address two years ago, “Nitro: A Thing Now.” And the six-dollar coffee was born.

But that got me thinking: What’s a number that’s not six, but higher than six?

Like a lot of you, my first thought was, “Seven.” As in Seven dwarves, the Lucky number seven, seven coffees — if someone order that many — and seven other stuff. But something about seven didn’t quite sit right with me. Was it too predictable? Was higher than six enough? Was I truly thinking outside the coffee-bean box?

And that’s when it hit me: EIGHT. DOLLAR. COFFEES.

I know what you’re thinking: “How could that possibly work?” Well, for coffee shops that use chalkboard menus or dry erase boards, it’d be a simple matter of erasing the number “6” with a finger or velvet ‘erasing’ cloth, then, using a stick of chalk or marker, drawing the snowmanesque Arabic symbol “8” in its place, indicating the number eight.

Places with printed menus have several options: 1) Reprint the menus with “8”s on them, 2) White-out the current price with liquid paper then draw an “8” over it, or 3) Just tell people it costs eight dollars now. Or don’t, who cares. They were just about to order a six-dollar coffee anyway. They won’t notice or they’ll be too embarrassed to say anything, and you’ll gain money — everybody wins.

The results will speak for themselves. I’m no coffee economist, but I crunched some numbers, and check this out: 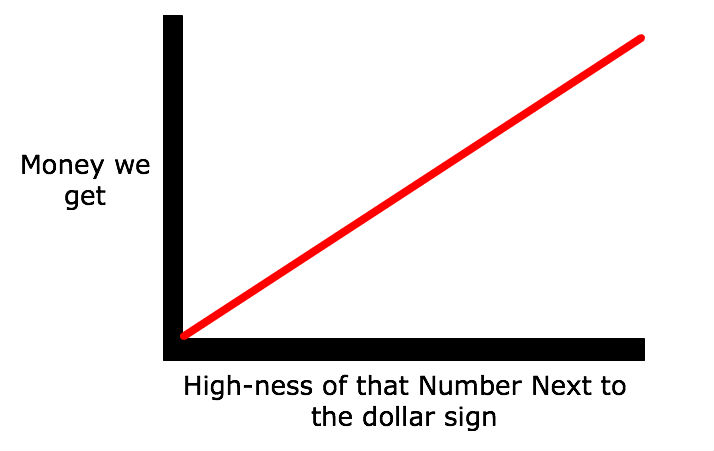 By increasing the price by two dollars, it will result in two more dollars going to us, and then we’ll, like, have it. That’s pretty cool. In turn, we can then use those dollars — certificates of legal tender based on an agreed-upon value system — for goods and services, such as, coffees at other places, or soon-to-be $7 Kind Bars. Or we could just pay our farmers a living wage.

But seriously. We’re still in the prototype phase of coming up with a name for this eight-dollar coffee, in the unlikely event that some unruly consumer asks, “Why are these eight dollars now?” but we’ve got it narrowed down to several strong contenders: “Steel Drip,” “Snap-Chilled,” “Purebean,” “Bolderrino,” “TrueCoff,” “Coffee II: The Drinkening,” “Lil’ Eightsie,” and “Making That ‘Gimme Money’ Gesture By Rubbing Your Thumb Against The Insides Of Your Fingers: The Coffee.”

I’m confident that once we get this moving, together, we can make EIGHT…

[Brings up a slide with “8cellent” on it]

And for the record, yes, I considered going with “Gr8,” but that wasn’t bold enough. We didn’t get from $3 to $6 coffees in like four years by thinking INSIDE that theoretical beanbox, people.

In closing, I just want to say — Randy O’Gorman at JuiceCon, you may have turned some heads with your new $56 juice announcement, but make no mistake: coffee’s GUNNIN’ for you.