Once upon a time, there was a young woman named Sarah living in the big, big city. And, although Sarah was (first and foremost) an advertising executive who also had a lucrative-yet-fulfilling side-career as a freelance events coordinator… she was also a bit on the short side. So everyone just called her “Little Red.”

Because people kind of suck.

But that’s not important. What is important is that, like so, so many of us on this crazy blue marble, Sarah was looking for love. And one day, while she was eating lunch at the Au Bon Pain on 68th Street, she matched up with a tall, handsome stranger on a very popular dating app. Let’s just call this app Tinder.

Because that’s what it was.

Glancing at her phone, Sarah couldn’t help but note that Mike looked pretty darn handsome… a mostly symmetrical face. No visible scars. And, even though his bio was just a quote from the Ashton Kutcher movie Dude, Where’s My Car? (no one’s perfect), he seemed like an interesting and attractive enough guy.

So, after a few days of casual texting, they decided to meet up for drinks. Mike chose the venue: 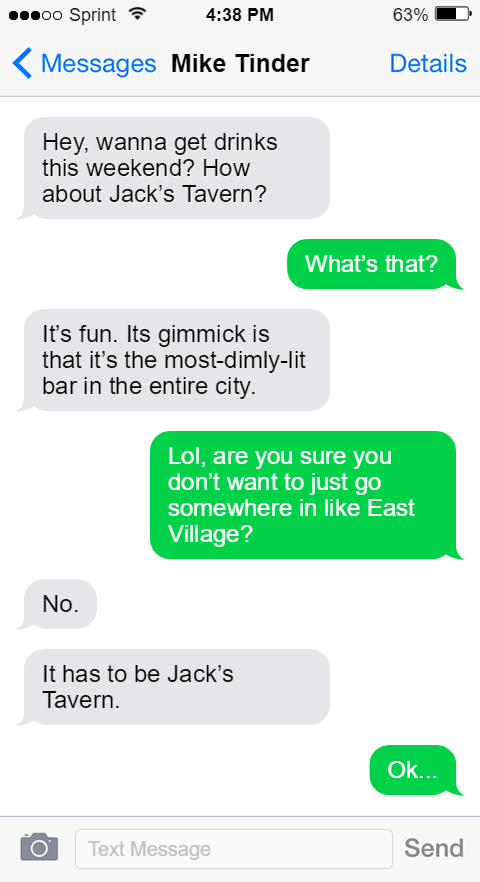 But Sarah decided to give Mike the benefit of the doubt. After all, Hemingway also drank a lot. And he wrote The Sun Also Rises, which is a pretty good book.

As her eyes adjusted to the darkness, however, Sarah found she had trouble recognizing the man in front of her. He was… a little wider than he looked in his pictures. A lot wider. And older. And also, remember that visible scar I said that he didn’t have?

He totally had a scar.

Sarah tried to be diplomatic.

Mike laughed and replied, “All the better to see you with.” Which was a pretty messed up thing to say. As I said, Mike was kind of, you know, the worst.

After a few minutes of awkward small talk, Sarah (perhaps less-diplomatically than she could have) decided to address the elephant in the room.

Mike did not like that last line one bit. And, downing the dregs of his fifth Miller High Life, he immediately broke into a rambling monologue that sounded very well-rehearsed. As if it had been said many, many times before.

“Wow. So you’re just like every other girl out there, aren’t you? Too shallow to appreciate a real-”

Sarah groaned because she knew where this was going. And while it probably would have made her feel better in the moment to yell out that Mike was being a drunk jerk; that he had lied to her for a week now; and that, yes, he was right, dating in general is incredibly superficial, but, if he was actually trying to make a meaningful connection, he needed to represent himself a little more realistically. Because, seriously, how the hell was any of this her fault?

But fortunately, Sarah was an accomplished advertising executive who also had a lucrative (yet fulfilling) side-career as a freelance events coordinator. And she didn’t need to make a point, dammit! So, flipping Mike the bird on her way to the J train, Sarah made her way out of Brooklyn and went on with her life.

And finally, in what would ultimately turn out to be a fun (and coincidental) parallel to the fairy tale Little Red Riding Hood… three days later, a lumberjack murdered Mike “Wolf” Harrison.

And Sarah lived happily ever after.