“Went to Grease II. It didn’t live up to the first one, but it was pretty good. Good-lookin’ leads. Shallow characters, tho.”

“… hour long Facts of Life on. It was sad. They graduated.”

“Went to Beatlemania. It was really good. They were really convincing & we heard some good music.” 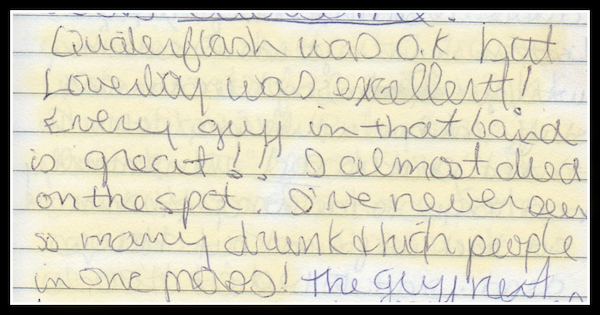 “Quarterflash was o.k. but Loverboy was excellent! Every guy in that band is great!! I almost died on the spot. I’ve never seen so many drunk & high people in one mass!”

“Chuck & Diane Royal Romance was on. I liked it better than the one on Friday night.”

“Baryshnikov had a special on tonight & it was good & funny.”

“Barry Manilow concert!! I cannot believe how good it was!! He is a real performer & he really brought down the house!! Oh!” 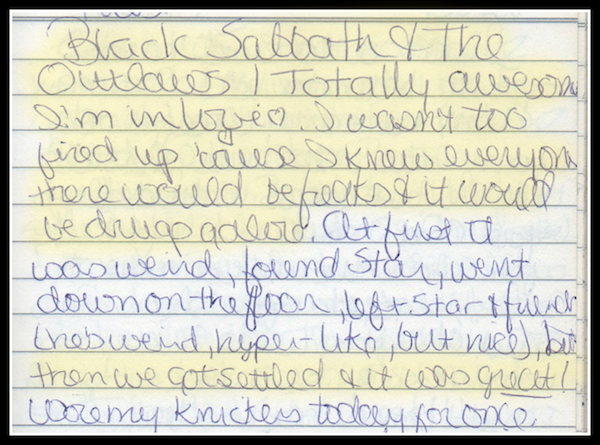 “Black Sabbath & The Outlaws! Totally awesome. I’m in love. I wasn’t too fired up ‘cause I knew everyone there would be freaks & it would be drugs galore…then we got settled & it was great!”

“Went to the Aldo Nova air guitar contest with Geoff. We saw 3 people do it. Hilarious!”

“RUSH!!!! In concert! It was awesome. Geddy is totally impressive! We were down on the floor in the midst of the action for most of it. Yow!!”

“Billy Squier! Totally awesome! What a fox! Nazareth (sigh) was supposed to open, but gosh-darn it, they cancelled! Local group Mirage opened. They were o.k.”

“I got a letter from Jenni. It was neat. She told me how she’s accepted Christ into her heart. I’m glad and envious.”