Q: I think some people might look down on your job.
A: It’s easy to be snooty. Had I not gotten this job, I would never have known how much fun it is.

Q: You’re a teacher at a place that does drinking and painting parties.
A: Yeah. It’s sort of a fad concept, but it’s definitely had some staying power. In the early 2000s, it was this new idea, and studios were popping up all over the place. They are like BYOB places, so people bring wine, or anything else under the sun. I’ve seen people walk in with handles of alcohol for a three-hour class.

Q: How did you find this job?
A: I actually started doing the marketing for this company. I was interested in working for a women-owned business and marketing is good experience for anyone. When I moved on to a different job, I decided to stay and keep painting with them. I’ve been doing it for three years now.

Q: What is it like?
A: It is a one night, copy-what-the-instructor-is-doing kind of thing. Most of the people that walk in the door have never painted before in their lives, or have only painted in situations like this.

Q: Does everyone get drunk?
A: People come in thinking they’re going to get drunk, but everyone ends up focusing so much on their paintings, that people pretty rarely get drunk. When they do get drunk, they get really drunk.

It’s always one of two camps. I’d say 80% of people drink less than they expect, and 20% are there to have a good time and very much do so.

Q: Did you know how to paint when you started teaching?
A: I have a Bachelor of Fine Arts degree, so I have been painting since middle school. I had never taught painting before, but when I was working in marketing, I saw so many of the classes that I was like, “Oh, I could do this.”

Q: How do you decide what you’re going to paint?
A: If it’s a private party, people will pick images from our gallery. For the most part, for the public classes, they have just a big database of paintings and put them up on the calendar and people sign up for them.

Q: What are you like as a teacher?
A: I try to remind people to take a deep breath, have some wine, and have fun.

I’ve always loved Bob Ross, and as a teacher he is calm and encouraging. He emphasizes that individuality is okay. He never planned his paintings in advance, and I think that’s good for inexperienced painters to see. You should embrace the things that make your painting different.

Q: Do you know a lot about Bob Ross?
A: My whole life is Bob Ross. Everyone buys me Bob Ross stuff.

I don’t consider myself a superfan of Bob Ross, I like him, I respect him, I just sort of fell into this job and I’ve spent so much time with him… But you would walk into my house and think I was a superfan.

Q: Any Bob Ross trivia I should know?
A: Let’s see… He permed his hair to save money on haircuts. He was in the military, stationed in Alaska, and he was really inspired by the nature there.

When you watch his show in volume, that’s when it becomes the most interesting. A lot of people don’t pay attention to what he says, but he will tell crazy stories, or he’ll say stuff that’s so dark and depressing that you’re like, “Whoa, Bob are you okay?”

I think Bob Ross is the original Paint & Sip person. There are all sorts of Bob Ross drinking games.

Q: Really?
A: Yeah. I was teaching painting at one of these studios, and my old roommate and I used to watch Bob Ross and play a drinking game. The owners of my local bar liked it so much that now in addition to teaching at the studio, I host a Bob Ross drinking game night at my local bar.

My whole life has been consumed with teaching drunk people to paint.

If you’re that type-A person and you’re painting a tree, it can be really hard for you.

Q: Have you seen people get upset?
A: It’s not super-common, but every few months it will happen.

The worst I had was a woman who was there with her girlfriends and she was really struggling. I kept coming over and trying to help her, to coach her…

She would not listen, but just double-down on what she was doing. She got so frustrated with her painting that she ended up completely destroying it. She wouldn’t take a picture with her friends at the end, and she stormed out of the studio, waiting for an Uber by herself while her friends were like, “Whoa.” This is supposed to be an activity that’s relaxing on a Friday night with your friends; she had some issues to work out.

Q: Do people tip you?
A: Sometimes, thanks for asking! Gratuity is always appreciated. I’m always delighted, like, “Wow, your painting looks like shit and you were still really happy with it.”

The vast majority of paintings are surprisingly good though. Sometimes I’m like, “It was really bleak for a while there and you really pulled it off.”

We do nude model painting parties at the studio as well.

Q: Oh boy.
A: For every bachelorette party and 40th birthday party in the city, it’s what you do.

Those are funny because these people are paying for a naked man to stand in front of them but they all watch the instructor because they want to learn how to paint.

Painting humans is really difficult, and all of those paintings look a little rough. If you do hang them up it will be in a closet or a bathroom.

The Instructor is trying to explain human proportions and shadows In two and a half hours. It’s challenging, how big to make the legs versus the head.

And they will always paint the most enormous dicks. They always think they’re original, like, “Do you see this in every class?”

Q: Are the men hot?
A: That’s part of their interview, they have to send photos. And they have to get naked as part of the interview process. People will literally complain if the model is not hot enough. It’s unbelievably objectifying but I have limited sympathy for that.

Most of the guys are in their 20s and 30s, it’s a side-gig for them, and they’re going to the gym anyway, so they might as well make some money from it.

Q: You sound like you really enjoy this job.
A: I do! There are few jobs where you get paid to educate and have fun with people, and force people to try something they’re never done before, where there are no stakes.

Whether you’re bad and you’re able to laugh at yourself, or you’re good and it’s a fun challenge where you’re getting drunk with your friends, it’s a good time, it definitely is. 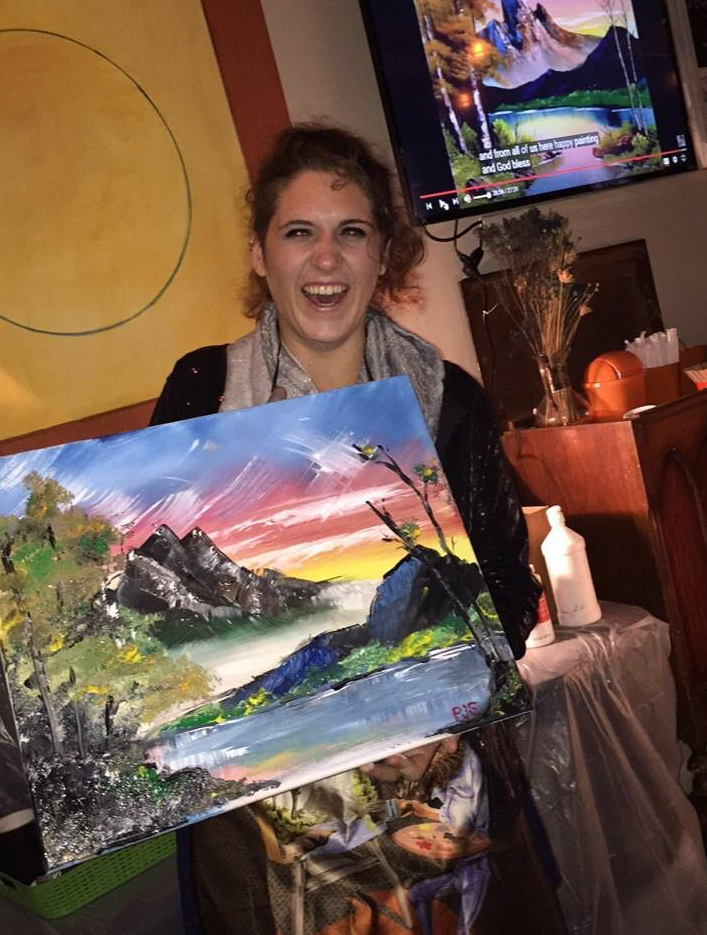