Many things have gone missing since Barack Obama saddled up his Arabian camel and began riding a hole through our Constitution more than four years ago: economic growth, the private healthcare industry, the de facto classification of homosexuals as second-class citizens. But no shortage has been more conspicuous or more alarming than the sudden and recent disappearance of many types of bullets from the nation’s sporting goods stores and online ammunition vendors.

One need not launch too exhaustive an investigation to locate the source of this shortage: various federal agencies, led by the Department of Homeland Security, have reportedly1 been stockpiling hundreds of millions of rounds of ammunition, allowing the federal government to orchestrate a backdoor nullification of the Second Amendment that they could not achieve via their tyrannical proposed gun control legislation. With the feds stockpiling ammunition dumps like an urban hipster collecting an ethnically diverse coterie of Facebook friends, few bullets remain for freedom-loving consumers.

Were the federal government vacuuming up all the surplus ammunition for some useful end, such as to launch the long-overdue invasion of France or to assassinate the editorial board of the New York Times, such an expenditure may be warranted. Sadly, their aims are more predictable: the federal government is, most likely, preparing for a mass coordinated attack to neuter the remnants of the gun-owning public, repeal the Second Amendment, and install the socialist/communist fantasy state that Barack Obama has dreamed of since he was a little boy peddling bootleg whisky on the streets of Nairobi. Anyone who sincerely doubts Obama is a closet dictator hell bent on gutting the Constitution and transforming America into his own personal caliphate need only glance at this sketch found on the president’s Oval Office desk by an APMAG operative who infiltrated the White House disguised as a metrosexual fashion consultant: 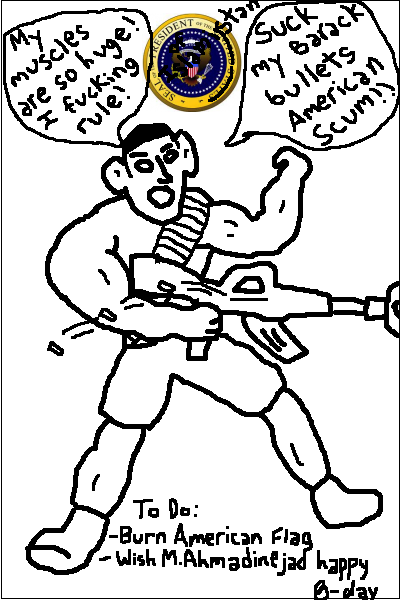 Obama apologists may also care to explain this draft of the first page of his autobiography, which the president carelessly dropped at a campaign event in Montana last October: 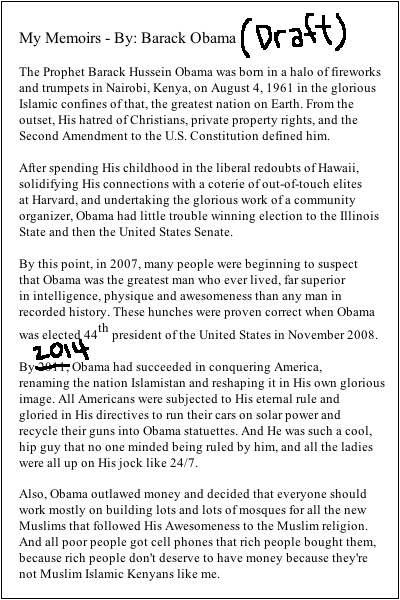 The liberal elite, of course, have resorted to their usual platitudes about the supposedly overreacting patriots who dare to question them, with closet president of the Soviet Fan Club/Massachusetts Democrat John Tierney stating that federal purchases of ammunition have decreased as a proportion of the overall ammunition market in recent years, a shallow claim that attempts to delegitimize those patriots who speak out with their concerns of government overreach by recasting them as wild-eyed conspiracy theorists.

Other simpletons in the liberal lemming herd look up from their farmer’s market baskets just long enough to make the outrageous claim that the Dec. 14, 2012 shootings in Newtown, Connecticut and the subsequent efforts by Congress to step up gun controls sparked an alarmist reaction in the gun-ownership crowd, inspiring them to purchase weapons and ammunition at a faster rate than they could be manufactured. Those foolish enough to believe that the run on firearms and bullets is due to nothing more than the free market at work2 can take a look at the before-and-after Google Maps screen shots below. In the first, taken last August, a firearms manufacturing facility appears to be fully operational in Hartford, Connecticut: 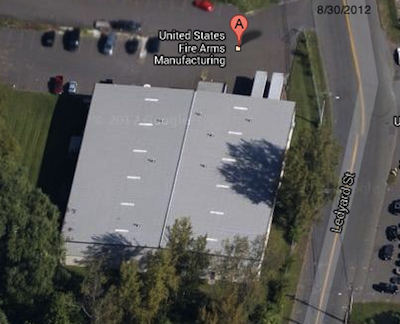 In the second screenshot, taken just last week, the plant appears to have been demolished
to make way for a cockamamie green energy project:

Fortunately, no less a conservative stalwart that Oklahoma Senator James Inhofe, in conjunction with Congressman Frank Lucas, has asked America to come to its senses by introducing the AMMO Act of 2013, which would curtail ammunition purchases by every federal agency outside of the military so that law-abiding citizens could stock up for the inevitable government apocalypse.

Should AMMO fail to pass, however, a transcendental moment may be upon us. This government, which has systematically stripped our freedoms until America is scarcely recognizable, is now attacking the most fundamental freedom of all: our right to own guns and stockpile ammunition. The Founding Fathers drafted the Second Amendment not so that every Johnny-four-wheel-drive could keep a shotgun around to hunt deer in autumn, but principally so that America’s citizens would hold some perpetual defense against tyranny. These men were wise enough to know that, should the government become the sole custodian of weapons, power would shift irretrievably in their favor, leaving the citizen as nothing more than a peasant, bereft of meaningful freedom and subject to the whims of a dictator. The Founding Fathers left it to us, the citizens, to determine the historical moment at which the government had exceeded the maximum authority allotted it by us in our Constitution, and to at that point overthrow and displace that government with one more truly of the people.

The frantic rate at which the government is currently stockpiling ammunition is the most alarming sign of a democracy in decline since women earned the right to vote, and a cue that necessitates that America’s gun-owning households prepare for a possible revolution. The more than 300 million guns in private households should be more than sufficient to take down the United States military. For those skeptics who think that our combined civilian forces stand little chance against the full force of the most well-trained and superbly armed battle force in the history of the world, which is outfitted with 1.5 million active-duty soldiers armed with hundreds of thousands of combat vehicles and tanks, an unstoppable fleet of attack helicopters and fighter jets, and an enormous naval assault force crowned with 10 aircraft carrier groups, to say nothing of its nuclear arsenal, they clearly have no respect for historical precedent.

The history books overflow with tales of rogue bands of seemingly outmatched fighters outwitting and outmaneuvering vastly overpowering empires. Take, for example, the heroic ewoks, who, as recorded in the 1983 documentary Return of the Jedi, took down the Evil Empire’s ostensibly invincible AT-ST Walkers using improvised tripwires. There is little reason to believe that modern-day U.S. revolutionaries could not similarly dismantle the strike forces of Dictator Obama with cleverly set traps constructed from readily available and highly adaptable mass-market merchandise. A demonstration of this sort of brilliant destructive improvisation can be observed in this photo of militia members at an APMAG training exercise in rural Tennessee destroying an Abrams tank by deflecting its shells with a trampoline: 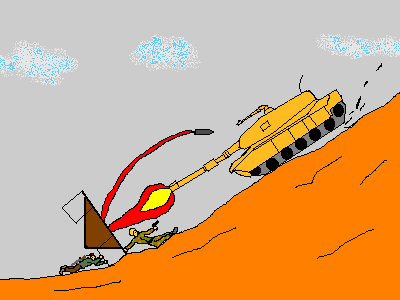 Our hope at APMAG is that this radical call to arms is unnecessary, but we will lead the crusade against the abrogation of our most fundamental liberties should Heir Obama’s continued arrogance and assaults on liberty galvanize us into the fight.

1 Our principal source for this government activity is far-right Internet blogs, who we find have far more insight than the scores of supposedly independent journalists collectively employed as the Obama Administration’s propaganda arm.

2 While it is convenient to seek a free market explanation to cover up a rogue president’s misdeeds, it is common knowledge that free market explanations of social phenomena are useful when explaining the economics of wage suppression or the logic behind allowing factories to dump limitless amounts of unfiltered chemicals into the atmosphere.