When Hurricane Sandy smashed into the New York and New Jersey coasts late last month, it left a legacy of flattened buildings, flooded towns and ruined lives. Perhaps more pernicious than the natural disaster itself, was the heavy hand of government that accompanied the storm. Missing no opportunity to entrench itself in the lives of the American citizenry, a senseless tangle of bureaucrats descended upon the affected areas like magical dependency ferries, setting up impromptu government shelters and free-for-all distribution centers, handing out water, clothing, ice, diapers and other non-essentials, as documented in the below photograph of a Staten Island man1 picking up a new dragon and elephant, among other so-called emergency supplies at a National Guard relief site:

These handouts came on top of arbitrary curfews, road closures, and repeated first-responder trespasses onto private property, chaperoned by flimsy excuses about rescuing inhabitants from rising floodwaters. Now, with the lights back on in Manhattan and a blizzard of handouts piling up in far-reaching beach communities, the elite liberal establishment that excoriated President Bush for his deft and underrated response to Hurricane Katrina is suddenly ready to nominate FEMA for a Nobel Peace Prize.

Enough. It is time to take government out of the business of natural disaster paternalism. Government has a role in such situations, and it is to go away, liberating Americans to do what they do best: take care of themselves.

When they are not hamstrung by random evacuation orders and fear-mongering media hype to stock up on trivial items such as blankets, batteries, and nonperishable foods, Americans can focus on true storm preparation, filling their shelters with essentials such as razor wire (to protect their property), guns and ammo (to kill looters and trespassers), and attack dogs (for the same reason). These supplies have other uses as well, as illustrated in the photograph below of a man in Arkansas repelling a tornado with his shotgun: 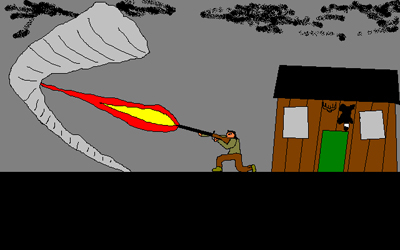 What, a government-dependent liberal bed-wetter may ask, about those who truly are in danger and wish to be evacuated, but lack the means to do so? The answer is the same as we would suggest for any problem: outsource those tasks to the private sector. There would be no shortage of American corporations ready to apply their business savvy to a lucrative new disaster relief industry. Rather than freeloading off their neighbors’ tax dollars by forcing government evacuations at the arms of soldiers who should be busy invading Iran, those wishing to leave could pay to be part of a General Motors Evacuation Convoy, where they would be delivered to a Disney Resorts Evacuation Fun Zone, eating in an Applebee’s Hurricane Cafeteria and sleeping on cots in a Comfort Gymnasium presented by Holiday Inn Express.

With the private sector dutifully relieving the groaning machinery of government from its obligations as self-appointed protector of the American people, we can shut down the Federal Emergency Management Agency and say goodbye to those disaster relief appropriations from Congress. The money can then be rerouted to more essential programs, like purchasing 1,000 of these Asskicker Class Viking Deluxe Destroyer Planes, designed by APMAG: 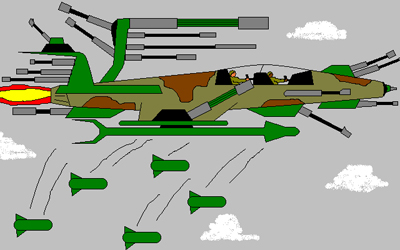 Those who lack the funds to directly escape will have to rely on America’s many and generous charities, or, better yet, tap the self-reliant roots of their forebears. As the 1980s action-adventure series The A-Team memorably documented, people are perfectly capable of assembling high-powered escape vehicles from miscellaneous piles of scrap metal and other materials, as demonstrated in this photo of a New Jersey housewife and her children fleeing from a flood in a helicopter she fashioned out of basic household items:

A fair-minded observer may ask why these dolts were in need of rescue at all. In the wake of incessant warnings of the impending storm surge from the media and government, any person possessing any mental faculty at all would have simply retreated to one of their vacation houses2 to avoid Sandy’s worst effects.

But, with the storm striking just one week before the start of World War III/the re-election of Barack Obama, it is fair to ask: how natural was the natural disaster that was Hurricane Sandy? We suppose that it was just a coincidence that, on the eve of a tightly contested presidential campaign, a storm that simultaneously united politicians of both parties and showcased the supposed efficacy of big government descended upon the Atlantic Coast, providing an incumbent president with a ready-made headline: Socialist Policies Successfully Negate Effects of Hurricane Caused by Global Warming from Emissions by Small Businesses. We could also suppose that it is simply serendipitous that Sandy put a bulls-eye on the rotten heart of the left-wing media’s Northeast empire, giving this reflexive gaggle of Obamaphiles a front-row seat to the government’s recovery efforts. We could believe all that, or we could believe that this blueprint for a hurricane-making ship uncovered by an APMAG operative working deep inside the Pentagon is real: 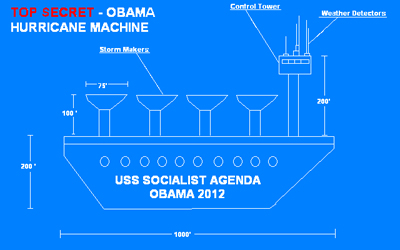 It is the stated goal of APMAG to dislodge the government from all areas of life that could be better addressed by the private sector, such as social security, Medicare, lawmaking, and the defining of a fair corporate tax scale. Disaster relief is no different. It is time to properly re-order the government’s role in this area before the true disaster of big government sweeps through and ruins us all.

1 An APMAG investigation revealed that this freeloader already had three dragons and an elephant at home.

2 A survey of APMAG staffers concluded that the average American possesses 2.4 vacation homes, at least one of which is built on a mountainside at Vail or Jackson Hole, a vantage from which a person could avoid nearly any flood.