There was a time when I, the founder of APMAG, was a lad, when America looked a lot more like America. It was a time when men could smoke in bars without being lectured about how they were going to give the ex-con/security guard working the door lung cancer, when a factory could release the harmless byproducts of industrial manufacture into the nearest convenient waterway and not have to hire a battalion of lawyers when some child of alcoholics was born with an extra arm forty miles downriver, and when minorities mostly kept quiet and stayed the hell out of the way. It was a purer America. A freer America. And in many ways, a better America.

Every year, at the end of that American year, we, as Americans, would celebrate a holiday called Christmas. You have probably never heard of Christmas. If you have, you probably think it’s Santa Claus’ birthday. But no, it is first and foremost a grand religious tradition, celebrating the birth of our lord and savior Jesus Christ. A day devoid of commercial influence save for the exchange of an occasional gift. A day of warmth and togetherness and cheer.

That sacred day is now nearly invisible in our culture, the victim of a brutal and ceaseless decades-long war on Christmas by the usual cadre of media, liberal elites and big-government bureaucrats to marginalize and delegitimize the grand Christian tradition that is the foundation for our nation’s social and civic compact. It is no great coincidence that Christmas has virtually disappeared at the same historical instant that this gang of cultural bullies has eviscerated our landscape with a politically correct bulldozer, demanding that we allot equal attention to all races and traditions, even those of dubious cultural influence and import, such as Buddhists, cavemen, and women.

As a result, the holiday is nearly invisible, tucked into some indistinct corner of the calendar like Flag Day or Express Your Support for Islam Day. Just take a look at this official U.S. government calendar, which glorifies a number of obscure and made-up holidays that further a far-left liberal agenda and cater to whining minority groups while completely deleting Christmas from existence: 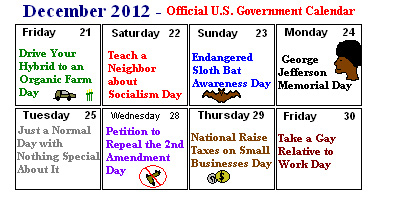 Perhaps worse than the government’s Orwellian revision of the holiday calendar is the willingness of vast herds of citizen-lemmings to adopt this willful ignorance. It was once universal custom in America when encountering an acquaintance, store clerk, or fellow boycotter in front of an integrating university building during the holiday season, to say, “Merry Christmas.” Now, even an allusion to what was once the most sacred of days in a public expression of conviviality brings the sort of indignant reaction once reserved for those who cannot decode a simple seating chart on a public bus. We’ve re-wired our society into a reactionary gang of robots, incapable of actual thought, pre-programmed only to spew platitudes about the weather and how happy we are that our nation is being overtaken by Muslims. Just take a look at this pamphlet handed out to workers at a retail store in Missouri, giving them acceptable responses if a customer greets them with “Merry Christmas”: 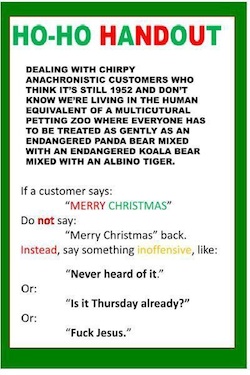 Part of the reason for this mass fear and ignorance, of course, is the now nearly-complete secularization of our public schools, a transformation that has replaced all religious teachings and discourse with a dubious set of lessons based upon the sacrilege of the scientific method. The institutionalized opprobrium directed at organized religion from the supposedly respectable bricks of our public school buildings can best be summed up in the poster below of a brontosaurus stepping on Jesus, which APMAG operatives found hanging in an eighth-grade classroom in Maryland: 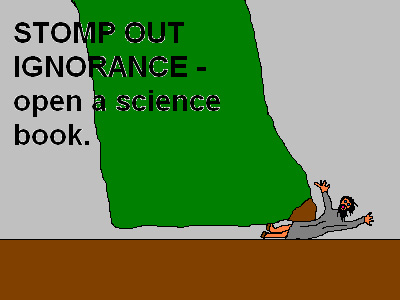 Each time a world-wise Fox News commentator courageously points out that our nation has devolved into a refuge for Christian-hating secularites and hyper-sensitive minorities, they are assaulted by a liberal-PC axis of hatred making fantastical claims that Christmas is still the dominant cultural event in our nation. Such nonsense can be disproven simply by comparing the two photos below, both of the same downtown area in a small Indiana village. The first picture shows the town as it appeared in 1953: 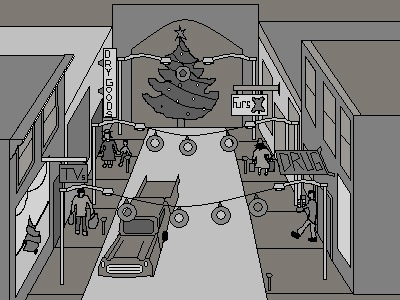 Now take a look at the same commercial strip in 2011: 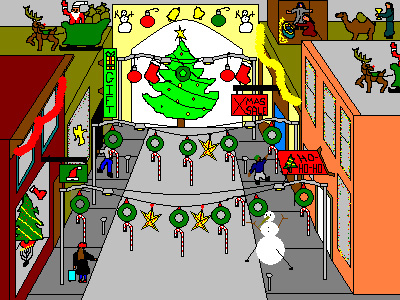 No, you are not seeing things: that is a menorah planted directly in the middle of a Christmas display window in the lower-left-hand portion of this photo. An absolute outrage. A person walking down that street could not be blamed for being tossed into a spiral of confusion, in which they would not be certain exactly what time of year it was, or if they were in America at all.

With that, and with a volume of evidence that is as overwhelming as it is depressing, I surrender and, with great bitterness and sadness, bid farewell to the once grand tradition of Christmas, another casualty in the ceaseless and ruthless liberal drive to destroy everything worth having in our great nation. I hope only that a future America, not so wholly constrained by an out-of-control nanny culture, can somehow resuscitate what once was a pure and wonderful tradition.

Farewell, Christmas. You will be missed. 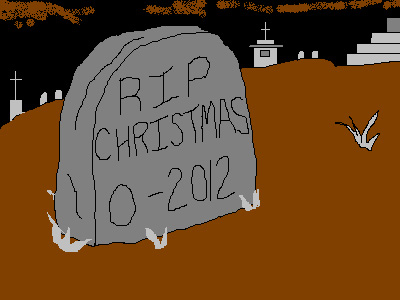