When it comes to sports, conspiracy theorists play ball. The sacred baseball diamond, hallowed football rectangle, wooden basketball also rectangle, and cold hockey curved rectangle are revered by many, but a conspiracist knows a rectangle always hides a secret and that a diamond is just a wealthy rectangle.

What’s the truth behind sports? Why all the games? Where’s all the money go? If there are playoffs, where are the playons? Is bowling truly a sport or have I been lying to my son? How can a number be retired? Doesn’t that affect math and counting?

I’ll attempt to answer some of those questions as indirectly as possible by examining the claims of conspiracy theorists, conspiracy debunkers, and then rebunking with my own ramblings. If all goes as planned, this article will be hanging in the Hall of Fame of Truth for all to see and admire before leaving and going to a better, more existent Hall of Fame.

Conspiracy Claim: Described as the “Phantom Punch” incident, Sonny Liston, at the time viewed as an invincible force in the ring, took a fall in a boxing match against Muhammad Ali in order to pay off the debts he owed to the mafia. In the match, Liston was knocked out by a seemingly weak or non-existent “phantom punch.”

Debunking Claim: As history progressed, Ali’s boxing prowess was shown time and time again. It’s not surprising that a seemingly innocent punch took down Liston, especially since it was thrown by perhaps the greatest heavyweight fighter ever and a man who was known for his deceptive jabs.

Rebunking Claim: Sonny Liston, like everyone not in the mafia, definitely owed money to the mafia. Of course there are many subsets to the mafia. There’s the Sicilian mafia (La Cosa Nostra), the Japanese mafia (The Yakuza), the Swedish mafia (IKEA), and countless others. Sonny Liston specifically owed money to the Ghost mafia (The Ya-Boo-Za), a group of villainous specters mainly known for using haunted houses as fronts for their illegally spooky activities. Tired of Liston’s promises to pay them back, the Ya-Boo-Za took things into their own transparent hands by betting against him and having their strongest and most able to punch through to the corporeal world ghost knock him out during the Ali fight. 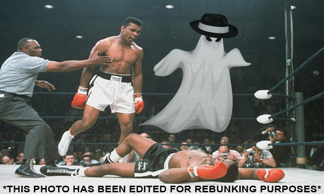 Conspiracy Claim: NBA commissioner David Stern rigged the 1985 NBA draft so the New York Knicks, a major market team that the league wanted to succeed, would get the first pick and select the phenomenal center Patrick Ewing. The first pick was determined by Stern, who “randomly” chose an envelope containing a team’s name and logo. The Knicks’ envelope was placed in a freezer beforehand so Stern could pick it by feeling the cold.

Debunking Claim: Only conjecture, and no actual evidence, exists for this claim. If the far-fetched and almost comical “frozen envelope” story was true, some form of proof would have surfaced in the 30 years since the draft.

Rebunking Claim: The draft was definitely rigged, but how it was rigged has completely been misunderstood. The frozen envelope theory is as far from the truth as Muggsy Bogues is from riding a legitimate rollercoaster. David Stern knew to pick the New York Knicks’ envelope because it was the only one that wasn’t on fire. People often forget that the 1985 NBA draft was sponsored by Duraflame, which is why the flames never drew the suspicion of the basketball world and why Duraflame’s already strong sales numbers truly boomed in 1985. 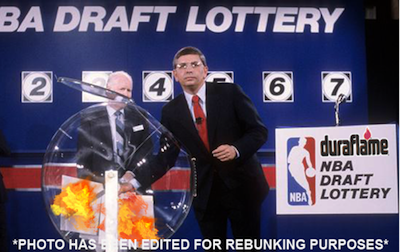 Conspiracy Claim: Michael Jordan’s retirement from basketball in 1993 was due to his serious gambling problem. The NBA was going to suspend Jordan from the league, but instead allowed him to say he was retiring to try playing baseball in order to save his, and the league’s, reputation.

Debunking Claim: Jordan has stated that he chose to gave baseball a try since his deceased father had always imagined him as a Major League Baseball player. Plus, while Jordan was known as a gambler, no proof has come out that the NBA was going to take any action against him.

Rebunking Claim: Jordan left the NBA to play professional baseball because in 1993 the odds were in his favor.

Conspiracy Claim: On August 14th 1997, Cal Ripken Jr., in the midst of his record consecutive games played streak, found his wife sleeping with mutual friend and actor Kevin Costner. A distressed Ripken Jr. told Baltimore Orioles owner Peter Angelos that he couldn’t play in that night’s game, so Angelos arranged for a power malfunction in the stadium’s lights to postpone the game and allow Ripken Jr.’s streak to continue.

Debunking Claim: Both Costner and Ripken Jr. deny this absurd claim. Furthermore, there is proof that Ripken Jr. was at the stadium that night and ready to play the game, so there was no threat of his streak being broken.

Rebunking Claim: The lights went out at the stadium because Costner was sleeping with them and caused a malfunction with one of his well known “Electric Costner Kisses.” Why would he do that? To pay off his debts to the Ya-Boo-Za, of course. 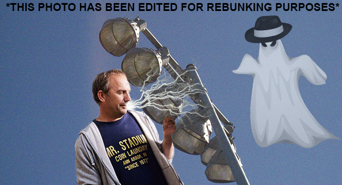 Debunking Claim: What? No! C’mon you know that was a movie. You can’t genuinely believe that was real.

Rebunking Claim: It was a movie. Specifically, a documentary about a real basketball game. Why would Michael Jordan play in such a game? Let’s just say he made more than one wager in 1993 and that he, like everyone else, had some mafia debts to pay.