One of the most well known conspiracy theories is that NASA never actually landed on the Moon, and the Apollo missions were actually filmed on Earth, which is not on the Moon. Various forms of facts and evidence have been brought up to debunk this conspiracy theory, but as we all know, facts and evidence are just a set of quotation marks away from being “facts” and “evidence.”

Did we really land on the Moon? Maybe. I know I didn’t, and that’s enough justification to delve deeper into the matter and rebunk the debunking of this conspiracy theory. For if we completely rule out the possibility of a conspiracy, aren’t we the same as those that completely rule out the possibility of a Moon landing? We are and don’t act like we aren’t.

CONSPIRACY CLAIM: No stars are visible in the pictures taken by the Apollo astronauts from the surface of the Moon. The pictures should be filled with stars.

DEBUNKING CLAIM: The landings took place during lunar mornings, with the Sun shining brightly. By comparison, other stars aren’t bright enough to be seen over the Sun’s light.

REBUNKING CLAIM: The landings may have happened during lunar mornings (something you had assumed was the name of a lo-fi college rock album and not an actual occurrence until just now), or, having spent so much money getting famed director Stanley Kubrick to film the fake Moon landings, NASA didn’t have enough money to hire someone capable of making a realistic looking photo. They got an unpaid intern to whip together something at the last minute. The intern didn’t know there were stars other than the Sun, something you learn only after you are a full-time NASA employee, leading to the inaccurate photo. 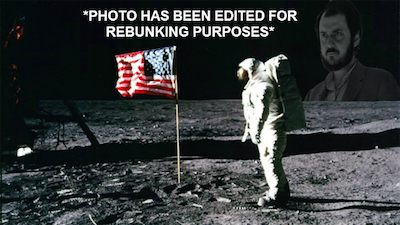 CONSPIRACY CLAIM: When astronauts put up the American flag on the Moon it waves, yet there is no wind on the Moon.

DEBUNKING CLAIM: The flagpole was rotated several times into the Moon’s surface to make it stand up straight, this caused vibrations in the pole that led to ripples on the flag, making it seem to wave.

REBUNKING CLAIM: The reason that the flagpole was rotated so many times was because the astronauts (or actornauts) were nervous that the flag would fall over and Kubrick would yell at them. No matter how many times they’ve been on the stage, actors still get nervous about making a mistake and angering the crew. A lot was at stake for the Apollo actors: a big pay day (minus 10-20% for their space agents), a chance to deceive billions of people, the possibility of being recast for more hoaxes, and the guarantee of being murdered if they messed up or told anyone about anything. Under that pressure, even the greatest actor is going to shake the flag and cause it to ripple. Hell, Marlon Brando would’ve been twirling that pole around like he was leading a parade. A parade of lies.

CONSPIRACY CLAIM: No blast crater is visible in the pictures taken of the lunar landing module.

DEBUNKING CLAIM: Due to the Moon’s low amount of gravity, the power of thrust at take-off and landing is low, and since it landed on hard rock, no blast crater was made.

REBUNKING CLAIM: The guy on set whose job it was to make the blast crater was sick that day. 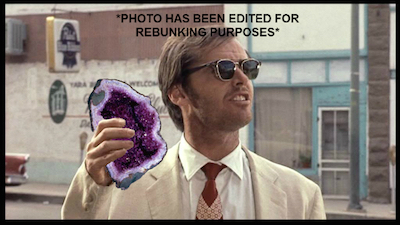 CONSPIRACY CLAIM: The rocks brought back from the Moon are identical to rocks collected by scientific expeditions to Antarctica, hence they’re not from the Moon.

DEBUNKING CLAIM: While Moon rocks have been found on Earth, they are all scorched from entry through the Earth’s atmosphere. Geologists who studied the rocks brought back by Apollo astronauts assured they were from the Moon.

REBUNKING CLAIM: There’s not a single geologist who isn’t a failed actor. Every geologist who studied those “Moon” rocks knew well they were from Antarctica or at least made in a rock lab near Antarctica, but they saw the chance to lie and use NASA’s connections in the film industry to further their own acting careers. If you take a look at a list of those geologists who verified the authenticity of the rocks, you’ll see some familiar names: Burt Reynolds, Jack Nicholson, and Michael Douglas, to name the three that are the easiest for me to type.