“Welcome to thirty,” she said.

I laughed, but she couldn’t see me. I was lying stomach-down with my face halfway through the hole of the massage table.

“Our bodies can only handle so much for so long.” Robyn, the attractive physical therapist with a Neutrogena face and soccer player’s physique, wasn’t pulling punches. “These muscles,” she said, drawing her hands up my spine and out toward my shoulders, “are weak.”

I felt like a magical eagle with a broken wing. Maybe she sensed my bruised ego, because then she started sugarcoating:

“You are super strong in your arms and up here,” she embellished, pointing somewhere between my trapezius muscles and gallbladder.

The truth is, I had failed the test. To pass, you have to touch your chin to your chest, keeping your head lifted off the table for about 48 seconds. After nine or ten seconds, I’d started shaking like a bobble head.

I wanted to tell her it wasn’t my fault. I wanted to tell her that years ago, I was a decent tennis player. Had a wicked topspin forehand. And in 7th grade, I anchored my team in the shuttle hurdle relay. But here I was, thirty, with a weak back and old-woman slouch.

The last time I’d been here, I was twenty-one. A doctor at student health had referred me to the UVA Sports Medicine and Rehabilitation Center. Throbbing lower back pain—that’s what I got for wearing fashionable boots to class, constantly picking the skinny heels out from between cobblestones as I walked, still trying to keep up with the Jeffersons even in my fourth and final year at the university.

You see, you could wear jeans at UVA… with a fitted blazer. You could even wear sweats… if you had mono. Let me make it plain for you: Brooks Brothers carries a line of UVA sweater vests and dress shirts.

I had also switched to a shoulder bag for my books after discovering that oversized hiking backpacks were all the rage only in Ohio. So between the heels and the bag and a bad habit of showing up to tennis matches without having practiced or stretched since the previous match, my back gave in. Though at twenty-one, back pain felt sexy. As the beautiful, blonde Kelly (does UVA only hire gorgeous physical therapists?) kneaded what I imagined were the striated muscles of my athletic back, I pondered the cost of exceeding Mr. Jefferson’s standards in both the classroom and on the court. Ahhhh, the agony of perceived superiority. 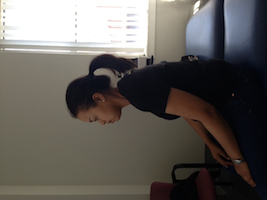 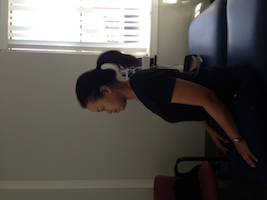 These pictures are real. They have not been exaggerated to heighten your level of terror. You need to know that people age. As you can see on the left, they grow up, and they look like turtles. And then, as you see on the right, they try to sit up straight and look like a stork pushing out a turd.

But you know what’s great about all this? My hair. I made that ponytail in the heat of the moment without a mirror, because I thought it’d be vain to ask for a mirror when Robyn suggested I pull my hair back. The watch I’m wearing isn’t bad either. And the lighting? Phenomenal.

You’re wondering if this is genetic, because then you can assure yourself that you will age differently. Do I come from a line of weak backs? Did my slouching African, German, and Native American ancestors only procreate with other hunchbacks? Were gnomes involved?

While you’re tracing my family tree, I’m doing physical therapy homework. Not just the chin tucks and eagle-wing exercises, but mental notations that every time I sit at the computer or read Elie a book or give Tophs a bottle, I have terrible posture. Robyn says noticing my posture is half the battle. She says I’ve probably slouched forever and it’s just now catching up to me. If Robyn weren’t so pretty, I’d punch her.

Physical therapy isn’t the only way I know I’m thirty. I feel it in my face. When my friend FaceTimes me, I can’t even focus on what she’s saying because I’m smoothing out wrinkles on my forehead. If this is technology, I’d prefer a rotary dial. I have more freckles, too, and I’m not sure when they’ll become raised and create a topographic map across my face.

I also can’t stay up past 8:30 pm if I’m sitting on a couch. At first, I blamed it on the book of Leviticus. A girl could only read about so many ram and bull offerings. But when I started falling asleep during Jesus’ transfiguration and supernatural fish fry, I knew something was up.

I’ll come right out and say it: Thirty can be scary. Do I need a colon cleanse? Can you buy enemas at the dollar store? What exactly is a bunion? Should I wear tights with my clogs?

The most terrifying aspect of turning thirty has been severing my ties to the twenty-something crowd. Twenty-somethings have articles written about them in the New York Times. They own Facebook. They belong to the cool groups at church. Once you’re thirty, you might as well sit on a hemorrhoid cushion and play the organ.

I thought I would have a breakdown right after my birthday in March. Thought I’d need to take a few days away from the kids and visit the electronic cigarette kiosk in the mall.

But I didn’t. I ate leftover sweet potato cake and bought a pair of brown leather flats. Because while thirty is scary, it’s also comfortable. Not in a Depend undergarment way and definitely not in that Cialis bathtub commercial way.

Thirty has allowed me to step out of the hamster wheel. I’m no longer racing against my own thoughts, second-guessing every decision I made in my early twenties, wondering if I could have been or should have been everywhere else other than right where I am. My American Studies major? Fantastic. The two years I spent teaching first grade? Perfect. Writing personal essays rather than news stories? Emotional gold mine.

I’m not saying those futile thoughts never sneak up on me (I’d love to have my old metabolism and figure back). I’m saying, thankfully, they’re no longer my theme music. I don’t find myself haunted daily by the Ghost of Who Taylor Was Supposed to Be. It could be safe to say my quarter-life crisis has ended.

Even if my crisis is only on administrative leave, I’m not twiddling my thumbs until it returns. I’m strengthening my back just like the 43-year-old man on the rehab handout. I’m playing indoor soccer with Elie while she’s in her diaper and I’m in big-girl underwear, because we don’t always have time for pants or potties. I’m dancing with Tophs to a children’s Pandora station, because even though I’m that Black girl with no rhythm, I’m the best dancer he knows. And while I’m feeling good about this age thing, I might just get a head start on those bone density scans and estrogen pills.