On May 28, 2016 around 4:00 PM EST, the shot heard round the zoo was fired. A three-year-old boy fell into a gorilla enclosure at the Cincinnati Zoo and a 17-year-old Western lowland gorilla named Harambe was shot and killed. Zoo officials claim Harambe was sniped like Kennedy in order to protect the boy, but many conspiracy theorists claim monkey business is afoot. So much monkey business that it’s gorilla business.

Was Harambe’s murder warranted? Was he truly a threat to the child or did Harambe just want to form a gorilla-human friendship that would be so heartwarming that even the folks at Pixar would be like, “Jeez, cut it out,” before cashing their billion dollar weekly paychecks? What’s that three-year-old up to now? What will it be like when he finds out he basically killed a beloved gorilla? Probably bad, right? Glad I’m not that kid. Nobody’s gonna go to prom with a gorilla killer. Well, I did, but that was different. I was desperate.

By examining the claims of conspiracy theorists, debunkers, and then rebunking with Harambe’s own thoughts by allowing him to use me as a writing vessel, we’ll see if we can’t get to the bottom of this sticky situation. Sticky like glue. Gorilla Glue. Only $5.47 a bottle at Home Depot.

But forget Home Depot. Time to go to Harambe Depot. Where truth is always on sale and everyone gets shot.

Conspiracy Claim: Harambe’s murder was brought about by a foreign government to stir up controversy during the already tumultuous 2016 Presidential Election. The foreign power, probably China or a country other than China, figured the death of a prized gorilla would lead to revolts and riots that would bring about the end of the United States.

Debunking Claim: No. Harambe was put down to protect the safety of the young child that fell into the gorilla enclosure. That is all.

Rebunking Claim: If you don’t think Harambe’s death was political, I’d like some of the drugs you’re taking. Actually, whatever your thoughts on Harambe’s death may be, I’d like some of your drugs. I run an understocked pharmacy. Regardless, it wasn’t a foreign power that brought about Harambe’s shooting. An American orchestrated the whole ordeal. An American who had the most to gain from glorifying a zookeeper’s rifle saving a child’s life: Donald Trump. The crack of that rifle stirred Americans’ belief in their Second Amendment rights and gave a surge of approval for the Republican Presidential candidate. Of course, Trump just had to take it one step farther… 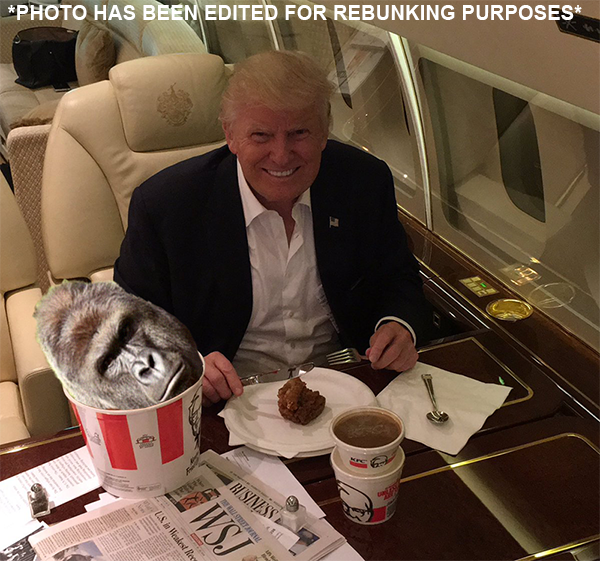 Conspiracy Claim: Harambe’s death was just a means for publicizing the struggling Cincinnati Zoo. The media storm surrounding the story has provided amazing advertising and brought the Zoo millions of dollars.

Debunking Claim: No. The main focus of zoos is to take care of their animals and educate the public, not to make money. A zoo would never cause one of its animals harm to increase its income.

Rebunking Claim: Harambe’s death was certainly a publicity move, but not for the ever-successful Cincinnati Zoo. Unbeknownst to most, Harambe was part of an ensemble cast for a new Harambe-based Baywatch reboot for NBC, Harambewatch. After middling reviews from test audiences, the network knew that unless they could stir up some buzz for show, it was doomed to suffer the same fate of the cancelled Seinfeld spinoff, Newman’s Own: Mailman Detective. After multiple failed attempts at killing David Hasselhoff, NBC determined killing a gorilla would be easier. So they hired a very talented three-year-old child actor to “fall” into the enclosure, and now have the publicity only killing a gorilla can get you. Check out Harambewatch on NBC every Thursday night at 9:00 PM EST/8:00 PM CST. 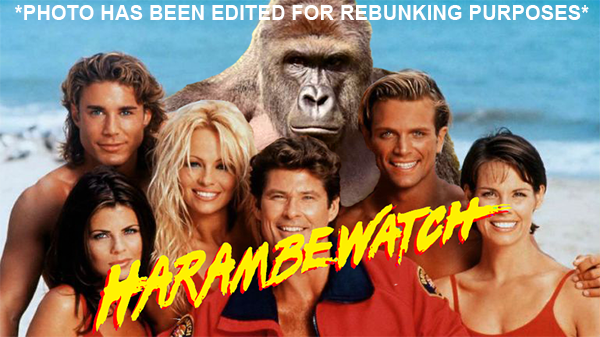 Conspiracy Claim: The Biblical Book of Revelation details the end of the world involving seven spiritual figures. One of these is a “dragon,” a term used in Biblical times to describe various unknown creatures, the noble gorilla being one of them. Thus, Harambe is one of the seven spiritual figures spoken of in the Book of Revelation. The fact that H-A-R-A-M-B-E is also seven letters long proves that the Apocalypse is near.

Debunking Claim: No. That is utter nonsense based on not a single fact other than Harambe’s name is seven letters long, which is inexplicably true.

Rebunking Claim: The Book of Revelation is a Biblical red herring when dealing with Harambe. What one must realize is that HARAMBE is an anagram for ABREHAM, the true spelling of Abraham, the Biblical figure who was willing to sacrifice his son Isaac to show his faith in God. Harambe was Abraham reincarnated in gorilla form, proving that all-important people from the Bible come back in some form as a gorilla. Abraham was Harambe, Goliath was King Kong, and Jesus is Koko, the gorilla that uses sign language in order to make sure it doesn’t get crucified again. 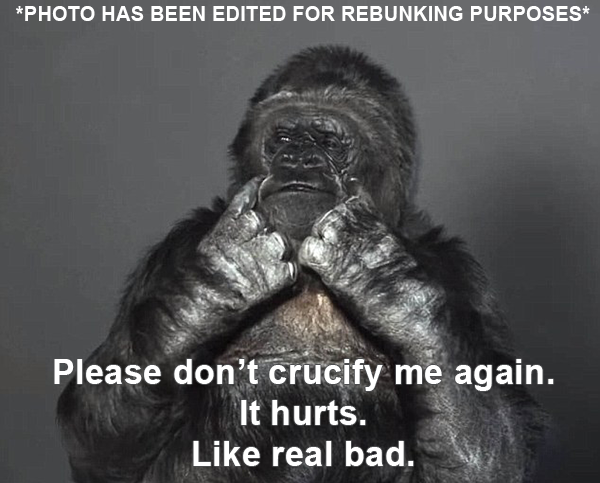 Conspiracy Claim: There never was a Harambe. The Cincinnati Zoo used the money they were supposed to buy a gorilla with to purchase a chocolate fountain for their employee break room. The special branch of the IRS in charge of making sure zoos have all the animals they claim to have and don’t have any chocolate fountains they claim not to have was about to visit the zoo, so the whole “Harambe got shot” story was fabricated and “witnesses” and “footage” were manufactured.

Rebunking Claim: Harambe was real. And he really was in the Cincinnati Zoo. He also really didn’t want to be in the Cincinnati Zoo. Not because he was locked in a zoo, because he was locked in a zoo in Cincinnati, Ohio, a city consistently ranked as the Most Least Ranked City in Ohio, the Most Least Ranked State in America. That’s why Harambe faked his own death: to get the hell out of Ohio. The small child and the zookeeper who fired the “bullet” were old pals of Harambe who wanted him to do what they never could, get out of the Buckeye State and make something of himself. So where did Harambe go? The place least like Ohio: the next state over, Pennsylvania. He’s in a zoo there under a fake name that has everyone fooled. 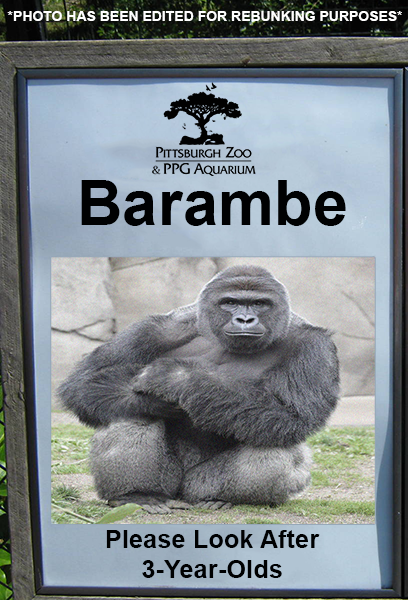 Conspiracy Claim: Harambe didn’t actually die and will soon exact his revenge on the world that wanted him gone.