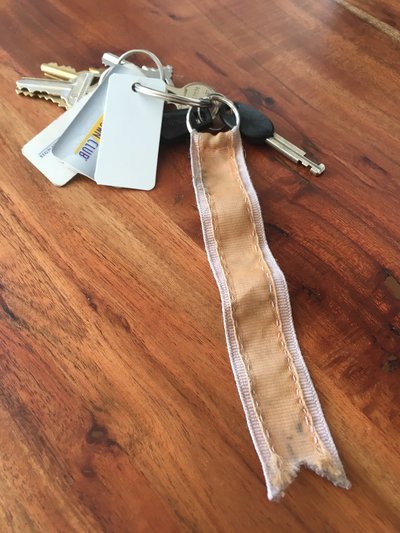 In high school, I joined the Drama Club and was in all the school plays. My sophomore year, I had only small understudy parts and even smaller non-speaking parts, but I loved every second of it. A senior named Cera took a liking to me and we became friends. At the end of that year, she made ribbon key rings for all the “drama girls,” in their favorite colors. I was obsessed with the color combination of pink and orange at the time, so she hand-sewed an orange ribbon on top of a pink one for me. I had no key ring to add it to (I had no need for one, what with my easy suburban teenage life featuring a chauffeur named Mom and a keypad on the garage door), but I remember Cera telling me I could use it once I got my driver’s license.

When I did start driving, though, I didn’t add the ribbon to my new key ring. I loved how clean and pretty the ribbon looked pinned up on my bulletin board, and I wasn’t ready to dirty it up. I treasured it as a token of my friendship with Cera, who by that time had left our small California town and moved to New York to study theater, which was exactly what I wanted to do.

A few years later, in 2006, I went to NYU to study theater myself. For the first time, I really needed keys on a daily basis. Anticipating this, I’d packed the ribbon so I could put it on my new dorm key ring. I also let Cera know I was moving to New York and arranged to meet her at a cupcake shop in Brooklyn. It was my first time taking the subway outside of Manhattan, and it felt like traveling to another country, even though it was only two stops from my dorm. I don’t recall what we talked about, but I remember feeling that she seemed so much more grown-up than I could ever dream of being.

I haven’t seen or spoken with Cera since that rainy autumn day, but I’m still grateful to her for being such an inspiring role model. I know from Facebook that she married her college sweetheart and moved to London. From what I can tell, she isn’t working in theater anymore, and neither am I. But we both still seem to be pushing the boundaries of our worlds further and further from the small town where we grew up.

I’m no longer obsessed with pink and orange, either. Now I mostly use the ribbon as a handy rope for yanking my keys from the bottom of my backpack. But sometimes, when I catch the tattered, faded old thing running through my fingers, I can’t help but smile.