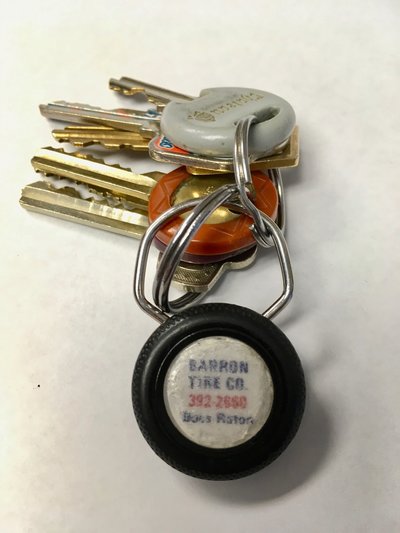 As a child in the 1970s and ’80s, I helped my dad choose slogans for his small tire shop in Boca Raton, Florida. “A Deal for Every Wheel.” “Blow In Before You Blow Out.” In case the slogans weren’t enough to generate business, he also had a bunch of promotional plastic tire key rings made for the store.

When he passed away in 1988, I saved about a half-dozen of them, and I’ve kept one on my key ring ever since. Over time, the plastic grows cloudy so the store name and phone number can no longer be read, and eventually the spokes on the other side and the “tread” wear down so that it’s barely recognizable as a tire. When that happens, I pull a new one from my stash, unwrap it, and start over.

I have only two plastic tires left now, so I’ll keep my current one as long as I can, in memory of my father and his salesman spirit.