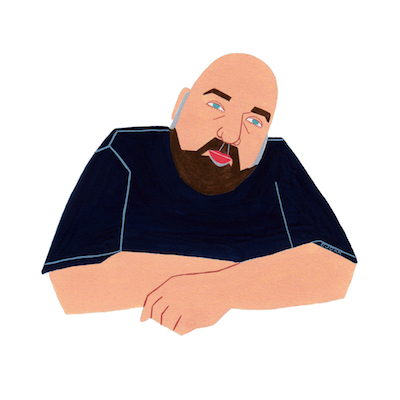 Steve moonlights as a karaoke host at various bars. He’s the best. A stout man in his early-middle years, Steve manages to infuse all situations with a plain-dealing optimism, just as the upstairs neighbor does in Tony Orlando and Dawn’s 1970 easy-listening masterpiece “Knock Three Times.” I’ve come to associate him directly with the song, because I’ve heard him use it as his warm-up so many times. I’ve been seeing Steve at his gigs more than a decade, so I’ve gathered a load of facts about him. On top of maintaining his consistent late-night schedule, for instance, Steve’s got a full-time day job at a waste-and-recycling company. This routine seems impossible to me, but he’s used to it. He worked a whole lot more when he was younger, he says. Steve’s also a father to three adult children, a fan of Bob Seger, and an active bowling hobbyist. A couple times a year, he and his league vacation together in Vegas, where Steve enjoys going to shows and lounging alongside pools of Windex-blue water. Also, Steve is solidly bald. He used to wear a hairpiece, but then he stopped in a spectacular way, through social media. He posted a picture of it on the floor of his shower, all soaked and wadded. The caption suggested it had slid off by accident. No one saw it again.

Steve lives as a bachelor in a distant neighborhood, in a top-floor condo with giant windows on every wall. So much white sky brings the space a placid feeling. The living room is tidy and contains unsurprising items: various sports memorabilia, wildly comfortable lounge chairs, a good entertainment system. Steve visits the Twilight regularly, so I begin by asking whether he’d previously met James and his girlfriend.

He hadn’t. “They were described to me as day drinkers, so we wouldn’t have been in the bar at the same time,” he said. Steve’s first encounter with James happened the night of the shooting. “I’d gotten up to use the restroom, and when I came out and was walking back, James was standing there, screaming at the bar. I thought it was directed at someone I knew, and I thought, ‘Now why would the hell would he be yelling at her like that?’ I started to step over, and Greg was already there. He was pushing James towards the door, so James was leaving backwards, and he kept looking into the bar. I had a moment of eye contact with him. I wanted him to know there was more than just one person there, so I gave him a look that said, ‘What the hell, dude.’ I saw his eyes then. He had the crazy eyes. He was incensed. I was like, ‘This dude is straight-up crazy.’ Out the door he went.”

Steve passed the incident off and returned to his traveling karaoke stand, with its plastic milk crates and stacks of binders and discs the size of frisbees, flashing with silvery rainbows. (Fun fact: Throughout the years, Steve has come to memorize the number-letter codes designating every song in his collection. There are about five thousand.) “I was probably a half hour into rolling songs,” he said. Someone was was singing Tina Turner, and George Michael’s “Faith” was up after, Steve remembers. “I’d already pulled the disc for it. When the other song ended, I’d put the new disc in, and I was almost going to announce into the microphone who was next and fire up the track. That’s what I was doing when I heard the first pop. It was such a large bang. I thought it was a balloon or a firecracker. It seemed like it was coming from the jukebox. But after the second shot, I had no doubt what was going on.”

James entered, gun in hand, and he crossed the far end of the dining room on his way to the lounge. Police records suggest there were about two-dozen customers with Steve in the dining area. “Everybody hit the floor. I mean everybody,” he said. Steve got down too, shielding himself behind a Pac-Man cocktail-table arcade. “Nobody was standing. Everybody was down. Then the most awkward thing happened. The next song started. The music actually came on right then. You know, I didn’t want to be the one person in the bar to irritate the guy with the gun. I was scared, I was on the floor. I thought to myself, ‘I have to stand up. Shit.’”

(After the pop, I heard only screaming. I don’t recall hearing music, so I ask Steve what the song was, whether it was “Faith” or some other track at the start of the disc. “I don’t remember,” said Steve. He stopped and looked into a middle distance. A short moment went by, and then he said again, with confidence, “Yeah. I don’t remember.”)

Steve took care of things fast. “I got up, reached over and I pulled the volume buttons back. While I was up, I swiped the shuffleboard trough to get what I could. I’d always put my keys there, and two phones. One was my work phone. I wasn’t able to grab everything, but I did grab that. I turned its volume off and immediately got back down on the floor.”

James disappeared behind a bend as he approached the back corner of the horseshoe bar. “I couldn’t see what was going on, but here’s what I’d assessed, and this was all the assessing I needed. James’s attention was not on our half of the bar. Maybe that brief encounter I’d had earlier kind of clued me in. Right away I’m thinking, ‘Crazy fucker in the bar. There’s a crazy fucker in the bar with a gun.’ But I didn’t get the sense he was gonna kill everybody. There was nobody approaching us, nobody looking at us. There was nothing holding us there.”
“I was really concerned about my tiny environment, the area running parallel with the shuffleboard table. I was at one end of it, and I needed to be at the other end. There’s an emergency exit there,” said Steve. “I go in and out of the door all the time when I’m loading my gear, so I knew the alarm wouldn’t sound,” he said. A couple young women, friends of Steve, were right in front of the door. “They were frozen. I don’t think they knew the exit was there, and I sure wasn’t going to knock them over running past,” he said. After Steve got their attention, the women opened the door and bolted outside. “They were the first and second out. I was the third. The girls went right and I went left. I never turned around. They didn’t either. They ran home. They lived only a block or two away. Once they hit their front door, they never came back,” said Steve. In the months after the shooting, one of these women met with Steve. “She thanked me a billion times for telling her to get the hell out the door, but my actions didn’t feel heroic to me,” he said.

Steve ran to the mini-mart next door, called 911 and the bar owner, and waited with a group of witnesses, including two I’ve mentioned in-passing: the lady friend Dave had been on a date with, and the guy in the wheelchair who was hanging out with Ryder. “I thought a lot about the cop who had to enter that unknown situation, with no windows,” said Steve. Later that night, as he boarded the witness bus, “I was completely focused on Steve-O’s pants. They were saturated with blood,” he said. The blood was Greg’s, and “the events that led up to him not dying are crazy,” said Steve. Several precise and seemingly random things had to occur, and in a certain order. I’ll get to them later.

The evening after the shooting, Steve returned with his son to the Twilight. He needed to retrieve his karaoke equipment and his car. He’d parked it in the loading spot directly in front of the building, and it’d been cordoned with police tape until the forensic team finished processing the scene. “[The Twilight’s owner] called me when they gave him his bar back, and I came right over,” said Steve.

“It was eerie. I saw some of the bullet holes. There was an insane amount of blood on the floor. The owner said he’d have to hire a professional to clean that up, but a couple staff were there and cleaning what they could. They wanted to get the bar reopened fast and get back to business as usual. They’d put what was left behind on a big table, all the purses and cell phones. I remember seeing Darrel’s disc case on the table. He’s a professor at UW, and he brings his own music. He sings Mumford & Sons,” said Steve. These items were transported to the Twilight’s sister bar nearby, where people would trickle in and reclaim their belongings.

Most witnesses had no reason to enter the Twilight before its official reopening, other than Steve, but Lexi and I had stopped in as well. Things were crucial for us. We’d abandoned our keys, jackets, money, and cellphones in the bar during the rush to escape. Without them, there wasn’t much to do but wander the sidewalks together the following day, laughing at all our hilarious misfortunes, but sometimes crying about them too. Steve wasn’t there, and right after we grabbed our stuff, we split.

As I was leaving Steve’s place, his son entered the room. He looked about 20. He greeted me, then handed me his cell phone. The screen showed the puddle of blood where James had died, inside the bar. I’d seen it there too that evening I’d returned. The image matched my memory. I looked at the picture a long time.