Take It Easy and Only Work a Hundred Hours This Week: A Review of How Good Do You Want to Be? by Nick Saban 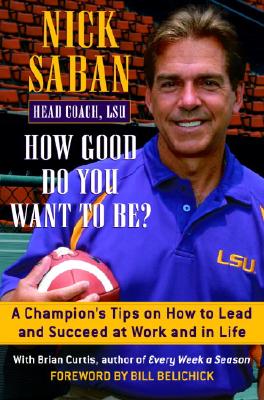 Under Review:
How Good Do You Want to Be?:
A Champion’s Tips on How to Lead and
Succeed at Work and in Life
by Nick Saban with Bryan Curtis
(2005, Ballantine Books, 221 pages)

In a profession consisting almost exclusively of anal-retentive hard-asses—that profession being college football coach—the University of Alabama’s Nick Saban stands out above the rest for the thoroughness of his hard-assery.

Last fall, sports journalist Warren St. John wrote a terrifying profile of Saban for GQ, rife with fantastic anecdotes about the coach’s decidedly non-human work ethic. Example: shortly after leading the Crimson Tide to their third national championship in four years, Saban harrumphs with sincere pessimism to a golf buddy that the extra time spent preparing for the big game cost Saban valuable time recruiting high school players. Saban’s dour perfectionist logic of course turns back in on itself: he would rather try to find new players to help him win championships years down the line than to actually compete in a championship game with other players he once worked so hard to recruit. Ah, but so it goes with any enabled and determined perfectionist.

Saban’s self-help book, How Good Do You Want to Be?, was originally published in 2005, when he was the coach at Louisiana State University, where he also won a national championship. The book has since been given a facelift, a new cover with Saban in a breathable Alabama polo instead of a breathable Louisiana State polo—the actual content within remains, admirably, the same. It’s a suave cash grab by a man who earns $6.9M a year in his day job, a man who inserts mission statements from Starbucks and Delta Airlines into his prose as sources of inspiration.

And yet I don’t think Saban is an archetype of a totally synergized, motivational-speech-giving corporate landscape. More like Saban is best appreciated when thinking of him as a tragic hero hewn from the pentameter of B.C.—vintage fable—a general who, no matter how many battles he wins, is endlessly fighting the battles of his youth—the unforgiving landscape he grew up in, and the unforgiving father he grew up under.

Nick Sr. ran a service station in West Virginian mining country—at “the intersection of Route 19 and Helling’s Run”—and demanded perfection out of Nick Jr. as both a service station employee and member of the Black Diamonds Pop Warner football team. Who knows why the following anecdote about Nick Sr. was included in Nick Jr.’s book, bursting as it is with familial neurosis? The scene is a parent-teacher conference gone awry:

I was getting a D in music class. My father was fuming as we walked out of school. He drove me to the mineshaft at Ida May and threw me into the elevator, hit the button, and down we went. When we reached the bottom, he turned to me, his face glowing red in the deep black. ‘Is this what you want? You want to work down here the rest of your life?’”

Well, that would be quite motivating! And so Nick Sr. molded a person incapable of unclenching either his butthole or his heart, lest imperfections creep in. A man who regards a 100-hour workweek as easing his foot off the pedal:

You can always do more, but I have found that a hundred hours a week is enough.

We had just won the BCS national championship, LSU’s second national title, and instead of savoring a sense of overwhelming joy, there I was thinking about what we could have done better.

Believe it or not, some people are not wired to accept success. They don’t really enjoy it; they are more content going back to work than reveling in success. I guess I am one of those people.

While one can only imagine how brutal this approach can become in the middle of a hot summer practice, St. John comes to the conclusion that Saban is at least wholly honest: “There’s no guy behind the guy, just the one you see, the one trying like hell to smile after a big win and just not quite feeling it.”

This aversion to deception is, as it turns out, quite a positive trait for a self-help author. Unlike plenty of other self-help books by professional athletes, there is at least a tangible and usable nugget of advice at the center of Saban’s book. That is, just outwork everybody, all the time:

Most things that are worthwhile are difficult, and your willingness to work through those difficulties will set you apart from the competition.

Of course Saban’s not talking about avoiding a YouTube tunnel here or rising without hitting the snooze button un-pressed there. He’s talking about a decades-long string of 100-hour workweeks, one after another stretching on and on until you can’t see your life being anything else.

The ability to jump into a 100-hour workweek is what makes Saban a devastatingly good football coach, easily the best of this generation and somewhere among the all-time greats. It’s also what had him out on a recruiting trip when his first son was born. To achieve Sabanian levels of success as a football coach is impossibly hard and would tear any normalcy in your life asunder. But it is, at least, remarkably simple.

Baricco traces the trajectory of a revolution in the way we think, feel, and communicate—and seeks to discover what it might actually mean for our future.