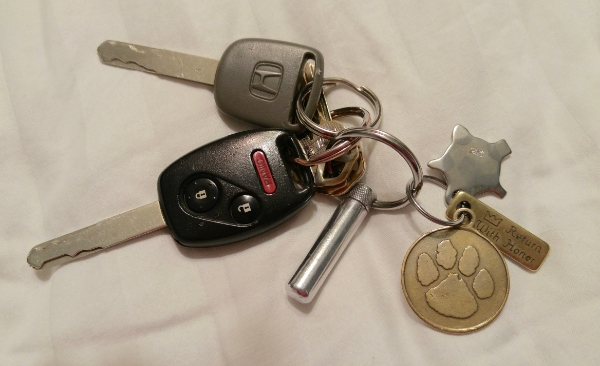 My grandpa worked as an architect in New Zealand and a few other South Pacific islands for a couple of years. While he was there he became interested in the local woodcarving culture and became a good carver himself. I later inherited his tools, which came in handy in 1997, when my high school ran a pumpkin carving contest. I figured I’d have a good shot at winning if I tried something other than the typical jack-o-lantern approach, so I grabbed my grandpa’s tools, came up with a cool Maori tiki head design with intricate details and a menacing scowl, and won the contest. Our school mascot was husky, so my prize was a husky paw medallion, which I’ve kept on my key ring ever since.

A few years later, when I was preparing to leave for college, my mom gave me a little trinket with a “Return With Honor” inscription. She never really explained anything about it to me, but I think it was just a reminder that she knows I have great potential and should live a good life in a way I can be proud of. I’ve kept that on my key ring as well.

A few years after later, after I graduated from college, I bought my dad’s old car when he upgraded to a newer model. The car’s key ring included a little metal disk with different-sized screwdriver tips. My father has always taught me to learn different skills by diving in and figuring things out by trying, and he’s always stressed that the right tool can make a specific job much easier, so the screwdriver tips are a nice symbol of that.

These three items are a good reminder of the wonderful family I have, and of how they’ve helped me become who I am.

Spilt Milk is out now