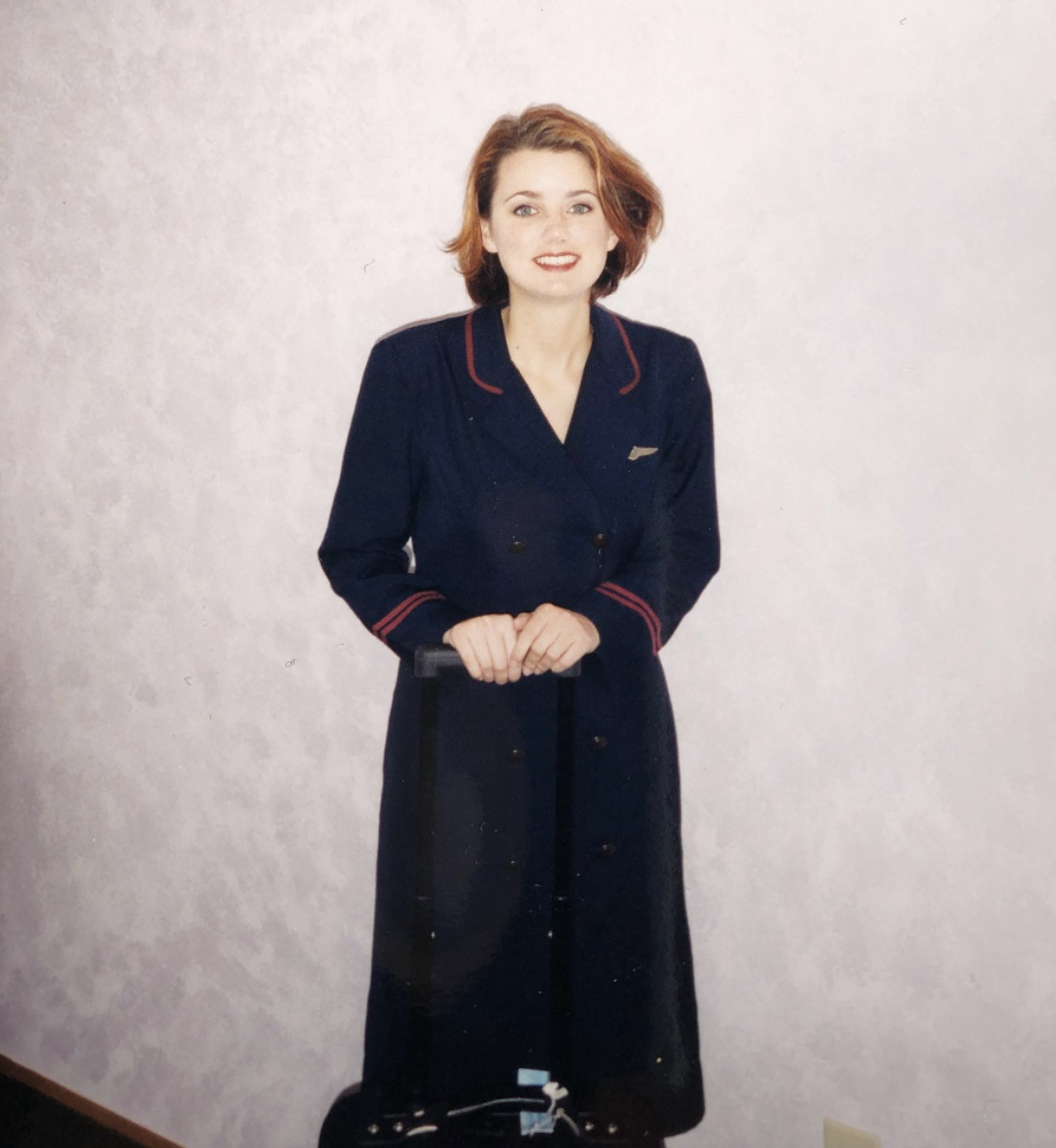 Q: How does one become a flight attendant?
A: The training varies by airline and it can change over time, but it’s usually somewhere in the neighborhood of six weeks. It can be longer or shorter depending on how many airplanes the airline has. At United, we had twelve different types of airplanes to learn.

Q: What’s the training like?
A: Part of the time you’re learning about the service — from pushing beverage carts in the back to identifying fine wines and cheeses and pouring champagne and folding linens in the front. There was still a little glamour when I started in 2000.

A lot of the time it’s emergency training. You’re learning first aid and CPR, everything to do with evacuating the airplane and fighting fires…We practiced using the defibrillator, calling for medical assistance, physically evacuating the aircraft, getting into rafts…

Every single time you’re taking off and landing, when you’re sitting in your jump seat, you’re preparing for the unlikely event of a crash, so if anything ever happened you wouldn’t think about it, you would just do it.

That’s how they’re able to evacuate so quickly, even in crazy circumstances like landing on the Hudson River. They had thought of that, multiple times, over and over every day.

They also teach you makeup and hair.

Q: How was that?
A: It was fun and also funny in an anachronistic kind of way. We were in a training center with all of the uniforms from back in the glamour days. That was kind of fun.

Most airlines still have really strict grooming rules — it’s just a question of whether or not you’re going to get in trouble if you don’t follow them. We had a 39-page handbook with pictures of acceptable and unacceptable hairstyles. Fortunately, mullets and pigtails were on the unacceptable list.

We learned how to make a French twist, buns, things like that. They also had a makeup artist, which was kind of cool because I never knew what I was doing with that stuff. They had you learn about shades of lipstick, how to line your eyes so that it’s tasteful…

The men learned things like moisturizer and plucking unibrows and grooming facial hair… If you had a spiky gel situation they might encourage you to come up with something more natural-looking.

Q: What was the schedule like?
A: I was on reserve, which means you’re on call twenty-four hours a day, about eighteen to twenty days a month.

Every day is different. You could go anywhere with two to four hours’ notice, and work in any cabin on any airplane. You get to a point where you just show up and you don’t necessarily care where you’re going anymore.

Some people have what’s called “a line.” They know what their schedule is going to be for the next month. Depending on the airline and where you’re based, it can take like twenty years to get to that.

Q: Do you remember what it was like when you first started?
A: When you’re brand new, every single time you take off and land, you’re making sure everyone has seat backs up, tray tables up… At first, you really have to look and you don’t have much time to do that.

Later, anything that’s off just stands out. My husband is a pilot and says the same thing, even though there are a trillion buttons and dials, they know instantly if something is off at all, it just jumps out at them.

It can take about two years to get good at the job because it’s different every single day. For example, being in charge of the galley on an international 747 is extremely complicated. I came to the job with a degree from a prestigious university, but that galley tested my wits.

Q: Was it hard not to hate people?
A: That’s one of the things I miss most about the work — the people. My favorite part would be saying goodbye at the end of the flight and recognizing so many faces from having so many little interactions.

Sometimes people are grumpy with security and all the nickel-and-diming. I remember one guy — he was in such a bad mood, complaining and bitching at everyone. I said to him, “I know you’re having a bad day, but you have a great pair of shoes.” It turned things around instantly. He was so happy for the rest of the flight. It shows you how little it takes to make someone’s day.

Q: Did someone train you to say that?
A: No, it just came out of my mouth and it made his day.

People just need to be noticed. It shows you how quickly interactions between humans can change.

Q: OK, I have a few hot-button topics. Did you drink the coffee and tea and is it from toilet water?
A: It’s not from toilet water. People get concerned because of the piping that brings the water into the plane, but I drank the coffee. If you’re traveling all around the world, you can’t be that much of a germaphobe.

Q: Have you caught people in the mile-high club?
A: My best friend has caught somebody, but I never have.

Q: The bathrooms seem small and sticky anyway.
A: On the 777, the handicapped bathroom is a bit larger. So that is where you would want to go.

Q: What are the pilots like and did you flirt with them?
A: We knew how to interact in case of an emergency, but otherwise we had very little interaction with the pilots.

At United, there was an unwritten rule that flight attendants did not date pilots. It happened now and then, but it was very rarely done. Part of it was the different personality types, but we also didn’t layover at the same hotels.

One reason we heard was that the company wanted to divide and conquer the different workgroups, so we couldn’t all get together against the company for better contracts.

Some of the pilots said that the reason was that years before, the pilot’s wives club pressured the company to keep them separate so the husbands didn’t cheat.

Q: You said your husband was a pilot?
A: Funny, I know. We met on match.com when I wasn’t flying anymore.

I could count on one hand the flight attendants that were hard to work with. We had this motto that nobody’s done until everybody’s done. Everybody pulled their weight.

Q: When you get on the plane you’ve never seen the other flight attendants before?
A: Most of the time. It’s funny, you’ve never seen them, you sit in the jump seat with them, and during takeoff, you tell each other your life story, like every single dirty detail. You learn everybody’s secrets and then you never see them again. People call it “jump seat therapy.”