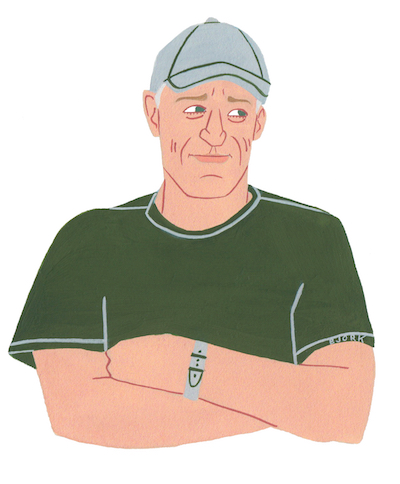 Darrel’s a geology professor, and I meet him at his office on the University of Washington campus. The room is snug, quiet, and stacked with books, and Darrel sits at his desk. He’s a tall, white-haired man in a button-down shirt who listens carefully before he speaks. His sentences are deliberate, and he often closes his eyes as he’s forming his thoughts. I take to Darrel at once. He’s bright and a little silly and has an encouraging presence I suspect his students adore. As we begin to talk about the shooting at the Twilight Exit, Darrel makes clear he wasn’t left traumatized. “I can truly say I don’t think about that night anymore,” he says. He’d come out that Sunday for karaoke and had been to the bar before. “I don’t drive after I’ve been drinking. I take the bus, and the route is very elaborate. So I would only go once every couple months or so. Some of my students like karaoke too, so we’d put it up on a calendar and meet as a group. Maybe six or eight would show up. That night I went by myself. I sat where I usually do when I’m alone, in the section between the bar and the dining area, where the table comes out into a peninsula.”

“I’d sung two songs. I can’t remember what they were, but I can look them up for you later. I keep a record in a little calendar. I write down what I’ve sung because I don’t like to do the same thing over and over again. It’s weird, I know. But I like to keep track. I go to karaoke a few places around town, and I’ll sing one or two songs. Some go over well, and I’ll place a checkmark next to them. I’ll note if I need to change the pitch or something. It’s just for my own reference,” he said.

As Darrel was seated, “I heard this pop pop pop. I’d never heard the gunfire from a handgun, so the first thing I thought was, ‘Why is somebody setting off firecrackers in the alley?’ We do summer field geology in Montana, and sometimes as a joke, somebody would set firecrackers off. I looked at the door. I can remember some of what happened next. I saw the guy come in. I saw he had a gun that I think was silver-colored. It was exposed, and it was aimed. He walked right past. At that point, I ducked under the peninsula.”

“The place went crazy. People were screaming, people were running. I’m glad no one else was packing heat, because it would’ve been even worse. It was chaos,” said Darrel. “Some believe that if everyone were armed, this kind of thing wouldn’t happen. But that would’ve been the last thing we needed. If anybody would’ve tried to go after this guy, more people would’ve been hurt and killed,” he said. (A passage from Zusha Elinson’s Wall Street Journal article suggests armed civilians bring almost zero advantage in comparable situations: “It is rare that a mass killer has been stopped by a citizen with a gun. An FBI study of 160 active-shooter incidents found that just five of them ended when armed citizens who weren’t law-enforcement personnel exchanged gunfire with the suspect.”)

“It could’ve been even worse, and we were lucky the guy didn’t just open up like that nut at Cafe Racer,” said Darrel, referencing an earlier Seattle bar shooting that left several dead. He continued. “I’m not a second-amendment freak. I have no problem with responsible gun ownership. There were guns in the house when I grew up. My brother and my dad and I would go out together and shoot our .22. Others have different viewpoints, but I think there are just too many guns in this country, even if that’s something that’s not gonna change.”

Returning to night of the shooting, I ask Darrel to explain what happened as James walked through the dining room and into the bar area. “I was sitting there, crouching under the peninsula,” Darrel said. “Everybody else was running. I thought, ‘I can’t stay here.’ I got up and ran into the little room with the pinball machines and cowered behind one of the video games. There was a big black door back there, and the sign above it said Exit. But the door was padlocked. When I saw that, it gave me a really bad feeling. ‘Oh, shit,’ I thought. ‘That’s not right.’” 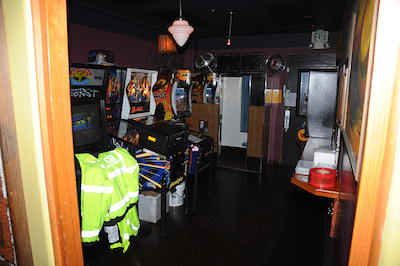 The game room of the Twilight Exit.
Photo courtesy of the Seattle Police Department.

“I looked out and saw the bar was empty. I heard more screaming. I heard, I think, more shooting. I didn’t know who he was shooting. He might try to find other people. I thought, ‘I’ve gotta get out of here.’ I ran out, right through the door. There was blood. It was Greg’s. I came out that door, and I saw him. I saw a crumpled-up body, and there was blood. That really made me run.”

“I ran down the alley and hid. I waited until I heard police sirens, then I walked back to the bar. Everybody was standing around. I was kind of shaken, but it was pretty clear that other people were much more disturbed than I was, just from their expressions. One gal looked really distraught. A couple others were crying. We didn’t know what was gonna happen. Someone told us we had to go to the police station. I don’t smoke, but somebody had a clove cigarette. So I did. Just for fun I guess. I’d left my fleece in the bar, and a jacket, and ski gloves. I was there in just my shirt, and it was cold outside.”

A couple days later, Darrel would visit the Twilight’s sister bar to retrieve the items he’d left behind. According to an entry in Darrel’s journal, he’d showed up at 4:50, then a pair of bartenders gave him a complimentary Manhattan. (After we’d finished our in-person interview, Darrel promptly sent me a follow-up email containing selections from his calendar diary, just as he’d promised.)

Reading Darrel’s other entries, I notice his neutrality, his consistent use of time notations, his inclusion of seemingly minor details. So much blandness abruptly becomes fascinating. The shooting, when referenced at all, takes on a distant quality. “Perhaps it conveys my state of mind. I think I just sort of let it go,” said Darrel.

The day after the shooting, Darrel began his 2:30 class by relating what happened the night before:

Felt the need to tell people… rough e-mail with [my cousin, sort of a gun-lover]… Facebook chatter about the Exit.

Woke 7-ish Sunday on my mind…

A couple weeks later, abrupt sounds would affect Darrel, though “I won’t say I was freaked out,” he said. An entry notes his 8:30 arrival at a karaoke bar decorated for Mardi Gras. He considers it one of the only times he felt nervous at a public venue:

Small crowd… then a balloon popped—several more. I didn’t like it. Sang ‘Devil Woman,’ told Jon I had to leave. Taxi home 9:30-ish. A little tense.

As far as the Sunday entry covering the actual shooting, said Darrel, “I must report that I wrote very little. I added it the day after because I got home so late. It reads:”

An ordinary day. Walked in drizzle to [a hardware store] for switch cover and Super Glue. BBQ’d ground beef. Then to Twilight Exit by 9:20—and it all came down. Home, taxi—bed ~ 2:30.

“And now for some real trivia,” Darrel wrote me. “That night, I sang “Play Me” by Neil Diamond, and then “Just Breathe” by Pearl Jam. Both of these were from my own CD’s, which the karaoke host Steve kindly plays for me, or anyone. Of course, in the chaos, I wasn’t able to pick up my Pearl Jam CD, but Steve said he found it! Evidently, “Play Me” got a good reaction from the crowd, because I placed a checkmark next to it on my calendar. My jottings are: